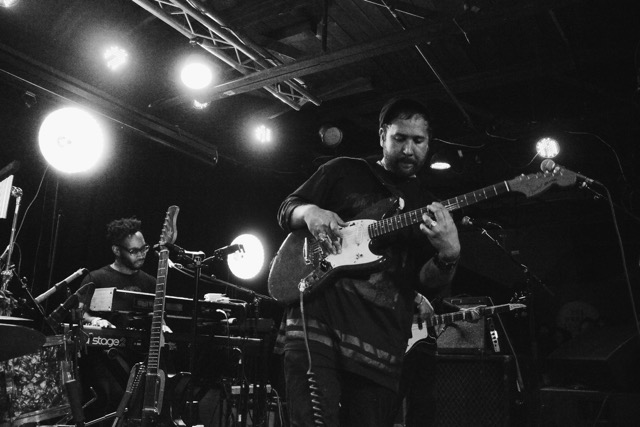 Everything was just as it should be as I sat twiddling my thumbs inside the Urban Lounge. Then, life changed in an instant as Unknown Mortal Orchestra’s lead singer, Ruban Nielson, tapped me on the shoulder, and asked if I could join the band on stage when the time came.

SYKE. It was just a regular night at Urban Lounge with my regular excitement to see a top Indie band, Unknown Mortal Orchestra, play a live set of their new album, Multi-Love. Well, it was almost regular.

If you follow popular indie music then you’ve probably heard of Toro Y Moi. Toro just started a record label called Company Records, and Unknown Mortal Orchestra’s supporting band, Vinyl Williams, is one of the few acts signed to said label. Toro is a major influencer in indie music and anything he does gets me excited. So, naturally, I was really excited to hear Vinyl Williams live. It’s always a special night when you’re interest level for the opening band, and the headlining group, is at the same level. But, sometimes the hype is real, and sometimes it isn’t.

Vinyl Williams is a four-piece made up of hippies seemingly obsessed with jazz and psychedelic music. They have long hair (one has dreadlocks), wear vintage clothing and their volume and chord progressions are off the charts. They’re intriguing as a whole, but their set felt like performance art—there was a groove and rhythm missing from all of it to really enjoy. There were psychedelic graphics being projected behind the band, swirling colors across the stage and some intense drumming, but it all became repetitive and extremely loud after a few songs. Although I found myself losing interest, the roar of audience applause continuously surprised me after each number, and Vinyl left the stage to a satisfied crowd.

I gladly conversed with old friends until I heard the audience begin to scream as Unknown Mortal Orchestra walked on stage, greeted by a promising set of equipment. Their drums had a set of bar chimes in front of them, and mini tambourines were attached to the drumsticks. There were two sets of analog keyboards and a few different guitars. They also had their own sound technician, which is always a good sign. UMO had every element required to give us a dialed performance, and that’s exactly what they did.

The members of Unknown Mortal Orchestra’s live band each had a special presence about them, but it was Nielson’s sheepish smile, as he walked on stage, that sticks out in my mind the most. It was as if he knew we expected a brilliant performance and that, even if he didn’t feel like wowing us, there was an energy in the room that wouldn’t allow anything but brilliance.

I have to admit I wasn’t the biggest fan of Unknown Mortal Orchestra’s latest album, Multi-Love, but I knew it was an exercise in psychedelic soul, which is very appealing to a brother like me, and I knew what the album was about. Multi-Love is a bizarre tale of love that involves Nielson and his wife falling in love with the same woman and trying to integrate her into their family life. The story is so intriguing that my first thought when reading it was, someone’s going to make a movie about this experience. As Nielson performed the album’s title track on stage that night, he broke into a solo where it felt like he was communicating with his guitar, and that his guitar was the only thing that understood how he felt. The rest of his band seemed to stop and pay attention, and the crowd became quieter too. Everyone realized something was happening, but I don’t think many of us understood how real it was. A few people offered shouts of praise while the solo continued, but their applause felt more like attempts to comfort themselves amidst an experience that confused them. To them, it felt like the moment should be triggering cheers from the crowd, but somehow it had the opposite effect. Because at that moment, Nielson was reliving what he felt as he wrote “Multi-Love,” and to share in that experience called for more than applause, it called for reverence.

If you talk to people who went to the show, they’ll probably tell you how the perma-smiling keyboard player blew them away with bebop improvisations that were so extravagant they also called for unplanned solos and hushed recognition from the band. Yes, the night was full of solos from everyone but the bass player, who certainly held his own without playing a single solo. I even heard friends mention they felt like they were living a Soul Train experience. The excitement and pleasure in the room was at a high all evening. But, for me, it’s Nielson’s moments of intimacy, and imperfections—like when he drunkenly sat on a speaker right in front of us and sang “Stage or Screen,”—that will remain in my mind as the show’s highlights. That night, I realized Multi-Love was an album I had to experience live to fully appreciate.

I felt like we witnessed a near-perfect performance once the band left the stage, but I knew I had to hear one more song for the night to be complete. Unknown Mortal Orchestra didn’t take long to come back out, and they ended their encore performance with a high-energy rendition of my favorite song from Multi-Love, “Can’t Keep Checking My Phone”. I was ecstatic as I sang along with Nielson and the crowd. It was exactly how I had hoped the night would end, and as Nielson looked at the audience with his hands clasped together in the air, I can’t help but imagine the night ended how he wanted it too as well.