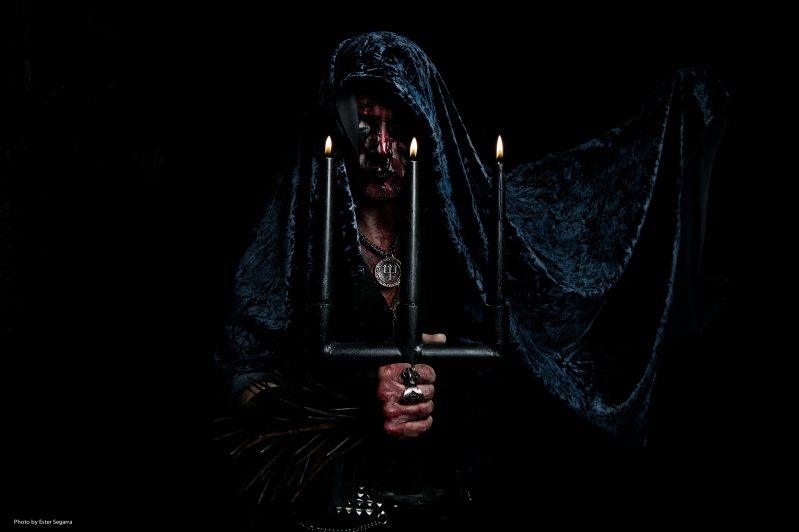 It was two days before I turned 37. I was already feeling like an old man. For starters, I got to the venue about 15 minutes prior to show start and went to get my ID. It wasn’t in my wallet. I had forgotten to put it back in because I had it out to register online earlier in the day. That said, the feeling came more from increasing cynicism—the whole “get off my lawn” syndrome. I’ll be honest: I came to the Watain headline show to see the other bands on the bill because I like them more, adding to that whole cynical lack of an open-minded attitude. Also, I had seen Watain well over five years ago, and the only thing I really remember is from the crappy photos I took. Despite those weird, almost-40 feelings, by the end of the night I felt 10 years younger.

Three bands on a bill will help anyone feel younger—some of the package tours these days have over five bands. (I can’t even make a positive statement without it sounding negative.) Since I had forgotten my ID and had to go home and get it, I missed about half of Ares Kingdom—the only band on this tour I had not seen. The three-piece consisted of Mike Miller (drums) and Chuck Keller (guitars) of the infamous Order From Chaos from Kansas City, Missouri. What I did get to see was more than I expected. Ares Kingdom play nowhere near run-of-the-mill death/thrash metal. As much as the band is about the riffs and rhythms, Keller dished out some mighty fine guitar solos. They were a good way to start the show. While they do have a lot of chaos infused in their music, there remains a bit of control in it, providing a good contrast to Destroyer 666.

Australia’s Destroyer 666 are not ones to disappoint, and their past live shows were not ones to forget. They played Salt Lake in 2010, and I’m pretty sure I partially broke my neck that night. The band, other than founding member KK Warslut, now consists of a new lineup. Musically, things have both progressed and stayed the same. They just released an EP, Call of the Wild, which, compared to some of the past raw black/thrash nastiness, is by no means tame—it’s just a bit more composed. Destroyer 666 performed the EP’s title track, as well as “Traitor” and “Hounds at Ya Back” from the last full-length album. The entire set blazed with speed and intensity, as did KK’s demeanor. He has an extreme dislike for people filming Destroyer 666’s shows, and early on he kicked a phone out of a concert-goer’s hand. It worked—after that, there weren’t many phone screens out, and if there were, the audience members holding them looked like they were attempting to bootleg a movie in a theater. While I didn’t break my neck this time around, I did have a nice grin afterwards.

On to the main event. I left my preconceived opinions at the door for Sweden’s Watain. Just because I never got into the band doesn’t mean they don’t have merit. One element of their live shows is the band’s stage presence—as the band set up, so were two animal heads. They looked like sheep or goat heads, but I could be wrong. Instantly, the venue filled with the aroma of rotting flesh. The stage darkened for the most part, aside from some candles on a type of altar, with a drum kit adorned with animal bones. It looked like something out of a horror movie. The black metal intensity from the band was an interesting contrast to the rough black/thrash of D 666. The pounding drums and consistent speed only relented in between songs. The band is on tour to support their new record, Trident Wolf Eclipse. I will admit that I don’t really know any of the band’s songs, give or take a couple from 2007’s Sworn to the Dark. So even though I’ve previously had the live Watain experience, tonight’s set came to pretty much new ears and eyes. Vocalist Erik Danielsson held up a horned skull–type chalice. I knew what was in it—I was just waiting for it to be dumped, and so was the audience. Given the dark lighting, when Danielsson finally threw what was in said chalice—pig’s blood—into the crowd, I couldn’t see who got hit or if people scurried out of the way. (I did not see any bloodstained folks afterwards.)

The black metal assault continued with the corpse-paint members, playing relentlessly on their instruments. Danielsson would perform acts and rites with a torch and candles on the altar, though I’m not sure what they were specifically. At one point, he held the fire the animal head, smoldering it before quickly putting the torch out in a flash of sparks. I do applaud Watain for doing something out of the ordinary for their shows. The Satanic elements are obviously highly prevalent, and Watain successfully make their audience feel like they are part of an occult ritual. While they have their music on record, those comprise only a fraction of who Watain are. With record sales less prevalent these days, the live show is more important than ever, and in many ways, I feel a lot of folks come to Watain just for the experience. That’s a huge achievement for any artist. I left that evening forgetting my dwindling age for the time. Youth comes from where you find it—or maybe a blood sacrifice! –Bryer Wharton