When I heard that Yellowcard would be in town, playing all the way through Ocean Avenue, I rounded up my high school besties and added it to our schedule to fit around babies, husbands, classes and full-time jobs––a lot has happened in a decade.

Yellowcard @ The Complex with Geoff Rickly 09.30 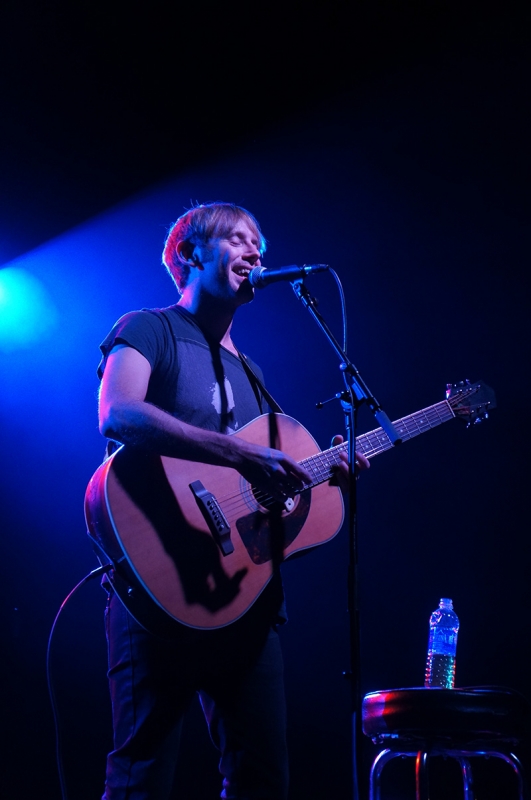 Geoff Rickly, looking exactly as he did 10 years ago. Photo: Esther Meroño

Ten years ago, in 2003, I was 16 years old. It was the year I gained a little independence with a driver’s license (but no car), started my first real job, attended my first concert with my friends, went on my first date, found my first boyfriend, had my first kiss, and experienced a taste of heartbreak, with a few poems to show for it. I wasted no time in becoming a stereotypical teenager. That summer, my family took a vacation to LA, hitting up the usual Disneyland, Universal Studios and the beach. I listened to a single album the entire time––Yellowcard’s Ocean Avenue. It seemed fitting, given my surroundings, and the lyrics were bipolar enough that they complemented all my feelings. They were also the only band I could claim to have found first, and introduced to my friends, which was a big deal for me, ’cause before I started listening to emo bands on the Warped Tour circuit, I had been limited to classical music and the Backstreet Boys.

So, when I heard that Yellowcard would be in town, playing all the way through Ocean Avenue, I rounded up my high school besties and added it to our schedule to fit around babies, husbands, classes and full-time jobs––a lot has happened in a decade.

The Complex is far from the intimate setting in which I like to experience nostalgia, and looking around at the crowd, I seemed out of place as one of the few heavily tattooed, "older" fans (in fact, the security guys thought I was touring with the band when I was in the pit taking photos, which deeply flattered my 16-year-old self). Fortunately, my self-confidence is no longer at teenage levels, so I settled in comfortably with my friends: a new mom away from her (adorable) baby girl for the first time in four months, and a world traveler just back from teaching in China for a year.

Geoff Rickly was opening the show, former frontman of Thursday (RIP), and admittedly, his name is what had originally piqued my interested. Through the early to mid–’00s, Thursday became one of my favorite bands, especially as I developed from a happy bookworm into an angsty creative writer. Rickly’s lyrics are dark and depressing, and they fit right in with my poetry emphasis. I have an incredibly embarrassing creative writing assignment based around the album War All The Time from my freshman year that no one will ever see. Oh yeah, did I mention my first tattoo was the Thursday dove? I’m one of those kids. It’s been really sad for me to see Thursday open up for bands like A Day To Remember and Taking Back Sunday over the last few years of their existence, because that band surpasses all of these headliners in both depth and length. Thursday’s discography begins in the late ’90s and isn’t a handful of catchy pop-punk fluff. Though they finished strong with No Devolución, the direction they were headed in was one their tourmates had no access to.

As Geoff quietly got on stage with an acoustic guitar, he looked like he hadn’t aged a day in the last ten years, with sandy brown hair in his eyes and that unmistakable gap-toothed grin. He introduced himself––necessary for all the tweens in the crowd––and joked that his friends had suggested he play more uplifting music, since he was opening for Yellowcard. Obviously, this cut down quite a bit on playing any Thursday songs, so we ended up hearing a great, shortened cover of The Flaming Lips’ "Yoshimi Battles The Pink Robots Pt. 1." Geoff’s high-pitched emo whine was always one of the more unique voices of the post-hardcore era, but I had never thought of him as a good vocalist, the way you describe the pipes of someone like Chelsea Wolfe or Freddie Mercury. Stripped down like this, though, and with over a decade of practice under his belt, Geoff’s voice was flawless, and I finally got to hear one of my favorite songs from War All The Time that I’d never thought I’d hear live: "This Song Brought To You By A Falling Bomb"––preceded by a joke about their break from Victory Records really being over Geoff’s penchant for commercial jingles. The highlight was his final song, a cover of Thursday’s "Turnpike Divide" from No Devolución that was about half the speed, but brought a whole new perspective to the track.

Of course, I headed to the lobby to say hello, buy a T-shirt and get my tattoo signed like a true #fangirl. Geoff was even his own merch guy. He’s giving away his super experimental, somewhat industrial sounding, lo-fi solo music online here.