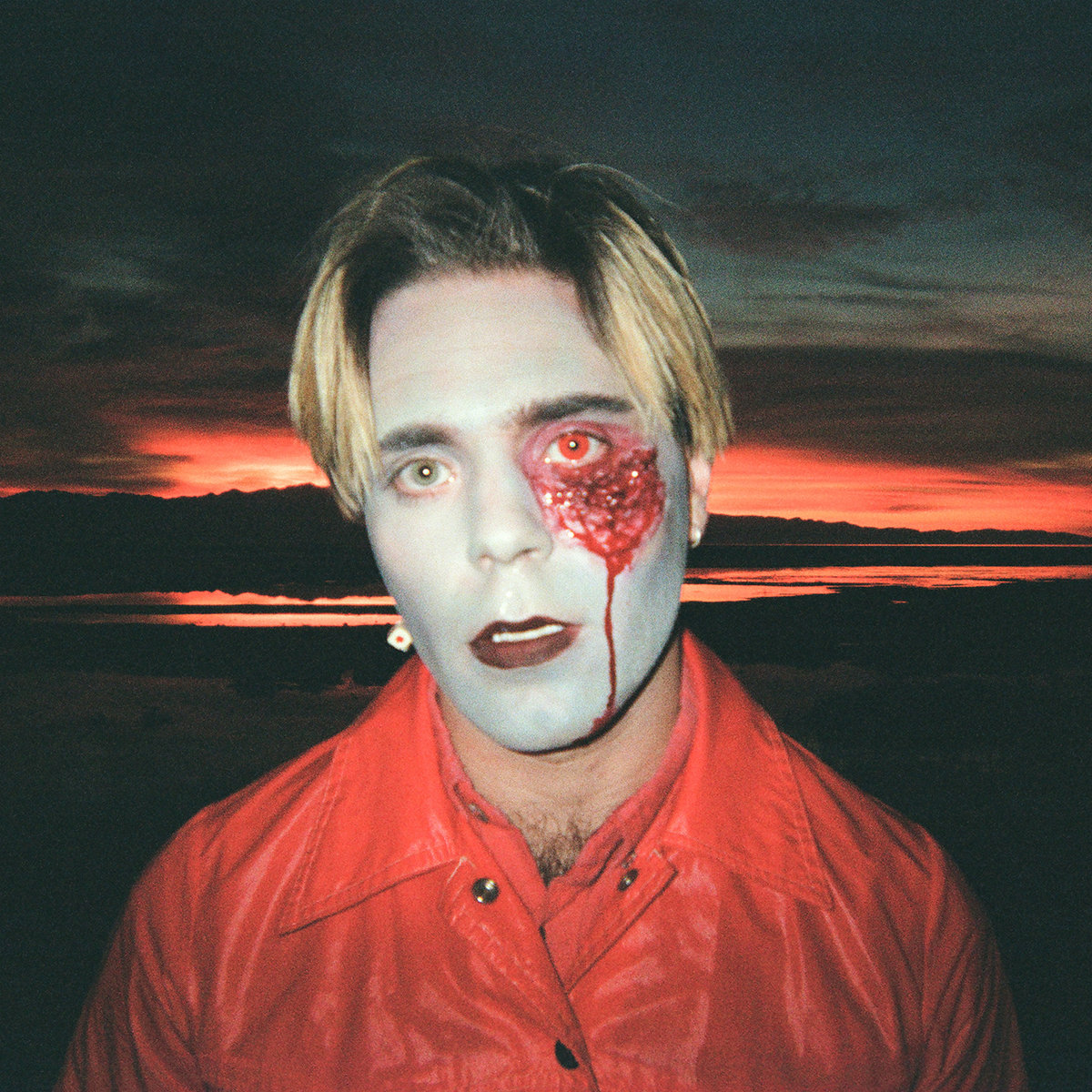 Choir Boy: Adam Klopp on the Vanity of Art and the Relevance of Gathering Swans

Listening to Choir Boy’s pained, dreamy synth-pop is like taking a guided ferry ride through your own subconscious. It’s melancholic and nostalgically new-wave, like a more contemporary, gothic version of The Smiths. The journey is gentle and unassuming, but once you take a closer look, you find your existential dread hiding in the corner (“Shatter”). You’re confronted with your aggressive introversion (“Leave Me Be”) and your incessant paranoia (“Toxic Eye”). And for the grand finale, you find a mirror that reflects you as the monster you’ve been hunting all along (“Hellmouth”)!

The impassioned mind behind these brooding songs, Choir Boy frontman (and Salt Lake City local) Adam Klopp is anything but subtle. I was pleasantly surprised at his openness and honesty as we chatted over the phone about Choir Boy’s second full-length album, Gathering Swans, a few days before it’s release on May 8. During the interview, I was sitting at my desk at home, staring out the window, and Klopp was taking a walk around his neighborhood near Kilby Court. At times I felt like a fly on the wall, as if I was merely dropping in on Klopp’s thoughts while he was out for a stroll on a sunny day. Klopp isn’t afraid to question the narcissism behind releasing music as a form of self-expression, and he’s asking himself the same question many of us are asking ourselves as our lives are turned upside-down: Does anything matter?

“Gathering Swans is about a broader existential wondering, but also, it analyzes the vanity of making music,” Klopp says about the new record. “Like, why do I care if people hear what I make? I’ve witnessed a lot of vanity within art, so I have to be self-critical and wonder, is that why I do this?” He says. The smokescreen of art extends past Klopp’s own vanity or promotion, however, and is most evident in the way his origin story has been portrayed by others. Klopp really did sing in a choir when he was a boy, for instance, but he believes some people take the mythology of that detail and blow it out of proportion. “I sang in a Mormon church choir and in my school choir when I was a kid,” Klopp says, “But people get this idea that I was singing in the Vatican as a little boy or something. It was definitely a more suburban version of that.”

When Klopp reached his teenage years and outgrew the church choir, he sang in a DIY punk band that covered classics like the Ramones, Dropkick Murphys and Generation X. Soonafter, he began playing “pretty songs” and solo acoustic shows. Around this time, someone Klopp knew called him “choir boy” as a jab, referring to his angelic voice. The reclamation of this insult would resurface as his band name years later. “I thought back on that as a funny thing, because I really did sing in choir. It was meant to be an insult, but it’s kind of true,” Klopp says. “But even the reference of me being ‘in the punk scene’ in a band bio is funny to me. I was in junior high and it’s hardly relevant to the music I’m making now. People always want an angle, so when someone writes about my description of it, it’s sensationalized.”

The sensationalism and frequency of outsiders attempting to narrate Klopp’s life has surely increased since Choir Boy signed with Dais Records in 2017, a development that Klopp is unflinchingly modest and grateful for. “We went from feeling like a Salt Lake band that would occasionally do a DIY tour to signing with Dais and working with a new manager and booking agent that we love and trust,” he says. “There’s a lot of factors and pitfalls bands can confront when acquiring the involvement of other people. Having experienced and trusted people in your corner to help you navigate that is really, really lucky … I don’t think we’d have half the audience we have today without Dais.”

As Klopp spoke, I visualized him as the zombie-like creature on the cover of Gathering Swans. In my mind we were walking the streets of downtown together, cars whizzing past as passersby stared openly at his mangled, bleeding eye socket. “Music videos are such a cool part of pop music, that there can be a character singing to you,” Klopp says of his spooky album themes. “On Gathering Swans, I tried to create characters like cartoon villains with mischievous personalities. It’s not a persona; Choir Boy isn’t meant to be a vampire or a zombie. It’s about creating characters as visual personifications of different themes in the songs.”

“It’s a metaphor for building a heaven-like world when you’re disgusted with what you’ve got.”

Themes on the new record include the arbitrary nature of life, grappling with cynicism and paranoia, overcoming internal criticisms and the self-absorption involved in the act of complaining. The last is ironic, considering Klopp’s answer when I asked him what it was like to release a record during quarantine: “It sucks. I don’t have anything good to say about it from a musician’s standpoint,” he divulged. “We wrote and recorded a record that we’re proud of, and we all put our lives on hold to focus on the band. It can put a strain on your home life and relationships, and we sacrificed a lot to go all-in and tour hard.”

As Klopp went on about this, I considered his own lyrics in “Complainer:” “But it’s not that bad / I’ve never really had it worse, oh no, no / I’m just a complainer.” Before I can say anything, though, and in his admittedly self-critical fashion, Klopp catches himself. “I don’t have any business complaining, though, because everybody’s shit got fucked up,” he says. “To feel like I’m personally wronged by the world is so self-absorbed because I have it pretty good…I’m not starving to death, I’m not dying of corona. That’s a big idea on the record: When there’s so much suffering, how can I feel like my complaints or issues really matter? How dare I even complain to you on this phone call about not being able to play my record live?”

In “Toxic Eye,” Klopp sings the standout lyric, “So tonight, I really should confide / Annie, I’m either prophetic or pathetic I just can’t decide.” Though Gathering Swans was in no way written to reference the impending worldwide pandemic, the prophetic timeliness of the record’s meaning is impossible to ignore. “The phrase ‘gathering swans’ references the idea of making or finding something beautiful after you feel disillusioned with the world,” Klopp says. “Say you have a paradigm shift after a faith crisis, or go through a divorce, or you’re growing old and are jaded or disgusted by the planet. It’s about embracing that paradigm shift and committing to happiness in order to move on. It’s a play on a Noah’s Ark parable, where everything is fucked up and you’re gathering swans for a new world. It’s a metaphor for building a heaven-like world when you’re disgusted with what you’ve got.” I can’t help but think that Choir Boy’s new record might be a “swan” Klopp’s fans can gather in the midst of their current turmoil, that though the release didn’t go as he planned, it might be even more meaningful for listeners as a beacon of hope in the current climate.

“I’ve witnessed a lot of vanity within art, so I have to be self-critical and wonder, is that why I do this?

During our interview, I have a browser window open, muted on my computer that’s playing a loop of Choir Boy music videos on YouTube. I scroll down to read the comments. One of them says simply, “Thank you for making the existence more bearable.” Another commenter divulges a depressive episode and writes, “I played this song on repeat to get me through.” To play devil’s advocate to the question Klopp has reiterated throughout our interview, “Does anything matter?” I mention the fans’ heartfelt comments. He’s silent for a moment as he takes it in. “I get so involved with writing the song that I forget the emotional impact it can have,” he finally says. “If people resonate with it and it’s a light in their life, I guess that’s the whole purpose.” –Mekenna Malan