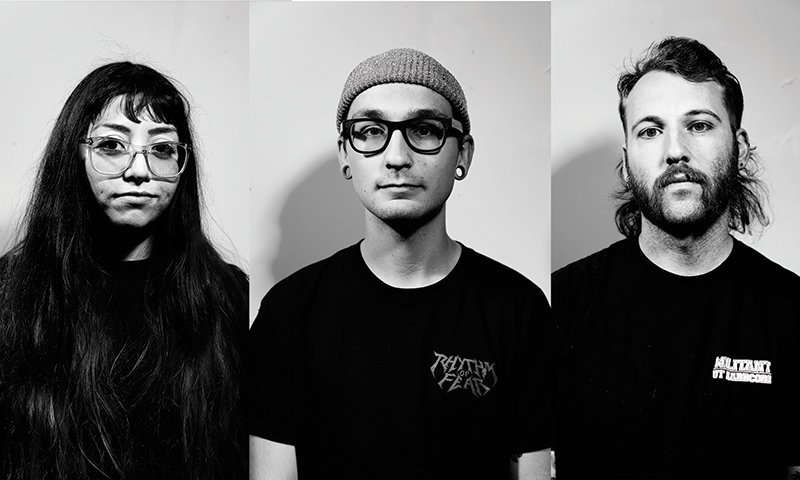 The summer solstice isn’t the only thing turning up the heat in the month of June. For this installment SLUG Localized, metal/hardcore crossover bands and a dose of intense, moody shoegaze are in the forecast, featuring performances from Liar’s Tongue, Absent and NVM. Get ready for a night of insane riffs and rowdy fun on June 20 at Urban Lounge for only $5. SLUG Localized is sponsored by Tito’s Handmade Vodka, High West Distillery, 90.9FM KRCL and Spilt Ink SLC.

After the mysterious appearance of their Instagram account to the release of their Spring 2019 demo, Absent have made themselves a highly anticipated act in the hardcore scene. While they have only been together since the beginning of the year, they’ve been quickly working toward recording music, playing shows and even booking a West Coast tour this summer.

Dea Giokas (vocals), Martin Theisen (bass) and Hunter Franks (guitar) came together on New Year’s Day, after discussing the project the weekend before. By the time the following weekend came around, it was decided that they would move forward with Absent. “I came home from work one day and Hunter told me that him and Dea were starting a band and they asked me if I would play bass,” Theisen says. For now, the trio are still on the hunt for a permanent drummer.

“We have no interest in playing the typical beatdown, metalcore shit.”

When it comes to their sound, Absent stray from the current metalcore trend and are focusing on a crossover approach. By extracting influences and inspirations from bands like Malice at the Palace, Creeping Death, Metallica and Suburban Scum, they create a thrashy, hardcore, death/black metal hybrid that creeps and haunts just as much as it pummels and annihilates. “I feel like our sound is like if Metallica listened to Suburban Scum and Mayhem,” Franks says.

The goal with Absent is changing the mold. Because each member has different musical tastes, the band comes together through these differences and thrives off of the variety of genres each member brings to the table. “We have no interest in playing the typical beatdown, metalcore shit,” Theisen says. While they may get pigeonholed as metalcore due to their thick, heavy metallic sound, the lack of panic chords and inclusion of blackened, thrashy riffs in their place make them stand out in Salt Lake City’s heavy music landscape. “Hardcore is fun to play when you introduce new things into it,” Giokas says. “If you’re playing what’s popular, it gets really boring, but there are really great crossover bands that have come through that have really made me want to follow their lead.”

“I don’t ever want [Absent] to be a band that’s just coasting by.”

Absent released their Spring 2019 demo quickly after their formation, with the intent of not only getting their music out there but to get the ball rolling on booking their tour this summer. “Before you reach out as a nobody band, you have to be able to have something for [those booking] to look at,” Giokas says. “We already have seven shows booked, not including the tour that’s already booked out.” Mostly, Absent are proving how serious they are by taking the initiative on their own progress. “I don’t want this to just be a hobby,” Hunter says. “I don’t ever want [Absent] to be a band that’s just coasting by.” There’s a lot of hard work that’s gone into the Spring 2019 demo, and Absent in general, which is paying off quickly, as they’re already gaining momentum. “We did absolutely no promotion for that [demo,] we just dropped it, and right now, has 646 streams on Spotify and 587 on Bandcamp,” Giokas says. “People as far as Japan, Australia and the Philippines have heard our demo, so it proves that it was worth it for us to get our shit together from the get-go.”

While they’re a brand-new band, Absent are quickly making a name for themselves in the hardcore community. Whether it be in the Salty City, or in the numerous other cities they plan on touring on the west coast this summer. There’s no denying that their presence demands attention, and that they’re quickly gaining a lot of it. Their Spring 2019 demo is available on Spotify and Bandcamp, and have shows lined up all throughout June. Don’t miss out on catching them at Localized, and be sure to catch their next move on Instagram: @absent_hc.