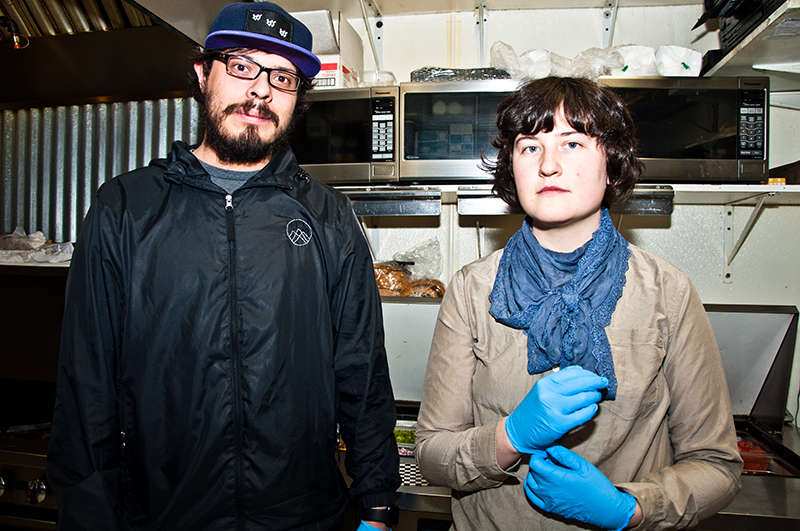 A project of Andrew Aguilera and Lauren Smith, Angel Magic began nearly four years ago when Aguilera was dating Smith’s then-roommate and making chiptune music. Smith’s band, Gils, asked Aguilera to add some drum machine work for a live show that they were doing. “That sparked interest in me working with Lauren more,” Aguilera says. The two then collaborated on a track for a project Aguilera was involved with called Weekly Beats 2012. “I only did seven weeks of it,” he says. “I could only survive that long, but for the first week, we did a track for it. That jumpstarted [the collaboration] 100 percent, and just worked from there.”

Earlier in 2015, Aguilera also released Soda, an album of effervescent, soft drink–sampling electronics, with his project Mooninite. “During Soda, I contacted [Smith] and asked [her] to do vocals on a Soda track,” Aguilera says. “Then [she] sent me an email saying, ‘By the way, if you’re ready to do Angel Magic, I’m ready.’ So I said, ‘OK, right when this is done, let’s get started.’ That’s when we went full force into it.”

Though both parties keep busy with other projects, they’ve managed to make time for Angel Magic recordings and live performances over the years. In preparation for Fall Through, Angel Magic’s first proper full-length album release, the duo released 2012–2015, a collection of their output from their first years of collaboration. “I am constantly writing,” Smith says, “not even necessarily to music, and if I had a thought for a concept or specific lyrics, I’ll write it down. Sometimes [Aguilera] will show me instrumentals, and I’ll feel like, ‘Oh, this is the one that this concept matches.’” Aguilera affirms that it was collaboratively casual. “‘Let’s just make a track today and post it on Soundcloud,’” he says, describing their process. “We didn’t have any plans or weren’t trying to talk about it as a [thing] yet.”

Though their process had been more casual until last year, Aguilera and Smith rolled the momentum of Soda and 2012–2015 right into Fall Through. “Once we had that collection of demos together and it was getting to the point where we were playing more shows,” Aguilera says, “we decided to curate all the demos that we had thrown on Soundcloud throughout the months and just put that out on Bandcamp, so that we could reach people a little bit more and they could could hear our sound and get familiar with it.” During the making of Fall Through, Aguilera was living in Salt Lake and Smith in Orem, and Aguilera would send his ideas via email or text. “I would make a track that I felt could be coherent enough to have a vocal track on it,” he says, “and would send [Smith] an audio text message and be like, ‘What do you think of this?’ Then she’d be into it and send me back something within hours, a sketch of something that blew my mind.’”

While Smith’s lyrics are influenced by artists such as Adrian Orange and Laura Veirs, it’s the repetition and strangeness of Italo disco that’s provided an aural topography for the duo’s world of beats, samples, keyboard harmonies and dream-inducing vocals. Many of Fall Through’s tracks feature beats or grooves that loop and repeat, as Smith’s smooth vocals and other magical patches and beats flutter in and out of the mix. “We try to be literal with the angel sounds,” Aguilera says. “We sample sprinkle sounds, fairy sounds, sparkles, David Blaine talking about magic—all sorts of stuff to make it pretty literal. Even if it’s not always audible, it’s at least present.” Their strict use of hardware such as drum machines, polyphonic synthesizers and digital delay pedals adds a magical touch to their recordings as well. “There’s a lot of accidents in the recording because of that, but I think it adds a lot of character,” Aguilera says. “It doesn’t feel plastic—it has that human mid-tone in it.”

Because Smith and Aguilera use hardware to record, their live performances have preformed movements but allow for some fun improvisation. “We try to make it a whole, self-contained thing,” Aguilera says. “We try to do an intro, so we have a sequence playing of a sparkly note, and then we have David Blaine talking about how his magic defies doctors’ recommendations, but he still does it. And then we jump into the track and go from there. We have everything sequenced. I have all of it on my machines—it’s just a big, giant mess that we’re both dealing with, and on top of that, [Smith’s] doing vocals.” Smith sings her parts live, though she’s trying to work out how to incorporate layers into her performance. “I do keep trying to think of ways to incorporate [more vocals],” she says. “I’ll play my harmonies on the keyboard, but I’d like to be able to include more.” Both agree that playing live has helped them tune in to each other. “We played a lot that year,” Aguilera says, speaking of 2015. “It helped us get to know each other’s movements.”

Fall through Angel Magic’s uniquely crafted world of beats at SLUG’s Localized on Feb. 18 at Urban Lounge. For more information on Fall Through and Angel Magic, visit helaudio.org.