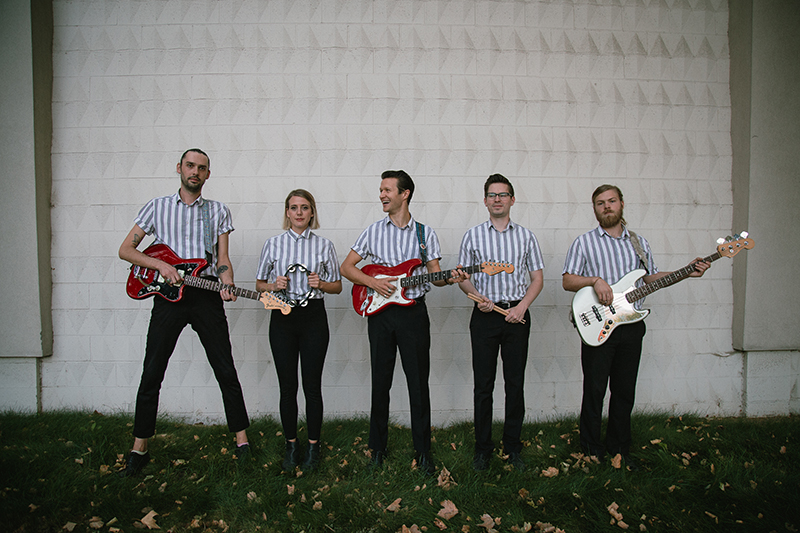 On Nov. 16, SLUG Magazine presents SLUG Localized featuring The Boys Ranch, The Poppees and Say Hey at Urban Lounge.  This evening will celebrate some of Utah’s finest surf, pop and rock n’ roll acts. Get ready to twist, shout and do the barracuda. SLUG Localized is sponsored by Uinta Brewing, High West Distillery, KRCL 90.9 FM and Spilt Ink SLC.

The Boys Ranch were founded by Denney Fuller and feature the talents of Wren Kennedy, Samantha Dickens, Conor Flynn and Ian Francis. Prior to forming the group, Fuller performed for years—including with Joshy Soul and The Cool—and  has always carried a deep affinity for rock n’ roll, most notably for songs such as Sam The Sham and The Pharaohs’ “Wooly Bully” and The Ventures’ “Wipe Out.” Feeling electrified by these tunes, Fuller says, “They make me wanna get wild and run around the house.”

As a group, The Boys Ranch share a wide range of influences. Everything from The Clash to bossa nova, from Prince to The Beatles whet their creative appetites. Fuller says, “I really dig early rock n’ roll as well. Del Shannon, Roy Orbison, Bo Diddley and Little Richard are just great.” However, the band that prominently stands out for The Boys Ranch are The Kinks.  “They are the blue-collar Beatles, in my opinion,” says Fuller. “They just have way too many dang good songs, and played exactly the way they wanted to play.”

Over the years, The Boys Ranch have supported countless acts.  Some of their favorite performances include playing with Bloodshot Bill, La Luz, The Buttertones and even Rockabilly Hall of Famer Hal (Holiday) Schneider.  Locally, they have regularly partnered with The Poppees, Martian Cult, Jacob T. Skeen, Slick Velveteens and the now departed Los Yayaz.

Aesthetically and musically, The Boys Ranch blend beat rock n’ roll with surf-driven power pop. “Aesthetic is a big one for The Boys Ranch,” says Fuller. “We want our shows to be an experience and not just ‘another show’ on any random night in town. We want to instantly bring the vibe that needs to be present during our live set.”

They do this by combining gritty garage-surf with 1960s mod-styled pop sensibilities. They unapologetically preach the gospel of rock n’ roll with guitar riffs, harmonious vocals and their own club night called Twist and Shout a Go-Go. “We started the Twist and Shout a Go-Go nights to shake things up a bit in the rock n’ roll scene,” says Fuller. “More importantly, the people coming to these nights are having real memorable experiences they can’t get anywhere else in town.”

Attendees find themselves in the midst of a show that stimulates the senses. Twist and Shout a Go-Go is a 1960s-themed night  headlined by live bands and  with sounds curated by an all-vinyl DJ. On top of this, live go-go dancers assist the bands by provoking and teaching the audience how to do “the Twist,” “the Watusi,” “the Mashed Potato,” “the Jerk” and The Boys Ranch original, “the Barracuda.”  Fuller says, “Anyone can do it, really. It’s easy. Plus, it makes our shows a lot more fun to attend and be a part of because the audience gets to be a part of the performance.”

To further shake up Utah’s rock n’ roll scene, The Boys Ranch are a part of the Scrappy Jamokes collective. The purpose of the group is to support creative outlets that are not just limited to music. Fuller says, “We are all ambassadors of the mini-movement we have been working towards, providing a unique roster of nostalgic and virtuosic talent in the SLC arts scene. The manifestation of this is providing entertainment for ‘Low-Lid Events’ and ‘High-Brow Affairs.’”

On top of Twist and Shout a Go-Go Nights, another example is The Boys Ranch performing Ira Flatow’s NPR Science Friday Show at Eccles Theatre on Sept. 15, 2018. Originally, the gig was slated for Joshy Soul and The Cool, but they were not available.  The Producer of Science Friday, Christopher Intagliata, checked out The Boys Ranch and felt that they were a unique fit. “We got to play the Eccles Theatre (they definitely don’t have local music shows there) to a 2,000-person crowd, got paid a good wage, got fed some amazing snacks, met Ira Flatow,” says Fuller. “He even posted a picture of us the day of the show, saying, ‘What a great-sounding band! The Boys Ranch play tonight at SciFri SLC.’” The following Friday, the broadcast was sent to every NPR affiliate station in the country to be heard by possibly millions of people nationwide.

Never resting, The Boys Ranch will, hopefully, have a new album coming out by the end of the year called GET REAL! This will include with a few music video collaborations with Mr. Bonetangles (@mrbonetangles) and Samuel Glenn Anderson (@s.g.anderson).  Thinking ahead, The Boys Ranch are considering some small weekend tours early next year and maybe even shooting to play some bigger festivals in the distant future. They will also be hosting their Twist & Shout a Go-Go events later this winter and next summer.  Until then, check them out at SLUG Magazine’s Localized on Nov. 16 at Urban Lounge.