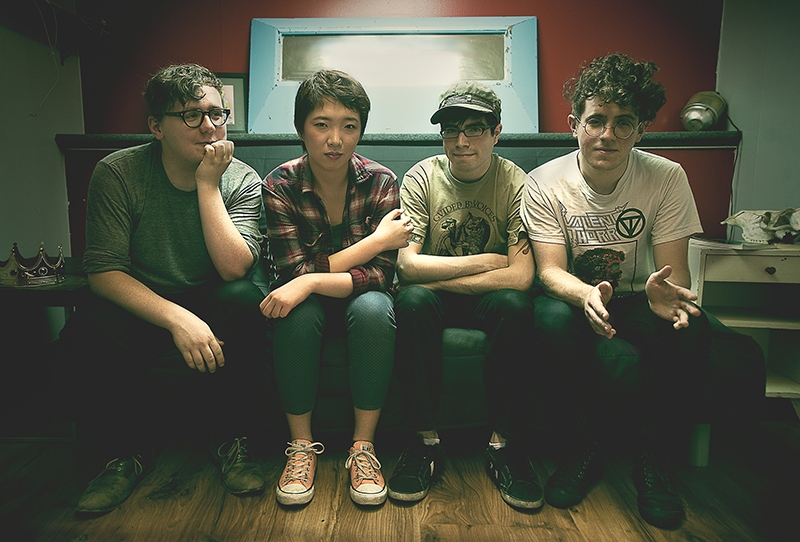 On July 11, emo noise-rockers Lydians will open a show at Urban Lounge featuring a few flavors of ‘90s alternative and punk. Rockers (and loafers) Chalk will be there, sharing some nod-worthy grooves before MoneyPenny (hopefully) gets naked and plays some punk songs. This show is 21+ and sponsored by the beer peddlers at New Belgium, the artists at Spilt Ink and the masters of radio at KRCL 90.9 FM.

I met Chalk at Nobrow Coffee where Skyler Bush (guitar, vocals) works. The group sat in a circle, nervously cracking quiet jokes before I flipped on the recorder and got started. Like many bands, their meeting seemed to be an instance of pure coincidence. As Luigi Ghersi (guitar, vocals) explains, “Originally, me and Jeremy [Devine (drums, vocals)] met at a party and found out we went to high school together. We learned that we liked metal, so we started getting together and jamming.” The two found a few other members, but the lineup switched a few times before solidifying with the additions of Sally Yoo (bass, vocals) and Bush. All said and done, the band has been kicking around for about two years.

As far as their sound is concerned, it’s tough to clearly define, and as Bush explains, it’s tough to pigeonhole any band these days. “2014 music is all derivative of everything at this point—I just don’t feel like there are genres anymore,” he says.

Bush also told me that the band has been called everything from indie to garage rock, though “slacker rock” was the term I saw them using online. “I know [our sound is] very referential to ‘90s indie rock,” he says, “which you could call the Generation X—‘slacker rock,’ so that’s kind of where I got the idea, but I don’t think calling ourselves a punk band or an indie band would mean anything. People have called us everything.”

The band’s sound, like its lineup, has gone through a number of changes as well. “When we started, the original lineup had a member who liked Britpop, sorta catchy stuff, but during that time, I wanted something more raw, more punk. We found a good middle ground, but it caused a lot of issues in the band back then,” Ghersi says.

Eventually, though, they built a group that worked well and could comfortably genre-hop from indie to garage rock or whatever, all while indulging each person’s ideas and letting each member sing the song he or she writes. As Bush says, “We all kind of bring different musical backgrounds into one, and I like it—it makes it interesting. It’s fun bringing the pieces together during songwriting—everybody thinks in a different way.” You can hear a variety of influences ranging from Weezer to Dinosaur Jr. to Superchunk. It’s a pastiche of ’90s goodness, marked by its laziness—and lazy isn’t necessarily a bad thing.

Chalk takes a relaxed approach to music. According to Devine, the band doesn’t focus on elaborate musicianship, but rather, they try to serve the song. “We wanted to do what’s right for the music and not necessarily worry about being technical,” he says, and it works perfectly. Their brand of music is taken from a time when laziness was a hallmark and slacker rock was something to be proud of. “I don’t know that anybody is as lazy [as us]. We’re kind of the champions of lazy,” says Bush.

Of course, lazy doesn’t always mean quiet. “Sometimes, during practice I’ll just stop and say, this isn’t even punk or this isn’t even indie anymore—it’s just loud,” says Bush. Chalk has a healthy dose of heaviness, owing to their affinity for metal (they even recently covered Judas Priest), but as Ghersi noted, it’s not quite “metal heavy.” They can be heavy, but it doesn’t get in the way of their laidback qualities. Chalk seems to prove that a band doesn’t always have to be raucous to be interesting and entertaining.

Their casual style has its appeal, and as Bush would tell you, exuberance isn’t all you need in a live show. He says, “Energy and presence isn’t everything, and I also don’t think being 100-percent accurate is most important—it’s not like Guitar Hero where you mess up notes and everybody boos.” Luigi also noted that some music just isn’t suitable for the mosh-minded individual. “We’re a very guitar-driven band, but we’re not expecting people to mosh to our songs,” he says. Ultimately, as Yoo puts it, their sound is “sufficiently weighty.”

More than anything, Chalk seems to be about taking it easy and going with what feels natural. As Bush explains, “Chalk is sort of a time-and-place type of band. Everything [when we’re] writing is a reaction to something happening right now. Maybe some people connect with it, maybe not. Maybe the ones that do are the slack-rockers.”

In order to connect with a few more of these slack-rockers, Chalk plans to record an album with Matt Mateus of Spy Hop and possibly tour—they’re hoping to acquire a space van to tour Mars—something they called “Martians Meet Slack Rock.” Bush also joked that they aren’t totally above selling out: “If Nike ever wants to do an ad with us for Air Jordans, that would be fine. It’d be like double ’90s revival. We can call them ‘Space Jammers,’” he says.