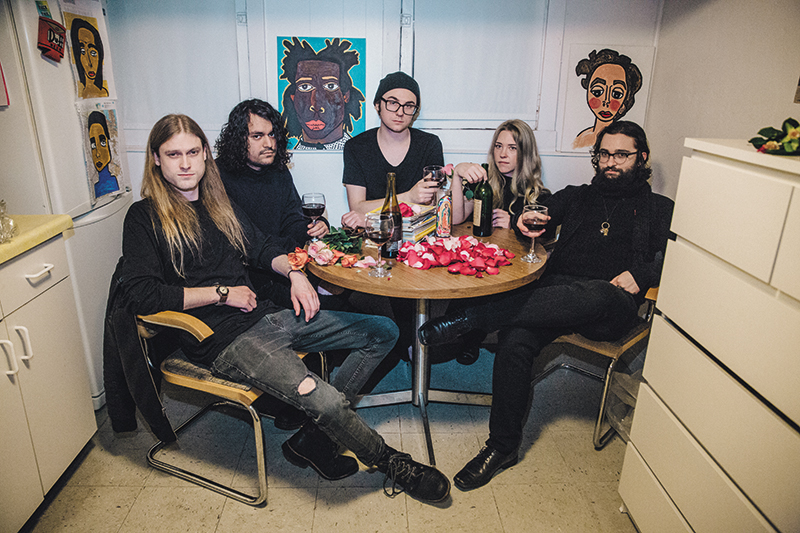 February is the month for lovers and longing. As the snow begins to melt and spring is around the corner, we look to explore Salt Lake’s shoegaze and dream pop outfits, bands whose textures and atmosphere mirror and accent the approaching season and farewell to winter. This month features the swirling, hazy sounds of openers Diotima, the dreamy, twee-esque tunes of Cupidcome and the crushing, visceral walls of sound of No Sun. Come join us at Urban Lounge on Feb. 15 for our own bloody valentine! As usual, SLUG Localized is a free, 21-plus show and is sponsored by Uinta Brewing, High West Distillery, KRCL 90.9FM and Spilt Ink SLC.

Cupidcome are a band unlike anything else in Utah, and as such are difficult to accurately describe to the uninitiated. The five-piece band blends psych-tinged textures and reverb-laden drum machines with profound yet lighthearted lyrics. In a single word, their music sounds instinctual, if nothing else. While the band’s name is a nod to one of shoegaze’s greats, it’s an homage only in name, as they delicately cover more ground than just the fuzzy textures and ambience normally found within the genre, a genre that more often than not repeats itself. Cupidcome skirt around cliché and instead craft their own sound, sometimes invoking the essence of ’90s British twee and dream pop.

I met up with the five members at Tinwell in downtown Salt Lake City, and over pints and hot toddies, they enthusiastically told me about their past together and affinity for one another, their influences, and the struggles they’ve had to overcome as a band to get to where they are.

According to guitarist Bailey Nelson, the band officially started out in March of 2015, with vocalist/guitarist Mario Zizumbo and baritone guitarist/bassist Micah Hill comprising the beginning lineup. “Well, it was before you guys, because technically, Mario and I have been in bands since middle school,” keyboardist/tambourinist Spencer Ditta chimes in. Vocalist/keyboardist/tambourinist Malory Ross steps in: “Well, Mario and I had our own electronic project in 2010, and we took a couple of our songs and the inspirations from that into Cupidcome.” At any rate, they have known each other for a very long time, and this past together and their comfort with one another bleeds through into their music. Ross and Ditta clarify that they settled on the current lineup in mid-2016.

“We developed our sound very early in our formation process, and that’s very important because a lot of bands spend too much time trying to find their sound,” says Hill, elaborating on the band’s history and their bond. “There was never any audition process for any member of the band. We always just said, ‘Hey, it’d be cool to have so-and-so play this part,’” says Nelson about how each member of Cupidcome fell into place.

Cupidcome recorded and released a few demos, eventually putting out the CD/tape EP Sweet Heart in January of 2016, before taking a brief hiatus in 2017 from playing shows to focus on recording. “We came out with our EP in 2016 and we had a very tumultuous year, and I want to say we almost broke up. I would say most bands would have broken up with most of the things we went through,” says Hill when asked if Cupidcome had anything in the works. Ross elaborates that they “totally overcame that, and it’s awesome,” she says.

Though short, Cupidcome’s Sweet Heart EP spans several emotions in just a few minutes. “We like to make emotional music,” says Hill of what the band works to convey through their music. “As long as you have an emotional backbone to your sound, then it will work. We idolize bands like The Field Mice and The Chameleons, bands that have this genuine emotion to them.”

The title track of the EP demonstrates these influences perfectly, the vocals carrying a sense of yearning and urgency, while the second track, “Elecktrick,” is what Nelson explains as a perfect example of how each member contributes to the overall theme. “Out Cool,” the third track, is a thoughtful and steady tune that wouldn’t be out of place on anything Sarah Records released in the early ’90s, a label that Ross cites as being highly influential.

The cohesion and friendship that the group shares is clear. Perhaps most impressive is how the band manages to illustrate this togetherness in their music, translating it into a fluidity within their songs while being a quintet without a drummer. Zizumbo controls all drum tracks from his cell phone, and each member adds their own parts to the backbone of the song, resulting in a fully realized track with intricate, complementary layers that never turn into a wash of sound. “We all trust each other,” Nelson says about how the group builds parts around songs that the group writes. “If anyone has an idea, we’re all ready to pitch in and make it work.”

Cupidcome plan to tour out-of-state one day, and aim to keep recording and releasing music. “One thing, to our credit, is that we have about an album-and-a-half worth of material to work with,” says Hill. “We’ve never lacked material. We’re in the perfect position to churn out a whole album,” which is good news, because as good as Sweet Heart was, its only downfall was that it was too short for a band as talented and as moving as Cupidcome. You can stream Cupidcome’s Sweet Heart EP and their earlier demos at cupidcome.bandcamp.com.