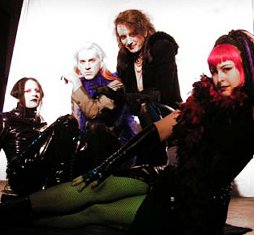 Localized this month falls on the auspicious day of Friday the 13th. SLUG has managed to tear the dark and macabre bands Tragic Black and Domiana away from the unspeakable activities they would otherwise be engaged in to play for us at the Urban Lounge, a private club for members only.

The same evening that we met with Tragic Black, we found all the members of Domiana at the same event. William was doing mixing for Tragic Black, so I spoke with Dementia and Dredd while they played. The both of them are also in The Gothic Rap Project, which they sort of downplay despite it being the best gothic hip-hop band that I have ever seen.

“Within the goth scene, S&M is very popular,” Dredd tells us. “I know the herb has certain magical properties as well and is used in certain forms of witchcraft.” The goths of SLC and anywhere else are constantly being required to prove their credibility. But Dredd says that he doesn’t feel like proving his credibility any longer. They don’t need the validation of the mainstream nor do they desire it. I have to respect anyone who is willing to go as far as they can into their own kitsch and still not acknowledge to anyone that it need be camp.

“I like to think that we’re pushing the definition of goth. In our music we have touches of psychobilly, a little bit of traditional ska and a lot of cabaret. We have the cabaret aspect of Weimar Berlin—a little bit of political satire, but still very theatrical and over the top. The whole performance is a satire of contemporary values. We very influenced by the decadent writers, like Oscar Wilde.”

Dredd does most of the talking, giving one the impression that Domiana is more his baby than anyone else’s. “We do have one song that’s very much a torch song. I’ve never felt very comfortable in society. You can either approach that as either starting a revolution or what we are doing, which is sort of separating yourself, reinventing yourself; it’s more of a personal revolution. I feel like Domiana is encouraging people to do that.” Even if you can’t make it out to see Domiana at Localized, at least take a look at their website. It’s incredible.