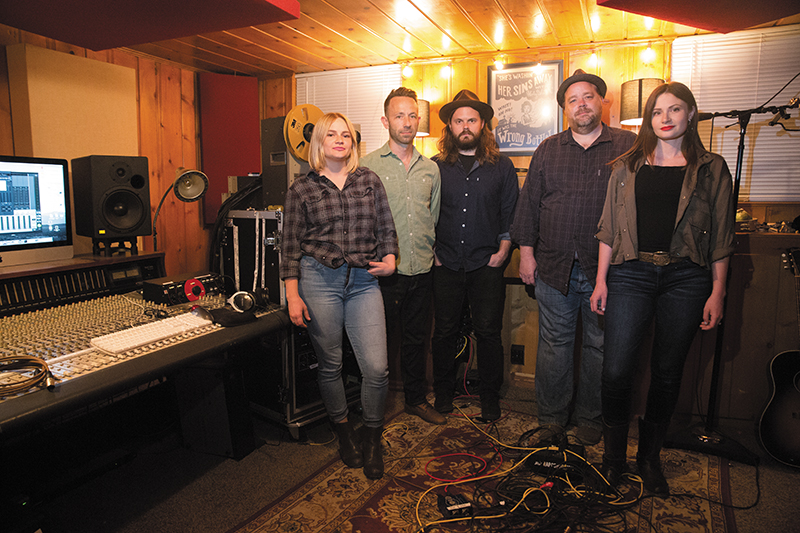 Temperatures are dropping, and the nights of whiskey-drinking, Americana folk music are upon us. For November’s SLUG Localized The Hollering Pines, Winter Grain and Mia Grace are teaming up to fuse the blues with rock n’ roll and country croons to satisfy local music lovers. Localized is generously sponsored by Uinta Brewing, High West Distillery, KRCL 90.9 FM and Spilt Ink SLC. Roll by the Urban Lounge on Nov. 16 for the always free, 21-plus show, and indulge in some of Salt Lake’s finest tunes.

For The Hollering Pines, their roots run deep and far, from Salt Lake to Provo Valley. As Utah natives, they emerged from high desert and mountain life into The Hollering Pines, forming in 2012.  Sisters Marie Bradshaw (vocals, acoustic guitar) and Kiki Jane Sieger (vocals, bass) grew up singing harmonies together, and along with Sieger’s husband, Daniel Young (vocals, drums), they merged their lifelong passion to create and connect with other artists. “Music has always been a huge part of my life and a way for me to connect to people and express my thoughts,” says Bradshaw.

Young’s musical career began as a 13 year-old who traded video games for a guitar and songwriting. He became a drummer courtesy of The Band and his brother’s drum kit. He’s never really looked back. But when The Hollering Pines formed, they needed another guitarist. As well-connected musicians in Provo, they shared mutual friends with Dylan Schorer, who later joined. “We went to a Rooftop Concert in Provo where The Lower Lights were playing,” says the band. “Dylan was playing electric guitar, lap and pedal steel in that band. It was exactly what we needed.”

Four pines became five when The Hollering Pines convinced Mark Horton Smith to transition from a guest mandolin player on their first album to a full-time mandolin and electric guitar player in their band. “The way Dylan and Mark listen and intertwine their riffs with one another has turned into a big part of our sound,” says The Hollering Pines. “Of course, the gals’ vocals will always be a main focus for our sound, but the guitar work that Dylan and Mark have been working up together has been magical.”

Since their fruition, The Hollering Pines have incorporated everything from country, rock n’ roll, blues and folk into their catch-all Americana, American roots–styled music. Their music constantly evolves and often draws from their pool of influences, from Secret Sisters to chief icons like Emmylou Harris, Lucinda Williams, John Hiatt, Buddy Miller, John Prine, Gillian Welch, Townes Van Zandt and Hank Williams. Says the band, “As a group, we’re really lucky to share a lot of similar influences and the common ground we’ve built our sound on.”

In 2013, they released Long Nights, Short Lives & Spilled Chances, which they recorded at June Audio in Provo. A demo EP to get shows quickly turned full-length in two and half days. “We have grown a lot since then,” says the band. “We are more dynamically aware and can read each other better without having to say much.” Now, four years later, The Hollering Pines have just released Mansion of Heartbreak in early September 2017. The writing process was a more collaborative project than the first album, capitalizing on Bradshaw and Smith’s talent as writers. Bradshaw can “paint a picture and keep you interested in the song, always anticipating the next line,” while Smith draws on his influence from the late, great Leonard Cohen. “Collaborating on songs is new territory for us,” says the band, “but [we] do think that it is something that we will do more of. It brings a new dynamic to the songwriting process.”

Mansion of Heartbreak consists of partially old songs with new arrangements, defined as “worried songs for worried times.” “There’s a lot of anxiety in the world right now, about pretty much everything. It’s not hard to write a ‘worried song’ these days,” says the band. The album was recorded live at Orchard Studio in North Salt Lake over three days in April. “We recorded live in the same room as often as we could, and did minimal overdubs after the main tracks were recorded,” says the band. “There is a lot of bleed in the microphones, which made it feel authentic and real.”

The band’s recording style points to their sincere adoration for playing live music. “Live shows connect us to people,” they say. “We love house shows and intimate venues with a real listening-room vibe. Our favorite show we’ve played recently was as part of the Salty Mouth Concert Series in Provo, and we’ve also really enjoyed the opportunities we’ve had to play at The State Room with so many of our musical influences.” When they’re not playing, they’re attending shows and indulging in musical relationships with other musicians.

Collaboration is a defining feature of The Hollering Pines—each band member plays in The Lower Lights and is involved in personal projects. “It feels like there are endless possibilities for collaboration in the musical community, whether it’s recording on albums with other musicians or performing tribute shows,” says the band. They continue to grow their roots and ride into new relationships, new opportunities and new music. “People will be hearing a lot more of us. We plan to make a lot more records and play all the shows we can. That’s the dream.”