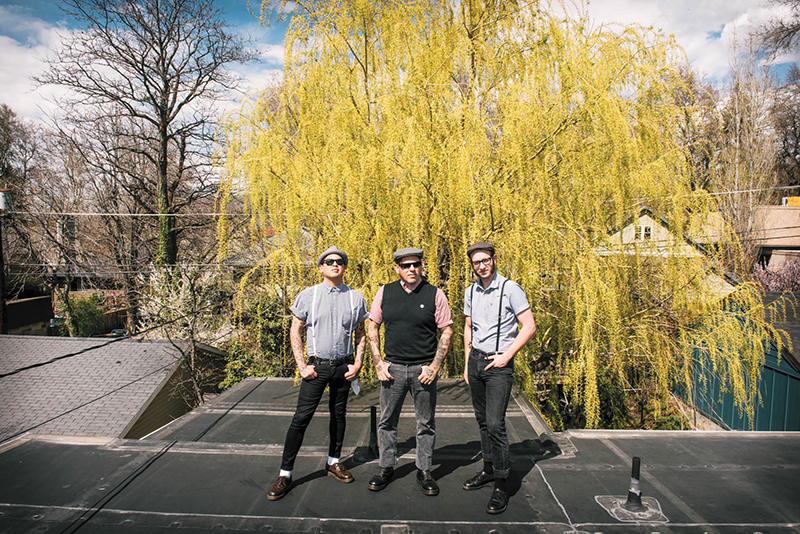 For May’s SLUG Localized showcase, concertgoers and troublemakers alike will be graced by three of Utah’s most notorious punk acts. Opening this night of mayhem and debauchery will be Revolt, with Ogden darlings Jail City Rockers and Salt Lake’s own The Nods headlining. This is a night not to be missed, so come out May 20 to Urban Lounge and dig this, sponsored by Uinta Brewing Co., KRCL 90.9 FM and Spilt Ink SLC.

The sincerity of Jail City Rockers stands out because they are approachable and always humble—traits one should expect from true punk rock n’ rollers. Jail City Rockers are the brothers Andrew and Gabe Bonilla, Aron Mikkelsen and the newly joined Gabey Spent, formerly of Duane Peters Gunfight. Jail City Rockers formed from the ashes of the Bonilla brothers’ prior band, Nobody’s Heroes, and for the last four years, they have tirelessly graced the Wasatch Front with their own design of roots-driven rebel rock. “I told Gabe when we started this band, ‘I have a huge London Calling poster on my wall,’ and I pointed at that and said, ‘Gabe, this is what I want to do,’” says Andrew. “I want to be a rock n’ roll band. I want to be a punk band. I want to have hints of old traditional ska music, early Motown, early soul—which is kind of what we grew up on. We wanted to take that and blend it all into one band.” Speaking further on the subject, Gabe adds, “We’re definitely not good enough to be a Motown band, so we do it our way.” Additional influences that have helped shape Jail City Rockers include a wide variety of musical genres such as 1980s hardcore, Blue Beat Jamaican rocksteady, ’50s rock n’ roll and, of course, 1970s punk. The result is true rock n’ roll with nods toward a Clash-inspired roots-rhythm rebel sound.

This love for the roots rebellion in music is especially visible in how Jail City Rockers present themselves. On and off the stage, the lads always dress to impress with an almost strict sense of style that incorporates a mashup of Jamaican rudeboy and a mod aesthetic. “I think it’s so important to have an image in rock n’ roll music,” says Andrew. “It’s how you present yourself. We felt, at the time, the most rebellious thing we could do is all dress up in suits. We dress really nice [and] always try to push people’s limits and thoughts—just not falling into a mold of a certain style or genre.” Gabe adds, “What influenced me was the hardcore movement and straight-edge movement. Some of the guys from New York were dressing really nice and wearing certain brands and playing really heavy music, but, ya know, looking really good.”

Apart from a sharp visual presence onstage, Jail City Rockers’ passion for performing is almost second to none. Each band member displays a dedication to being part of a solid act, and this is particularly true for Mikkelsen, who is a fairly new addition to the lineup. After losing their prior bassist before two important gigs—the Good Vibrations SLC benefit show for Artists For Local Agriculture in August 2015 and The Vibrators September 2015—the Bonilla brothers recruited longtime friend Mikkelsen to join the band. “At the very beginning, I was taking photos for them back when they had a different bass player,” says Mikkelsen. “The old bass player—I guess his heart wasn’t in it, and I stepped in.” With regard to Mikkelsen joining the band and taking up the bass, Andrew says, “He nailed it within two weeks of our show in August.” Ever since then, Jail City Rockers have never failed to knock out a superb set.

Another recent addition to Jail City Rockers is Gabey Spent, who took over as Jail City Rockers’ frontman in early April. Spent has participated in an impressive number of bands that have blazed a path through the punk world—most notably, The Hunns, Exploding Fuck Dolls and Spent Idols. Gabe witnessed Spent Idols in Southern California in the early ’90s, a period when fast melodic hardcore ruled the airwaves; however, he was forever changed by Spent Idols’ unique sound. “It changed my life forever,” says Gabe. “I couldn’t believe what I was seeing. They were a ’77-type band playing in ’93.” Gabe would forever be influenced from that show, and nearly 20 years later, would bump into Spent in Salt Lake City. Jail City Rockers were playing a show at The Underground with Spent’s then-band, Salt Lake Spitfires. “He caught our show,” says Andrew. “He said he loved what we were doing.” After exchanging numbers, the lads held a meeting and invited Spent to sing for Jail City Rockers—which he accepted. “It’s taking the band to a completely different level than it’s ever been on,” says Mikkelsen. “He’s going to be able to teach us a lot of things as far as how everything works, music business–wise.”

Now with a fortified lineup, Jail City Rockers are ready to hit the Urban Lounge stage on May 20 alongside The Nods and Revolt. The lads promise to deliver the goods and then some. “I always take it as, ‘This is my last show, man,” says Andrew. “I don’t want to end it on a bad note … We’ve always given it 100 percent. Come on out and get excited, because it is going to be killer.” For all things Jail City Rockers, check out facebook.com/JailCityRockers.