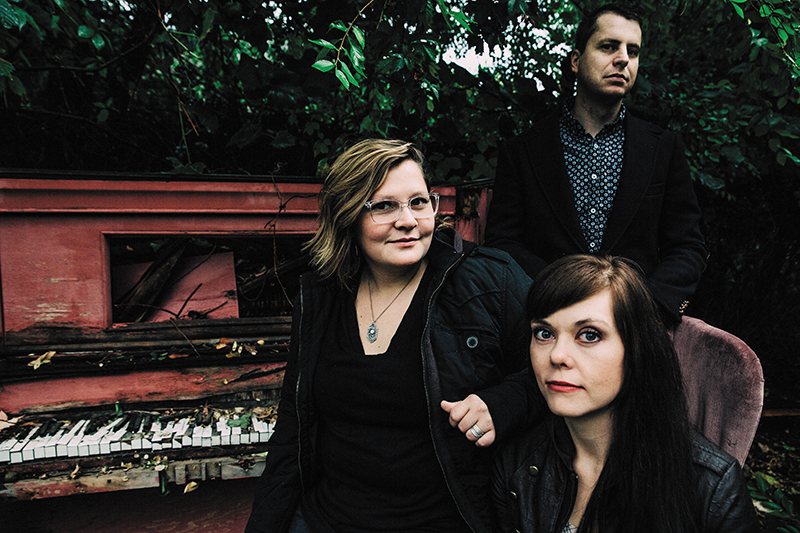 In the spring of 2012, solo artist Kayley Glauser (lead vocals/guitar) posted an ad on KSL in an effort to grow her one-person band into a bigger sound. Married duo Tiffani (keyboard/guitar/backup vocals) and Mike Barney (drums/guitar) joined Glauser to establish Johanna Johanna as a trio, though they aim to eventually add a bassist. In the meantime, Glauser’s coworker at the School of Rock, Erin Whitmore, will be the guest bassist for the November SLUG Localized showcase.

Glauser’s great-grandmother was named Johanna. “We have this photograph of her standing in front of [a] super old car,” at well over 80 years old, says Glauser, with “a big cloak on [and] a raccoon hat, holding a shotgun.” Johanna is described as a family-oriented woman who was progressive and simply “ahead of her time.” In their music, Johanna Johanna seek to honor and embody her resilience and timelessness.

Johanna Johanna are a “family band.” Family keeps these locals rooted in Utah, influencing their venue preferences and inspiring their lyrics. Tiffani teaches dance to children and Glauser teaches vocal lessons at the School of Rock, “so having all-age venues to be able to invite them [to],” says Glauser, is important for the opportunity to “include and introduce them to the Salt Lake [music] scene.” While all-age venues allow all the members’ families and friends to support them, it also allows the band to perform in front of diverse groups of people who are out “searching to find their new favorite band,” says Tiffani. “I was that kid at one point,” says Mike. “Kilby was my first venue. Everyone has a history with Kilby—there’s a lot of nostalgia there.”

Johanna Johanna have been impacted by the local music community in general. “It’s very supportive,” says Tiffani. “People actually go out to watch a night of music and discover new bands.” A fanbase is important, but “local musicians, especially, are supportive of other local musicians—bands we’ve played with in the past always like and share our stuff, and vice versa,” says Glauser, and Tiffani agrees. “I [don’t] feel like it’s a competition,” she says. “I feel like there’s plenty of stage time for everyone.”

Johanna Johanna embody their own Americana, folk-rock vibe. They draw inspiration from artists like Brandi Carlile, Patsy Cline and Rilo Kiley, Manchester Orchestra and Thrice are big guitar influences for Mike, who deems himself more of a composer than a lyricist. “I like to write riffs,” he says. “A lot of our music is based around a riff.” Each person writes their own parts, building up the riffs with other sounds and recurring questions of “What does the song need?” along with an understanding of how the instruments can simultaneously tell and fortify the story that the vocals tell. For Johanna Johanna, the lyrics serve as the emotional grounding for each song, and the instrumentals, from the guitar riffs to the piano, play off of that foundation. In essence, each instrumental shift is made tactfully, and there is a musical depth with which listeners can deeply connect, whether they are conscious of it or not.

Johanna Johanna put more emphasis on the vocals and lyrics, however. “My heart is so into big-band, old-school Frank Sinatra and Billie Holiday,” says Tiffani, “which isn’t this band, but maybe that does come through in our harmonies.” Glauser takes to writing emotionally fueled lyrics, which are “connection-based,” says Glauser. “It’s what we go for and the way we address music.” She pulls from experiences and feelings: “Music helps me get through emotional things, so if I can provide that for myself as an outlet or for somebody else to connect with, that’s my inspiration.”

Tiffani was drawn to Glauser not only because of her vocal talent, but also her lyrics: They’re “not overly literal,” Tiffani says. When she sings backup vocals, she “may feel a different way than Kayley [does], and that’s the beauty of music and art—that it will make you feel something. It will evoke emotion.”

The band’s self-titled, versatile full-length was released in January of 2015. Each track varies instrumentally from the last. “Sometimes we’ll write a rock song—it will be a little heavier, and we’ll go that direction, but then we’ll [realize that] we haven’t used the acoustic in a while and think, ‘We need to do that more,’” says Mike. While the album includes mostly new songs, a few are refined versions Glauser wrote as a solo singer/songwriter. The album was recorded at Counterpoint Studios with Terrance DH, which provided a steadfast and enriching experience that produced so gratifying an album.

Johanna Johanna are currently devoted to writing and blueprinting what their next album will entail—listen to their music and watch for new material at johannajohanna.bandcamp.com. For now, they’re bringing their focused stage presence to Localized. Johanna Johanna want to “rock out with you if you come to the show,” says Tiffani—they want to meet new people and make new friends, so, says Mike, “Come say hi to us!”