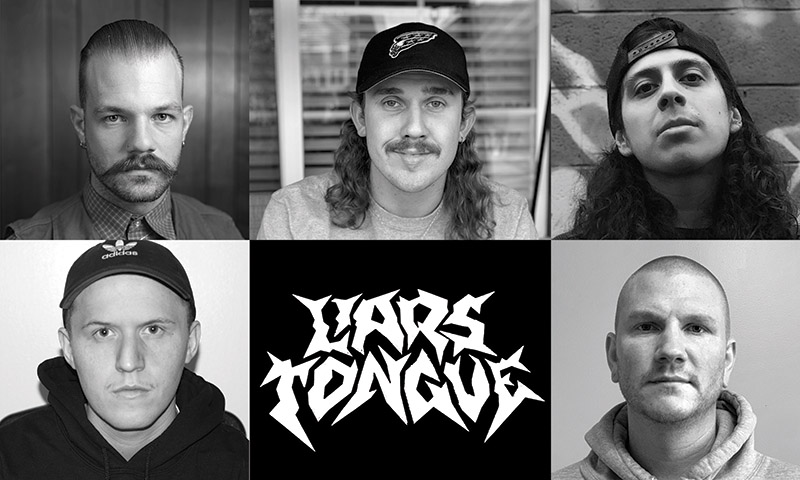 The summer solstice isn’t the only thing turning up the heat in the month of June. For this installment of SLUG Localized, metal/hardcore crossover bands and a dose of intense, moody shoegaze are in the forecast, featuring performances from Liar’s Tongue, Absent and NVM. Get ready for a night of insane riffs and rowdy fun on June 20 at Urban Lounge for only $5. SLUG Localized is sponsored by Tito’s Handmade Vodka, High West Distillery, 90.9FM KRCL and Spilt Ink SLC.

Liar’s Tongue have made a name for themselves—not only in the 801, but across the country, making them an SLCHC essential. Their reputation is impressive, and they’re constantly proving themselves, from releasing their first full-length album, Threat of Intellect,  in September of 2017, to playing big fests like For the Children in California. They’ve also had their name on big bills, as they’ve played shows with not only Knocked Loose, Downpresser and Mizery, but they’ve also toured Purgatory and Easy Money.

While Liar’s Tongue have seen different members and variations of their lineup since their formation in 2014, the current incarnation of the group stands tall with Mike Collins (vocals), Tyler Statler (guitar), Tyler Levie (bass), McCabe Johnson (drums) and the newest member, Richard Arias (guitar).  While Liar’s Tongue is a Utah-built band, their members span out to the West Coast, as Arias lives in Southern California and all throughout Northern and Southern Utah.  Liar’s Tongue met Arias when touring with his original project, Sacred Fire in 2017. After finding out that Sacred Fire broke up, they jumped at the opportunity to have Arias in the band. “At first, it was a serious [idea], but only if we could make it happen,” Statler says. “When I asked Richard [to play guitar for LT] he said he would love to.”

“People in Salt Lake don’t want to headbang for three minutes at a time—they want to beat ass.”

Salt Lake loves heavy music, which isn’t a mystery—especially when it comes to the local hardcore scene. However, instead of treading the beaten path of ’90s metalcore influences, Liar’s Tongue carve their own with a thrashier sound. “When we first started, we wanted to mix heavy with thrash to make a more crossover sound,” Statler says. “I think we really did that well, but now we’re leaning more towards riffy, groovy, thrashy, fast-paced, two-step shit.” While they admit they aren’t as heavy as they used to be, they still aren’t giving up on the mosh riffs.  “We’ll always have mosh riffs because not only do you have to have them, but because people in Salt Lake don’t want to headbang for three minutes at a time—they want to beat ass,” Statler says. While that may be the case, Liar’s Tongue have found a way to blend the two to make a listening experience unique to who they are. “I feel like a lot of bands here are super heavy, but we’re heavy in a different way,” Collins says. With Liar’s Tongue, there’s something for all heavy-music fans to enjoy, as they grow and diversify the local hardcore landscape with their developing sound.

Their influences range from (but are not limited to) Metallica, Cruel Hand and Power Trip, all of which show through in their music. “When I first got into hardcore, I started listening to Trapped Under Ice, Terror and Backtrack,” Collins says. “Then I started listening to Take Offense and Cruel Hand, and they were hardcore bands, but they weren’t all about breakdowns and shit. They had riffs and they were fast, and that’s what turned me on to all of that. For me, it’s riffs over break downs, that’s it.”

“For me, having fun is the most important thing and everything else comes after. You can be the biggest band in the world, but if you’re not having fun, it’s kind of pointless.”

While they may be miles apart and can’t have steady, weekly practices, they still find a solution to make the band happen. “The plan is that Richard and I are going to write riffs together,” Statler says. “I’ll send over my raw recordings, he’ll show me what he comes up with, and he’ll map out drums on his computer.” From there, they learn the songs individually, and when they finally come together, the pieces fall into place.

“All I’ve ever wanted to do is go on tour,” Collins says. “For me, having fun is the most important thing and everything else comes after. You can be the biggest band in the world, but if you’re not having fun, it’s kind of pointless.” Because Liar’s Tongue are fueled by their passion for music and their craft, a big goal of theirs is to take their music to the next level. “I want to do bigger things and have fun,” Statler says. “Some bands get a good following and then they just break up, and I don’t want to be that band.” Right now, their biggest goal is touring. More specifically, finding a way to tour places like Europe and Australia. “It used to be a big deal to play out of state,” Collins says. “But now, I want to go out of the country and play music.” While they want to tour internationally, they recognize the impact of their tours within the U.S. “When we were playing Florida and people knew our songs and sang along, that was fucking crazy,” Collins says.

When it comes to their plans for 2019, they’d like to release a two-song tape to show what they’re working on with the new line-up and continue writing for an EP, hopefully by the end of the year. While there’s talk about potentially touring this year, there’s nothing set in stone quite yet. Their album, Threat of Intellect, and their most recent track, “The Infernal Region” are available to stream and purchase on their Bandcamp.