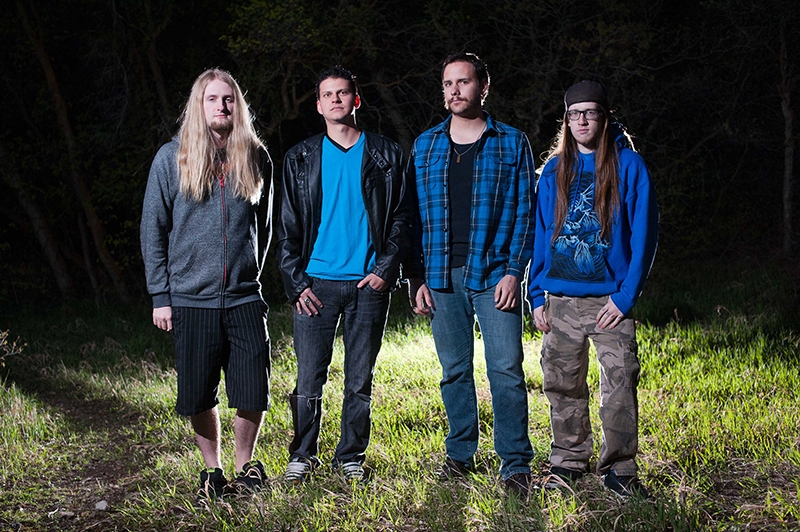 Sometimes, one must sit back and marvel at the variety of music—especially metal—that exists in SLC. SLUG is proud to tap two bands who represent different faces of metal: power-proggers Disforia and Western thrashers Dead Revelator. Come see them and Founders of Ruin at June’s Localized showcase at Urban Lounge on Friday the 13th for a measly $5! The show is 21+ and sponsored by Fat Tire, Spilt Ink and KRCL 90.9 FM.

Local power/progressive metal outfit Disforia seem to have predicted the future when they named their debut album Our Time Defined. Indeed, it does seem to be Disforia’s time. When last we spoke with them in 2012, the group was enjoying a successful reception of the aforementioned debut album and gearing up to embark on an ambitious Indiegogo campaign to fund the next one. Now, here we are, two years later—the campaign was a raging victory, and Disforia are on the edge of releasing what could well be the rocket fuel that pushes them onto the national stage—upcoming album The Age of Ether.

Of course, it hasn’t been all sunshine and unicorn farts for the group. They lost a bassist for some time and put vocalist John Yelland on double duty as the fill-in. Yelland says he is glad it is over. His vocal style— reminiscent of the soaring pipes of dudes like Geoff Tate and James LaBrie—is not an easy one to pull off, even without an instrument strapped around his chest. “Playing bass and singing at the same time, something suffered, and usually it was the bass,” says Yelland. They fixed that with the addition of new bassist Alex Facholas. They also hired Dayton Anderson, who answered the band’s prayers of a consistent second guitarist, alongside founding member and lead guitarist Chad Anderson.

This time around, having a full lineup for most of the writing process helped the group feel more comfortable and focused. They feel they were able to really hone in on the stylistic choices that make Disforia unique, as well as find variation in their songwriting techniques to avoid becoming too repetitive. What came out of the studio is a grand step up from their last album. The Age of Ether will be an elaborate sci-fi concept album, with two interweaving narratives that influence each other. While not everyone is big on concept albums or on dedicating that extra attention to parsing out the tale through the lyrics, Yelland is confident that listeners will still hear the completeness of the narrative. “The way we’ve written a lot of our songs is such that it really goes with the lyrical material, so everything seems completely story-based in the music. I think the listeners will definitely pick up on that,” says Yelland.
Keyboardist and composer Austin Bentley is responsible for bringing producer Dan Jones (also of Chelsea Grin) into the fold, with connections through his other band, The Machines of Man. “[Jones is] awesome. He’s very good at what he does. With our last album, I personally feel like the way it came out was not the way the majority of the band had envisioned. The way he engineers is far more up to the ‘metal’ standard, I would say. I feel like it’s such a better fit now,” says Bentley. The band agrees that Jones has brought a huge improvement to their sound, bringing the knowledge and an open personality of a scene veteran and musician to the studio. “There were a number of times I wanted to try something crazy or weird, and he’d be like, ‘Why not? Let’s do it,’” says Yelland. This openness was coupled with honest feedback if said craziness didn’t mesh well with the sound—which, the band agrees, pushed them to deliver the best performance they could. The result is a far tighter and more focused Disforia.
The new album also features additional instruments like the violin, and even a sampling of a full symphony—but the biggest excitements are, by far, the guest vocalists. Yelland befriended Brittney Slayes of Canada’s Unleash the Archers on Facebook, and, after conversing for some time, offered her a spot on a track called “Lunar Sunrise.” Then, through means he says are highly classified, Yelland took a risk on a contact in Blind Guardian’s camp with the hopes of snagging the attention of legendary vocalist Hansi Kürsch. His contact agreed to get Disforia’s samples to Kürsch, with no guarantee he’d reply. Yelland, who is learning German, also included a recording in Kürsch’s native language in hopes of making an impression. Two weeks later, he got a reply. “Lo and behold, I get an email that says he’s interested,” says Yelland. Unexpected illness delayed Kürsch’s tracking, so the band pushed back their album release date to ensure all the pieces were in place rather than rush it out to market and regret missing this huge opportunity.
Again proving that success is all about risks, Bentley took his own by appealing to one of his illustrator heroes—the prolific Dan Mumford—about working with the band on a new art direction and logo. It took some persistence on Bentley’s part—“I emailed him about once a month for a year,” says Bentley—but eventually, Mumford responded and agreed to the job. He worked with them not only on the cover art, but on a new logo and T-shirt design that was used as an Indiegogo perk. Mumford’s colorful, line-heavy, and organic sci-fi look has completely renovated the band’s image.
2014 is certainly gearing up to be the Year of Ether. Shortly after this interview, the band hit a road bump when founding member and drummer Casey Frederick resigned unexpectedly. But Disforia is nothing if not persistent, and they are pushing to remain on schedule with a temporary replacement. The Age of Ether album release show is slated for June, along with their set at SLUG’s Localized.