SLUG Mag Soundwaves
Episode #395 – Cotes
00:00 / 18:06
Spotify Stitcher
RSS Feed
Share
Link
Embed
This month’s Localized showcase is going to be a night of real hip hop. Linus Stubbs is an accomplished DJ and producer who lets his beats do the talking. Burnell Washburn is young, but his career is on the upswing and his ambition is undeniable. Opener YZE is a top-shelf emcee/producer who puts on a show you won’t want to miss. Catch them all at the Urban Lounge (21+) on May 11 at 10 p.m. As always, $5 gets you in. 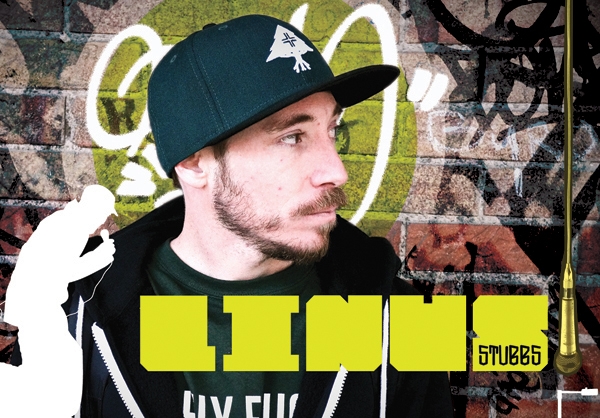 This month’s Localized showcase is going to be a night of real hip hop. Linus Stubbs is an accomplished DJ and producer who lets his beats do the talking. Burnell Washburn is young, but his career is on the upswing and his ambition is undeniable. Opener YZE is a top-shelf emcee/producer who puts on a show you won’t want to miss. Catch them all at the Urban Lounge (21+) on May 11 at 10 p.m. As always, $5 gets you in.

As a ’90s child from Ogden, Lance Palmer, aka Linus Stubbs, comes from an old yet still widely used school of thought in his style of hip hop production: sampling. Stubbs started making his “boom bap”-style beats the way many DJs-to-be get their start: by making music with a few friends. “About 11 years ago, my friend Josh Wangrud (DJ Mynd) started DJing and I got the same setup with an MPD 16 so I could stab out samples and drums. My friend, DJ Big Stefan, used to DJ here back in the day and he got us started,” says Stubbs. He would routinely dig through old jazz and funk records at the Salvation Army or Randy’s Records to sample and craft into a beat style similar to the East Coast style of greats like DJ Premier and Pete Rock. He began releasing his beats via instrumental solo albums under his newfound pseudonym, Linus Stubbs, as well as playing shows around Ogden and Salt Lake with fellow DJs Mynd and Big Stefan. “We would just play our beats live for basically five people in little dive bars. It was pretty fun, just to be able to play my music for people,” says Stubbs.

Local emcees soon began to take notice of Stubbs’ well crafted beats, which he explains is how he first struck up a relationship with emcee Task Rok, with whom Stubbs has collaborated on two full-length albums. “I went to a show at Monk’s House of Jazz about six years ago, and at the end, they had an open-mic freestyle session. Task Rok went up and I had heard good things about him, so after he was done, I went and met him,” says Stubbs. “He told me he’d already heard so much of my music and really dug my beats, so we exchanged info there.” Stubbs recalls driving from Ogden to Task Rok’s house in Draper a week later to show him some beats and to get the ball rolling on some music. Stubbs says, “I gave him a couple beats, and an hour and a half later, when I got home, I had an email from Task with a song completely finished. I was blown away that he had recorded something that quick.” Stubbs had found a good fit in Task Rok for getting an emcee on his beats, which soon led to him to producing beats with more locals like The Numbs and Wildelux, as well as other DJs and emcees from places as diverse as Los Angeles, Germany and Scotland.

Today, Stubbs’ choice of sample material is much more obscure than when he started. “A lot of kids use soul records still. I try to use samples that you’re not going to hear five different producers use, like weird Latin records. I’ll even go by the cover of the record—if it’s super weird-looking. I’ll think, ‘Yeah, that might have something weird on there that I can use.’” The search for the obscure has led Stubbs to produce some really original beats, like the track “All That Counts” off of The Movement, in which he samples the introduction to “Pick a Pocket or Two,” a song out of the classic musical, Oliver!

Of the more than 12 albums worth of music that Stubbs has released, one of his personal favorite projects has been the Scrambled Crates remix series, run by Jillzworth from her hip hop blog, Them Fighting Words. “She would send a song to a bunch of different producers and we’d flip the song how we would normally flip it. I really like doing that project because you’re forced to use a song even if you don’t like it,” says Stubbs. “Some of my better beats are from that, and it was cool because they were songs I would’ve never heard or never picked out.”

Stubbs’ latest project is a new album with Dumb Luck, entitled Social Introduction, which was released on May 1. Even with all of this going on, Stubbs shows no signs of slowing down anytime soon. “Task and I opened up for Action Bronson recently, and so many people in the crowd knew the words,” says Stubbs. “For me to cut the song out and hear everybody singing the chorus is just wild. To see everybody getting involved like that, it’s a really weird feeling.” Linus Stubbs seems to be on the upswing, and if his new music is anywhere as good as his old, he’ll be one of the DJs to watch out for this year.