Come out to Urban Lounge on Saturday, Aug. 18 to catch the multi-faceted rock n’ roll of Daisy & The Moonshines and the upbeat folk punk of Folk Hogan. L’Anarchiste will kick off the $5 show at 10 p.m. for all you 21-plus music lovers. 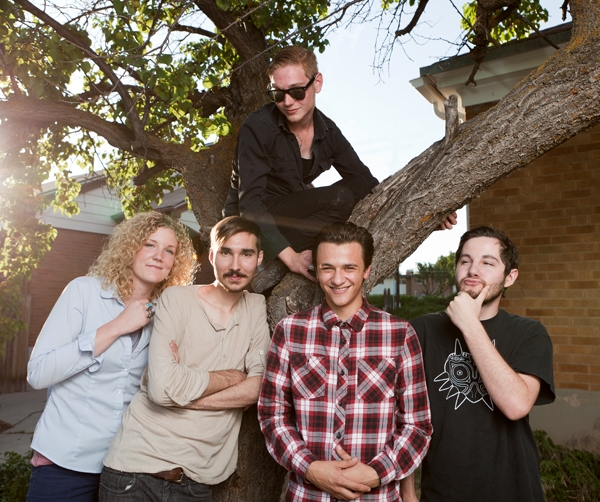 Come out to Urban Lounge on Saturday, Aug. 18 to catch the multi-faceted rock n’ roll of Daisy & The Moonshines and the upbeat folk punk of Folk Hogan. L’Anarchiste will kick off the $5 show at 10 p.m. for all you 21-plus music lovers.

Daisy & The Moonshines are a five-piece rock group consisting of vocalist Jacob Hall, guitarists Jared Asplund and Shea Ledesma, bassist Beverly Smith and drummer Thomas Fowler. The band’s sound stems from their diverse musical preferences—jazz, folk, glam rock, punk—and each member’s ability to blend their particular styles into a melting pot of grooving rock music. They’ve built a steady fanbase over the past year since the group’s beginning, which the band attributes to the caliber of their live performances. Their brand of rock is meat and potatoes, which is never really complete without a few hefty swigs of whiskey straight from the bottle.

Just like the dark themes found in the blues of Tom Waits, Daisy & The Moonshines’ rock comes with more than a few demons. “I’ve always been obsessed with the book The Great Gatsby,” says Hall. “The character Daisy is the manipulative character. She’s the hidden evil in the story who is also very beautiful. I really like the idea of that.” It’s in that limbo of evil and beauty that the band finds their inspiration for songwriting. They’re able to draw from a wide variety of sounds during that songwriting process due to the varied musical backgrounds of each band member—bassist Smith is a classically trained jazz musician, Hall finds inspiration in the straightforward lyrical style of Bob Dylan and the chaotic poise of Jack White and Ledesma was turned onto the guitar by AFI’s The Art of Drowning. The emerging sound is unpolished, groove-based rock with musical chops to spare. “I think, overall, we’re pretty versatile with genres, but it still has our feel to it, our vibe. No matter what, it still sounds like Moonshine rock,” says Smith.

The band has been in the studio for two EPs to date, but it’s the live set where they thrive. “Live shows are so much fun—it’s the biggest aspect of this band,” says Hall. Even in the studio, the band puts a live touch on their sound. The band recorded their first EP, the Daisy EP, in its entirety in a 14-hour live session at Archive Recording. “I really like Jack White’s idea of going into the studio and doing it all in one day, not knowing what the fuck is going on. It really does push that creative element into you. The harder you make it for yourself, the more interesting,” says Hall. The recording is well mixed and mastered, but it does put the live element in the foreground, making it more of a live album than a record. “It was a pretty drunk experience. The idea was that we wanted people to hear exactly what they were going to hear when they came to see us play,” says Smith.

Their next EP, the Moonshine EP, is scheduled to be released on the night of their Localized performance. This EP will be a true studio record and finds the band using multi-tracking instead of playing it all live. “It gives us more room to fuck with shit and make it more layered than the Daisy EP,” says Fowler. Hall says that one demon he was able to triumph over with the new EP is his struggle with imagery, which he claims is one of the facets of the Moonshine EP that he is most proud of. “I’ve always found fascination with words,” says Hall. “My big goal was to portray stories, which is a feat that I didn’t think I could accomplish.”

Daisy & The Moonshines are hungry and currently on a steady diet of local shows, which are receiving increased attendance. The band is on the rise, and with just over a year of playing together, their live set is only getting stronger. “It’s crazy to see the diversity of people that come out to our shows,” says Smith. That diversity, she says, becomes more varied with each show. They haven’t toured, but are eager as ever to get out there and play for audiences other than their hometown. With the rate that they’re picking up fans on a local level, it will be interesting to see what the band can accomplish outside of the state.