SLUG Mag Soundwaves
Episode #404 – Endless Struggle
00:00 / 14:25
Spotify Stitcher
RSS Feed
Share
Link
Embed
SLUG has a lineup of gypsy swingers Hot Club of Zion, the hard bopping Ambassadors and the avant-jazz of openers Exponential Rabbit, who will make their music live and breathe right in front of you at the Urban Lounge, Saturday, May 11, for $5, 21+. Those of you who are underage, banished to the outskirts of the city or stuck at home can catch the music streaming live starting at 9:45 p.m. on GigViz.com! 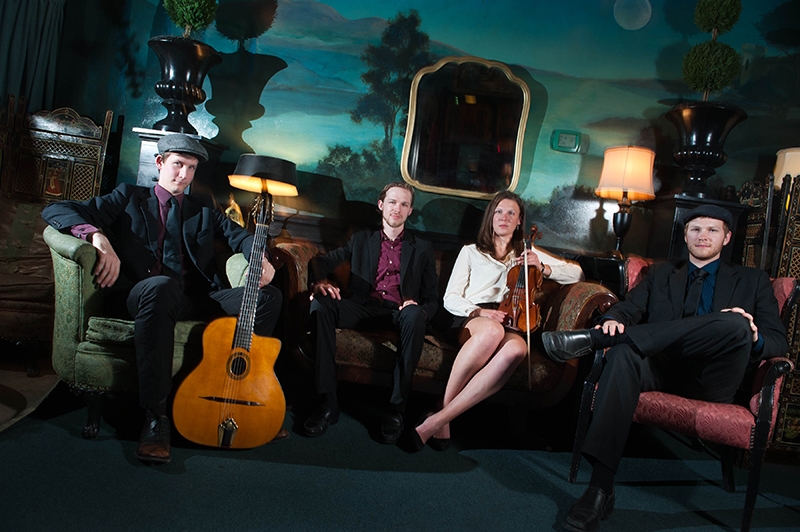 SLUG has a lineup of gypsy swingers Hot Club of Zion, the hard bopping Ambassadors and the avant-jazz of openers Exponential Rabbit, who will make their music live and breathe right in front of you at the Urban Lounge, Saturday, May 11, for $5, 21+. Those of you who are underage, banished to the outskirts of the city or stuck at home can catch the music streaming live starting at 9:45 p.m. on GigViz.com!

Gypsy jazz quartet The Hot Club of Zion play tunes that, of course, are reminiscent of Django Reinhardt and other luminaries from the birth of the genre in the ’30s. For those not in the know, gypsy jazz stems from the swing jazz of the era, imbued with a Roma-European guitar twang—think the instrumentals of Gogol Bordello meets the musical scores for Tom and Jerry. Part of what The Hot Club of Zion does, though, is bring this music to life today by putting their own mark on it. Three fourths of the band are music majors in the U of U Jazz Performance program, and because of their mutual interest in creating a group in which to enjoy themselves just as much as to appease their professors, The Hot Club of Zion was born.

“We started two years ago as an assignment,” says lead guitarist Nathan Royal. “Everyone except Liz [Conway, violin] is a jazz performance major, and instead of being randomly placed in a combo, we wanted to start our own.” Having seen gypsy jazz guitarist Frank Vignola play is what sparked the gypsy flame for Royal. He knew that rhythm guitarist James Martak liked the subgenre, and upright bassist Kevin Schultz and Royal had already played in a combo the previous year. After talking to another fiddle player, who ended up falling through, Royal got in touch with Conway with whom he had played bluegrass, “and even though she wasn’t a music major, she fit right in,” says Royal.

Looking to get more out of this combo than college credit, even at the beginnings of the band, they were already thinking of the possibilities. “We have to take four semesters of this jazz combo class,” says Schultz, “and it’s one of those things that we can have fun with, and [we] make it work for us instead of having to work for it. We did think, in the beginning, that we could play weddings and make some money. We had those plans, but we were having so much fun just playing, those things just happened on their own.”

Even though they thought of this as more than just homework, The Hot Club of Zion thrived with the structure of the Jazz Performance Department due to “just the fact that we had to,” says Martak. “It’s part of the requirements of the class, so we had a professor that would come to our practices and give us advice, and we had performances we had to do for school as the combo, and that made us build up repertoire.” The Hot Club of Zion eventually started playing at Big Ed’s across the street from the University, which tightened up the quartet’s set, as they were performing together for three hours a week. Soon enough, they released their debut self-titled album last August.

As gypsy jazz has grown in popularity in recent years due to its inclusion in films like Chocolat and Midnight in Paris, it’s a genre that most have heard, but not a lot of people know about. “It has a rhythmic vitality to it—it swings like a hammer,” Royal says. “It’s fun and exciting music that has a nostalgia to it. Most people may not recognize it, but when we play ‘Minor Swing,’ people know it because it was in a movie.”

Additionally, this form of jazz music fullfills both needs of challenging musicians and engaging the listener equally. “Gypsy jazz is an interesting intersection of [a] really technically difficult, creative art form and something super accessible,” says Conway. “As with rock or folk music, people will immediately connect with people [playing gypsy jazz], and a lot of times, there is some stuff going that not everybody gets, but there’s not always the need to think through very carefully as you would with most jazz music.”

Salt Lake has always had a thriving roots music scene, but something as uncommon as a gypsy jazz combo might cause one to think that The Hot Club of Zion would have trouble finding an audience. On the contrary: “I think there are a lot of scenes that we’ve been able to tap into,” says Schultz. “Even though they may not be into gypsy jazz specifically, it may just be they want to chill out in a café with a live band, or they may be into acoustic music or into vintage music, but I think, in the respect that there’s always people out there looking for something different, there was always an audience for us.”

Beyond their jazz performance majors, the band has aspirations to continue on in their music careers. Royal says, “We can go out and busk on the street five days a week and drum up gigs and make tons of great connections. Obviously, another record would be great, especially since the band has improved so much since we recorded our last one.” Since their formation, one of The Hot Club of Zion’s goals has been to travel to Europe and to “play and hang with the masters and play in the places that originated this music,” says Royal. Before they embark on a transcontinental adventure, you can catch The Hot Club of Zion every third Thursday of the month, drumming up the swing jazz mood at The Beehive Tea Room. Check them out at thehotclubofzion.com.