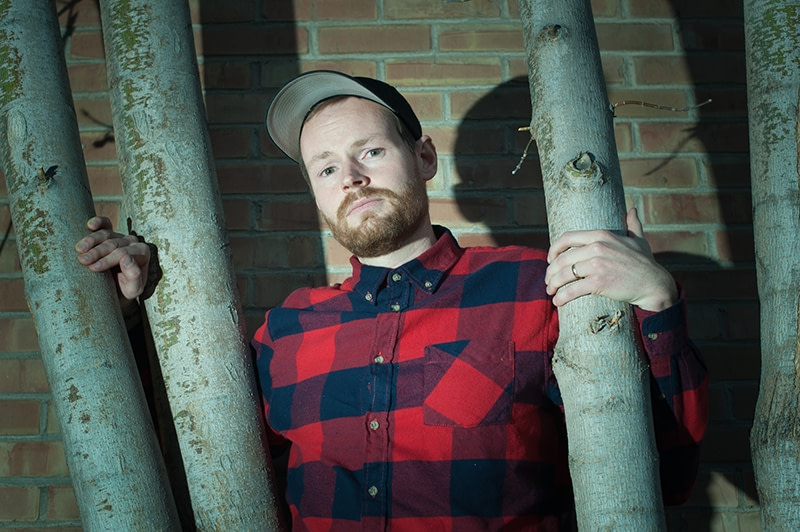 Localized will be Myers’ first performance as Famous Relatives, but he’s an old vet when it comes to performing live.
Photo: Russel Daniels

Utah is home to a sea of great talent in just about any electronic subgenre. This month’s Localized show on May 10 will provide a wide and refreshing variety of electronic music. Starting at 9 p.m. for just $5, the show at Urban Lounge will feature a few aesthetically pleasing electronic acts.

Ischa B. will emcee the show, which starts with the haunting, space-like sounds of Mkaio before heading into the relaxed yet energetic live instrumental set provided by Famous Relatives with a backing band. The night will end with the glitchy, homemade 8-bit sounds of Conquer Monster, Salt Lake’s favorite chiptune group. The show is 21+ and sponsored by Budweiser, Spilt Ink and KRCL 90.9 FM.

Tim Myers didn’t just pick up a production software program and start working; he began his music career playing with veteran local band Palace of Buddies—a two-man project he plays with good friend Nicholas Foster—before he branched off to work on solo projects. “I’ve been recording and producing for almost 10 years.

A lot of the Palace of Buddies albums have been co-produced and recorded by Nick and me,” says Myers, explaining the natural path that led him to start producing electronic music.

Palace of Buddies, a lo-fi, experimental rock group, has released multiple albums over the last five years through Kilby Records. Their upbeat and highly energetic sound, juxtaposed with the down-tempo, almost haunting sounds of Myers’ solo work, demonstrates variety in his musical taste and an interest in experimentation.

“Nick has some different projects, and I’ve always had different projects on my own, even if it’s just something I’m working on at home,” Myers says of the dynamic between the two of them, assuring Palace of Buddies fans that the group is still very much intact.

In 2013, Myers released his first solo album, Electric Signals, which is a smooth, lo-fi synthpop album under the name Famous Relatives ­—a name he says he heard and liked the sound of on a whim. “I hate band names—I’ve never been good at coming up with them,” he says.

Myers produced and recorded Electric Signals all on his own. “I like to be involved in every aspect, even mastering. It’s your own piece of art, and I feel like if I hand that off to someone else, it’s no longer mine—it’s almost like someone else influenced it,” he says. “I’ve used a couple of different softwares, but mainly , I’ve been using ProTools.”

For the live show, however, Myers plans on setting up various instruments and having a live band help him perform onstage. “I do all of the vocals, but I’ll have a live band [at Localized],” he says. “The live band will consist of myself on guitar and keys, Nick Foster on drums, Scott Whitaker on bass, Stephen Chai on keys and Nate Housley on guitar/keys.”

When asked where he thinks he stands in the local electronic scene, Myers explains that he doesn’t feel as much a part of it as he does others. “I feel like sort of an outsider—I think the stuff that I do is a bit different from what some of the other locals are doing, ” he says. Myers says he’s happy with any audience that will enjoy his music, but has no specific hopes for the type of crowd he will attract. Myers has a long list of local artists he recommends, having collaborated with many of them.

“There are quite a few musicians whom I admire here who do electronic stuff. I’m obviously a big fan of my bandmate in Palace of Buddies, Nick. He always writes amazing music; Jason Rabb, the Whitaker brothers, Logan [Hone] from Bright Whistles, Stephen Chai, Will Sartain, Scott Selfridge, Ryan Fedor, Andrew Glassett. [There are] so many great musicians in Utah, I’m sure that I have forgotten a few,” he says.

In addition to his band and solo projects, Myers also produces soundtracks for film. “I’ve done a couple short films, one called True Love by David Christenson and a full-length film called Ryan Baxter: Reenactor. I wrote the theme music for KCPW’s news hour and a handful of Internet commercials for the U of U, SLCC Film Festival, Ski Utah and others,” he says.

Myers is also currently working on another album under the name Famous Relatives. “I’m a little over halfway through my next solo album. The last album was slower and a bit more ambient, but the new one will be a little faster and a bit dancey-er. I’ll be playing a few of the new tracks at the show,” says Myers. He also has some good news for Palace of Buddies fans: “Palace of Buddies is working on a new album. We are really close to finishing writing the material. I don’t know the timing [of the release], but we will likely start recording in the summer/fall,” he says.

Localized will be Myers’ first performance as Famous Relatives, but he’s an old vet when it comes to performing live, as are his bandmates. As far as touring goes, Myers has no plans to perform in other places as of now, but hopes to in the future. Until the show, his solo work can be found at famousrelatives.bandcamp.com and his production with Palace of Buddies can be found at palaceofbuddies.bandcamp.com.

Comparable to the likes of Brooklyn-based band Anamanaguchi, Conquer Monster’s 8-bit dance sound will satiate the music taste of anyone who owned a now-vintage gaming console in their childhood. The two-man group comprising Daniel Romero and Joshua Faulkner, was brought together by a mutual love of all things computer.

“They had a third member, and I was just there to accompany because they were writing more parts than they could play,” says Romero. “Josh and I started writing our own stuff starting in January 2013, and we’ve been working on a lot of sci-fi, 8-bit dance stuff ever since—kind of just a really spacey shred fest.”

Conquer Monster found their niche in chiptune after years of growth and experimentation through different styles before combining their love of technology with music. Faulkner says, “Growing up, I was into a lot of punk music. I was in a punk band a long time ago. I played folk music for a long time just under my name—I played guitar and harmonica and I sang.

[In my spare time] I was kind of just building [instruments] and taking them apart.” He points to a mess of vintage computers and technology that are so over my head I couldn’t comprehend how they were used as instruments. Romero says, “Both of us are heavily math and computer influenced”—Faulkner interjects to say, “Nerds,” under his breath. Romero continues to say, “… I think that’s where the sci-fi vibe comes from, just being interested.”

What really makes this group interesting and ultimately sets them apart from most bands I’ve seen is their collection of instruments. “I started playing toy Casios as a child, then in high school, I migrated over to collecting analog synthesizers. My first synth was a Korg Delta. I’ve since obtained a Roland Juno-6, Roland RS-09, Korg Microkorg, Korg Poly-800 II and a Moog Lil Phatty, to name a few,” Romero says.

Faulkner’s setup is just as technical: He says, “I focus on turning obsolete computer equipment into instruments and playing them like synths. Specifically, I play an Apple ||c, Atari 2600, NES with powerpad, Gameboy, various circuit bent toys and multiple Commodore 64s.” You can see any band with guitars and a drum kit onstage, but when someone jams out on something like a Gameboy attached to a computer and worn like a guitar, it really shows talent and a passion for creativity.

The search for a band name was a simple one for the duo:  “There’s a Deltron 3030 song called ‘Madness,’ and there’s a line in there that says ‘Conquer my sponsors, they’re monsters.’ It sounded cool together, [but] it doesn’t mean anything, necessarily,” Faulkner says. When asked if they gain a lot of inspiration through Deltron 3030, they said they don’t gather much past his first release.

“Just the dystopian-future vibe of their first album—I don’t think we sound that hip-hop. We may have a little bit in there, but not a lot,” says Faulkner. “For the new album that we’re writing right now, we’re writing a comic book that goes along with it. There’s no title yet, but the synopsis is that the galaxy’s best assassin decides that he no longer wants to kill, and through his attempts to outrun his former employer, he convinces a planet of pacifists to fight for their home.

It’s a futuristic dystopia where music is used to record the unique physical, emotional and mental data of a person for the purpose of traveling from planet to planet via radio waves. Music as an art form has been banned, so naturally, there’s an illegal underground music scene,” says Faulkner. Romero says they have about eight or nine tracks so far.

Conquer Monster have recently played quite a lot around Salt Lake, with more shows coming to. “[Our live shows are generally] two tables filled with synths, old computers and samplers. We start our set with a dramatic sci-fi–themed introduction. Most of our songs are pretty dancey, so we love to watch people dance to our music.

When possible, we like to project glitched-out, warped VHS images behind us, so you might see those, too. We are nerds at heart, so you’ll hear a math lecture or audio clips from old science fiction movies playing during our set,” says Faulkner.

When not producing music, the two are either working or spending time with their families. Romero is a Computer Science student at Weber State, and Faulkner teaches math, engineering and music at Walden School of Liberal Arts in Provo. “Half of the time, when Josh and I hang out, we’re talking about computers, programming, mathematics, time travel or video games, and the other half of the time, we’re writing music about it all,” Romero says of how their shared interests in other fields bring them together.

The duo has talked about touring the West Coast, but plans to stay around and get in as many local performances as they can. You can find more on their website, conquermonster.com, before they take over Localized on May 10.