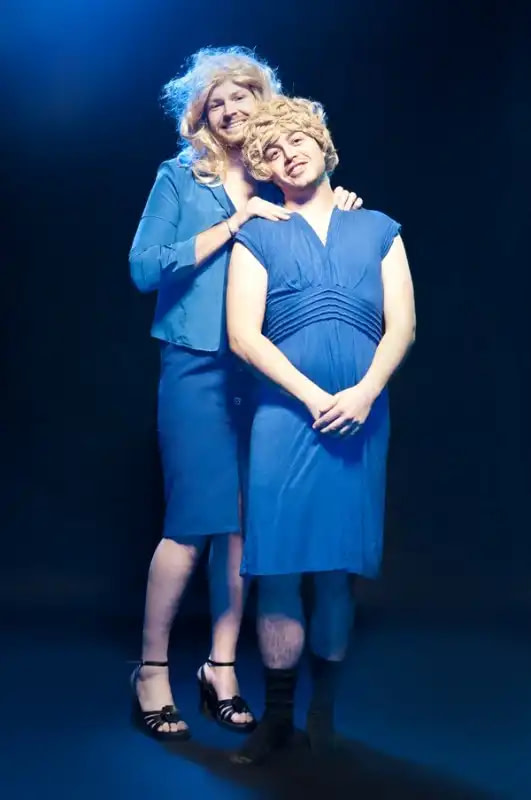 Nick Foster and Tim Myers have made music in Salt Lake in many incarnations over the last 12 years.
Photo: Chad Kirkland

Nick Foster and Tim Myers have made music in Salt Lake in many incarnations over the last 12 years. The two started jamming together in junior high and went on to play in a myriad of other bands of various genres. Myers did time in Tempered, whom I watched play a ceiling-tile-destroying hardcore show in my late father’s warehouse office when I was a youth.

As a counselor at a kids’ summer camp, I witnessed Foster’s pop-rock band, My Density, play a weird gig for a crowd of asthmatic children. Then Foster and Myers were bandmates in metal act Pushing Up Daisies, and continued on in more projects than I can name. Palace of Buddies, the current musical incarnation of Foster and Myers, plays an infectious assembly of electro-pop and dance-rock.

I sat down with the Buddies to pick their brains about their evolving sound, their new record and their plans for 2012.

SLUG: As Palace of Buddies, the two of you create music that seems like it should take three or four musicians to make, especially while playing live. How do you manage that?
Myers: In the beginning, we’d have an idea and then we would buy a piece of equipment to try to produce an idea that we had. It got to the point where we had a lot of stuff. It takes a long time to set up…
Foster: I did drums and keyboards at the same time in Pushing Up Daisies, so that fueled that idea… We both sing, I can do keyboards and drums, and Tim can play the keyboard with his feet with a little MIDI controller organ-pedal thing.

SLUG: In last year’s SLUG interview with it foot, it ears, Jason Rabb told us that Foster imposed a rule for Rabb as the guitarist: no strumming. Does Palace of Buddies have any musical rules?
Foster: I used to have a hard time incorporating the MIDI playback thing. I wanted it to be all live… I used to be like, “Fuck, man, not the computer. I don’t want to be one of those bands.” … I want to sound like a two-piece more often. Tim wants to have a big sound and I want to have sparseness sometimes. That’s always something in the back of my head, a rule I want to enforce that doesn’t come naturally to us.

SLUG: You released your new album, Summertimes, in September. How do you feel about Summertimes compared to your first record?
Myers: The first record was written when we didn’t have a lot of the equipment that we have now. It’s definitely progressed. The first album, Nick recorded. …I think we went back and forth a little more on this album.
Foster: I felt like I put more of a concept into the first one than this one. I don’t like one more than the other. I think this one maybe sounds a little better because we had more gear and we had more know-how… I think it just sounds more poppy.  It’s less harsh than the first one.

SLUG: Why do you choose to self-record?
Foster: Because it’s cheaper and we can take as much time as we want. If we had a good engineer–if we were going to Andy [Patterson] or Counterpoint or something–we could probably get something that sounds more “studio pop” legit, but that’s not what we want.

SLUG: Are there any musicians, local or otherwise, that you would like to make music with?
Foster: There are some classical instrumentalists that I’d like to write for or conduct or have the opportunity to have them realize some scores that are chamber music. Jason Hardink, the principal pianist for the Utah Symphony, I’d like to work with that guy.
Myers: There are musicians in Salt Lake City that I definitely admire. David Williams is a pretty amazing guitar player. I like watching him. Mike Torretta [Laserfang] is a pretty cool drummer… Salt Lake has plenty of really talented musicians.

The Buddies have plenty more planned for this year. They have already begun work on a third Palace of Buddies album and plan to go on a couple week-long tours. Foster is expecting to release some solo material. Myers plans to release a motion-picture soundtrack album from his film scoring work on Ryan Baxter Reenactor. Make sure to put on your blue dress and join Palace of Buddies as they get the party poppin’ at SLUG’s Blue Dress Birthday Bash on Feb. 17 at The Woodshed.