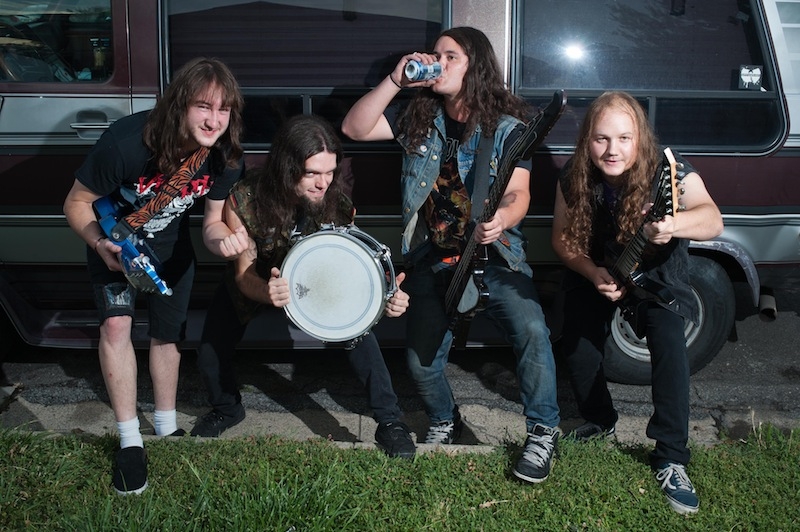 On September 12, at 9 p.m. sharp, Urban Lounge will host a night of metal might where hot-rockin’ thrashers Deathblow and symphonic steel forgers Sonic Prophecy will be inducted into the SLUG Localized hall of fame, and Mister Richter will open. The show is made possible by sponsors Fat Tire, Spilt Ink SLC and KRCL 90.9FM, and by readers not unlike yourself.
When I arrive at the house where Deathblow practice, the music blaring up from the basement perfectly complements the environment where it’s being forged. Old-school death thrash rattles the beer cans strewn about the floor, and foul odors swirl about as the band rehearses a number about being covered in malignant tumors. Add these elements to the home decorations (which include a signed Iron Maiden picture and a framed portrait of Chuck Norris), and it all makes perfect sense.

Holger, the band’s frontman, vocalist and guitarist, explains that Deathblow formed in Logan, Utah, playing covers of bands such as Death and Megadeth, “and other bands with ‘death’ in their name,” says Udem (guitar), who bears an uncanny resemblance to Steve Perry circa 1985. After a short while as a cover band, they relocated to Salt Lake City and began penning their own songs. Since that time, the band has had numerous lineup changes and instrument reassignments, but the current form of Deathblow is tighter and more technical than ever.

Udem and Holger invited Paul Lachica, who has played in Killbot and Year of the Wolf, to play bass for the band after all three attended a Possessed concert together in Denver. Holger explains it concisely, saying, “We needed a bass player, and Paul wanted to join a band. So, that kind of worked itself out.” Lachica learned the songs and was quickly hired on as a full-time member.
After going through three different drummers, all that was left was to fill the position with somebody who could hang. Enter Dan Alexander, an extremely polite multi-instrumentalist who also grew up in Logan. His portfolio includes Deicidal Carnage, one of the best death metal bands to ever come out of Utah. “We knew Dan from Logan and needed a drummer, so we asked him [to join Deathblow]. The rest is history,” says Holger.
An important part of their history is their debut album titled Prognosis Negative, for which they held a release party at Burt’s Tiki Lounge with Merlins Beard on Jan. 24. The tracks on Prognosis Negative are a mixture of spiced-up older material and newer songs, including “Defcon 1,” “Riddled With Tumors” and “Masters of War.” The artwork, drawn by Brandon Voeller, is fucking awesome and is featured on the new batch of Deathblow T-shirts for sale.
When asked about inspiration, Holger explains that movies like Phat Beach, Thug Life and Surviving The Game are extremely important, and he has seen them countless times. Holger’s girlfriend, Deici Alcala, whispers something in his ear. “Oh yeah,” says Holger, “and Seinfeld.” But, like true artists, Deathblow are all about the music, first and foremost—and Holger will be the first one to tell you that.
“The thing about music,” Holger says, “is that it makes you wanna make music. It’s a full circle.” Udem, who played drums for the band initially, finds inspiration in various styles of music including rock, classical and even obscure, experimental electronic groups like Tha Hobgoblanz. “Only the classics,” he says.
Deathblow usually play in local bars around town, like Willie’s and Burt’s, but they’ve ventured out of the state before. In fact, the Deathblow boys, I learn, had just been rehearsing the set list they created in preparation for a two-week West Coast campaign, which they dubbed the “Miles of Bile Tour,” a nod to Alturd $tate$’s “Piles of Bile Tour.”
When they aren’t practicing or on the road touring, the band likes to relax. “Drinkin’,” says Lachica, before I even finish asking about their life outside of music, and proceeds to polish off his beer. Holger says, “Watchin’ TV … ya know, just kickin’ it,” says Udem. “Sleepin’.”
Deathblow seem even more laid back when it comes to attendance numbers—as long as a few people are enjoying it, the show is successful enough. Luckily, Deathblow aren’t one of those bands that throw tantrums when their shows aren’t sold out. “I don’t care if it’s five people [at a Deathblow show], as long as they’re into it,” says Lachica.
Be sure to catch them at the Sept. 12 Localized with Sonic Prophecy and opener Mister Richter. If you buy Deathblow enough booze, you may even be able to get one of them to sign that VHS copy of Surviving The Game sitting on the “frequently watched” pile of movies by your TV. THRASH!
Listen to their music at facebook.com/dethblo and deathblow1.bandcamp.com.