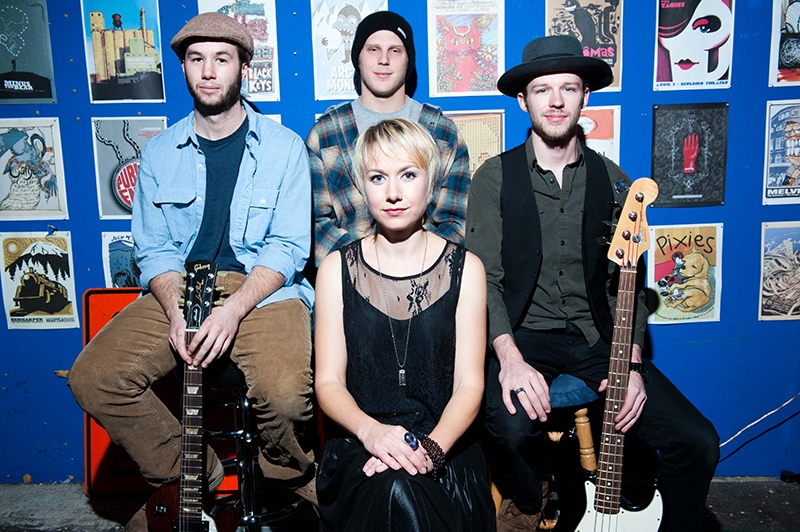 January’s Localized starts our new year off with the classic rock lineup of Merchant Royal and Big Wild Wings, two of our fair town’s lovely femme-fronted projects. The evening gets an extra dash of feminine mystique with Night Wings opening the night, and the whole local-loving event is sponsored by Uinta Brewing Co., KRCL 90.9FM and Spilt Ink SLC. Head on down to the Urban Lounge and enjoy it all for only $5. Doors open at 9 p.m.

When the members of Merchant Royal set off on their musical voyage together, they chose a name to suit their ambitions. Bassist Kevin Schultz stumbled across the story of their namesake ship while perusing the “On this Day” section of Wikipedia’s main page. Laden with nearly one billion dollars’ worth of gold, the original Merchant Royal, a 17th Century merchant vessel, sank on Sept. 24, 1641, and has never been confirmed as recovered. “It had all the makings for something cool,” Schultz says of the story behind the name. Luckily for us, the band Merchant Royal is laden with great tunes, and there’s no stormy weather in sight. This bluesy four-piece has been delivering the goods all over SLC, and this past August, to the delight of the many fans of their live show, they released their first EP.

It hasn’t always been smooth sailing for the group, who has added and changed some members since the original lineup. These days, though, they seem to have a healthy chemistry worked out regarding everything from songwriting to booking shows. They each bring their own set of skills and experiences to the table. Singer Christina Manteris has been singing and songwriting for years, and as the face of the band, she reaches out to venues and other bands to get many of the bookings for Merchant Royal. Guitarist Ryan Arnold works with Manteris to create the melodies and chords behind the vintage-inspired material, while Schultz uses his formal education in music (he studies at the University of Utah) to help refine and guide the tunes with his sumptuous bass lines. Drummer Jake Gloschat provides the backbone for the project with his consistent and considerate beats. He is a decidedly polite drummer, matching his intensity to the music rather than asking that the music match him, a highly desirable quality for a percussionist in a band where melody and voice carry the project.

Manteris’ voice really does shine in this style of music, which is as much to her credit as it is to the three musicians creating the material and highlights her smooth and soulful vocals. Sometimes band members can get carried away thinking about their own role and focus on how to come out on top in the mix. Merchant Royal members seem to have an agreement about how the band should sound as a whole, and their cohesive live performances show off their talents as a group. Inspired by classic greats such as The Doors, Pink Floyd, Jimi Hendrix and Eric Clapton, the tunes are a beautiful match for Manteris’ voice. “Vocally I’m influenced by Patsy Cline a lot … That’s what I listened to growing up, and my mom always sang [her] in the shower,“ she says. “Ever since I was little … I wanted to sing like Patsy Cline … soulful, sad,” says Manteris. The foursome absolutely achieve the soulful, vintage sounds of the classic era of rock they aspire to.

The group reinterprets many of their classic favorites as covers. The real excitement for any band, though, is creating new material. With at least 20 Merchant Royal originals on the roster, a new EP out since August, and new material always in the works, these guys mean serious business when it comes to putting in the work. They put no rules on their songwriting, with each member welcome to bring in lyrics, riffs or even beats to get the process going. With so much talent among the four of them, the potential for excessive egos could hinder the process, but with such good heads on their shoulders, they use their skills for good instead of evil and put it all on the table, musically speaking.

Next on the agenda is taking over the world, of course, as it is for many ambitious musicians. Though expensive and often uncomfortable, touring still seems to be a necessity in the otherwise ever-changing landscape of the music industry, and Merchant Royal does not shy away from the prospect. Schultz just got back from touring in October with his friend Charles Ellsworth, and traveling 4,000 miles in eight days gave him a taste for life on the road. With a couple of members finishing up school and other obligations in the next year, the horizon will be wide open and calling their names. “Eventually, all 50 states would be great,” Schultz suggests and Arnold adds, “It’d be nice to tour the world … Why stop at the 50 states?”

With plenty of local shows under their belt and visions of regional, national and international expansion dancing in their heads, Merchant Royal certainly have a bright future. When I ask what they’d like the world to know about them, Gloschat replies enthusiastically, “We love them!” With their talent, drive and enthusiasm, there’s no doubt that the world will love them, too. Come down to the show on Jan. 9 and sail away with your very own Merchant Royal disc, or check them out at merchantroyalband.com.