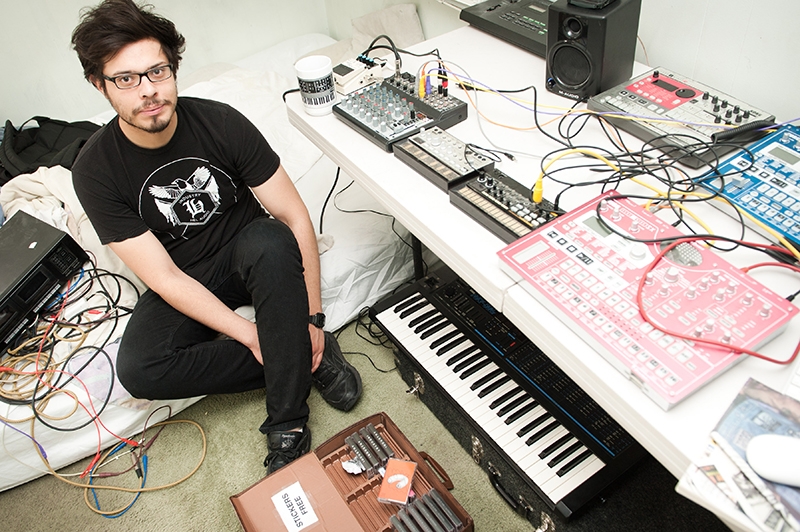 This month’s Localized is going to be an auditory treat. Starting off the night, Blade will open with some killer ambient improv soundscapes. Expect to get groovy with the chiptune, foot-working sounds of RS2090. The night will end in a crescendo of intricate loops and craftily selected samples by master of sound Mooninite. Stop by Urban Lounge March 13 at 10 p.m. for just $5, sponsored by Uinta Brewing Co., KRCL 90.9FM and Spilt Ink SLC.

Mooninite (Andrew Aguilera) has been steamrolling his way through the music community over the past few years. Most recently, he’s released a solo album titled Soda, created a monthly event at Diabolical Records and started a new project, Angel Magic. Needless to say, Aguilera has his hands full— it seems like he prefers it that way.

He didn’t begin making music until after he was out of high school. Before that, he was more focused on filmmaking, but what he really fell hardest for were soundtracks—particularly Vangelis’ work on the Blade Runner soundtrack, which makes me laugh—not because I don’t agree, but because I can see how it has influenced his music. The flow from track to track reflects the fluidity found in any Mooninite release. Thus, I learned that it was his desire to tell a story through music that drove Aguilera to sign up for piano lessons at a local shop in Orem. He then turned his attention to electronic instrumentation, picked up some synths and began programming. Aguilera hooked up with RS2090 shortly thereafter, and the two released a self-titled album through local label Hel Audio. The duo split in 2012, but Aguilera has had several releases since then, covering a range of musical preferences from ambient to experimental to hip-hop.

There’s no hidden meaning to Aguilera’s music. With his most recent release, Soda, he tried being as literal as possible. It’s a bubbly, carbonated dream. “Cola” is rich and crisp with a solid, hearty beat, while “Blue Hawaiian” sounds like a synth-infused, Caribbean fantasy. “C.R.E.A.M. Soda” is as smooth as its name—a little milky and downtempo, with a shot of Chicago house flair. When making his beats, Aguilera uses Korg Electribe–type series hardware. “That was what I first started using when I started making music,” he says. “I wanted something that could be more of a show and something more hands-on.” Aguilera tells me that he enjoys sampling clips from around the web. The glitchy sound of a slow-loading video not only speaks to him, but his generation, and he loves stitching it into his music. “The shitty bitrate of a YouTube video is our vinyl crackle,” he says. “I love that.” It makes sense when you look at it that way. Mooninite creates futuristic sounds that have the capability of appealing to others on a wide scale without limiting himself to one specific genre.

It sounds simple, but if you’ve ever seen him perform live, Mooninite is practically drowning in a sea of wires, switches and knobs. I ask if it’s difficult to read an audience with so much going on right under his fingers, and he laughs and admits he wouldn’t really know, since he hardly pays attention. “Honestly, I black out,” he says. “I don’t look up. I mean, I want people to have fun, but I’m playing what I think sounds good.” I trust him. He knows what he’s doing up there. He’s been attending shows since he was a little awkward guy, so he’s familiar with the drill. Back then, “I thought everyone knew each other, and I didn’t know anybody, and it felt like an exclusive thing,” he says, “but I don’t want people to feel like it’s an exclusive thing. I want everyone to come to shows, learn about it and meet people. Nothing with music should ever be exclusive. It should be available to everybody.” That’s one of the reasons he’s started a monthly event called Industry held every third Saturday at Diabolical Records. It features exclusively electronic artists from the community, showcasing various Hel Audio artists. Aguilera purposefully wants to encourage people to pay attention and stop lumping artists into the same genre of electronic music. “It’s a bit overwhelming that there’s so much music that’s changing all the time,” he says, “but I kind of like that there’s such a variety.”

All of Aguilera’s projects aim to create an atmosphere that makes people feel good. “I wouldn’t say there’s any real mission I’m trying to accomplish,” he says. “I’m trying to put on a show that people can get caught up in and enjoy.” Personally, I believe that electronic music, more so than other genres, possesses the ability to cross so many cultural boundaries. There’s something very primal about a simple drum beat. What Mooninite is doing is specifically geared toward our generation of Internet babies. I hope that more people realize that interacting with electronic music can be more than just a show but an experience meant to be shared. “Maybe people are paying attention,” Aguilera says. “We just have to find those weirdos. They’re out there.” Stop by Hel Audio’s next Industry event March 21 at 8 p.m. sharp and be sure to check out Mooninite’s music on Hel Audio’s Bandcamp, ’cause everything this kid touches is pure gold.