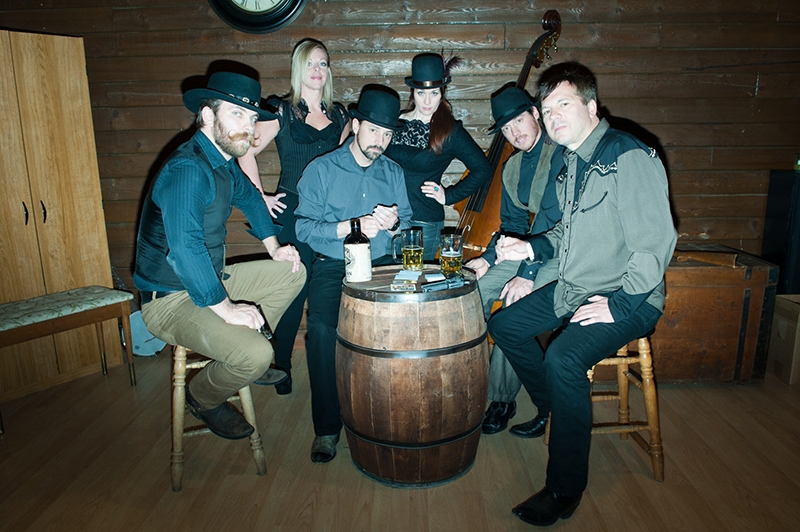 Localized: Six Feet in the Pine

This month’s Localized is going to be one hell of a musical showdown. Kaleb Hanly will open and set the scene for a night of untamed folk and bluegrass. Following, Porch to Porch will heat up the stage with their wild riffs, foot-tapping harmonica and bending elbows. The night will end in a Western frenzy by Six Feet in the Pine, who aren’t your average church-goin’ folk, though they’re serious cowboys, strummers and pluckers. Stop by Urban Lounge May 15 at 10 p.m. for just $5, sponsored by Uinta Brewing Co., KRCL 90.9FM and Spilt Ink SLC.

Six Feet in the Pine look like they just stepped out of a Western saloon in the 1920s—but not in a steampunk kind of way. “There’s some real camaraderie to [dressing up],” says fiddler Callie Reed. Utah influences everything from their outlaw outfits to the music they play, drawing Utah’s Western setting and heritage into their musical style and fashion.

When the weather is nice, they jam on the front porch in the rolling hills of the Avenues. “It’s part of bluegrass,” says guitarist Noel Black. “On the porch, outside with your neighbors—it brings people together.” Porch playing is both communal and practice, explains Devin Lee (vocals and banjo). “People come and sit down with their kids,” he says. “It really prepared us for the stage, to get up in front of people.”

Six Feet in the Pine began with a KSL.com ad success story, when Lee and Matt Conlin (bass) came together over a love for the banjo. After a few band members came and went, fate brought these six talented musicians together, and they began pursuing their true vision for Six Feet in the Pine. Mike McGinn first listened to the band’s EP and joined shortly after, bringing a new element to the band with the mandolin. As one of the other newer members of the band, Reed explains how easily the band allowed her to catch on to the dark and flowing rhythms while adding a new feel with the fiddle. “I grew up playing mainly classical,” Reed says, but “bluegrass or a fiddling vibe is a way to say something I’ve never said before. … These people are so great and consistent at what they do.” Since the previously released EP, Reed, McGinn and Conlin have joined, but this band is definitely sure of where they’re going. “This is ‘the band,’” says Lee, and with assurance, Reed agrees: “We’ve arrived,” she says. The next step for the group is to finish their full-length album.

The anticipated full-length album is coming out in late May 2015, which will include the three tracks on the EP. The new album is “[a] little bit of what the EP was,” says vocalist Jennifer Yurth. “Those [EP] songs are going on the album, but are being totally re-recorded with all the new members. It’s going to sound completely different. It’s going to be reborn. It’s going to be awesome.” The full-length introduces a new sound, with the high tone of the strings on the mandolin, an essential bluegrass sound that didn’t exist on the original EP. “We usually have a spray bottle to cool down [Mike’s] fingers,” Lee says jokingly. The standup bass adds to the dark, groovy vibe, with its low, drawn-out plucks and bows.

Resisting the pigeonhole to be entirely labeled as “bluegrass,” Lee says, “I like to put the word ‘dark’ in front of bluegrass,” also suggesting the term “blackgrass” as more fitting. “We are generally put into bluegrass—we don’t necessarily agree with that, but that’s what we’re lumped into. It’s usually pretty dark lyrics, even though it’s happy-go-lucky music,” says Lee. As Reed puts it, the lyrics aren’t the “everyday story that I drove my truck to the gas station with my dog in the back” type. The band is dedicated to a narrative project that tells stories about trains, drinking, massacre and murder—characters seem to come to life through the haunting rise and fall of Yurth’s vocals and the thumps and strums during instrumental breaks.

Finding inspiration and possibility in shows and films, Lee says, “It is a really big goal to get [our music] used in something like Hell on Wheels or Dead Wood. Shows like that, for me, are some of my biggest influences for the songwriting.” The dark tone is somewhat Tim Burton–esque: Reed says, “I can almost see Tim Burton producing these stories. They are dark and a little twisted.” Sometimes, though, the music speaks for itself. Yurth describes accounts of standing outside and listening to the band play through the glass, vocal-less. “[The songs, musically] are stories within themselves,” she says. “I can totally see the songs in an old, black-and-white, stop-action 1920s film.”

Right now, most of the band’s time is dedicated to finishing the full-length album. When they aren’t in the studio, they play shows around the Salt Lake Valley at venues like The State Room, In the Venue and Bleu Bistro, and have opened for bands like Mountain Standard Time. The band is hoping to jump on the festival wagon in the latter half of 2015 and tour around other core Western states (e.g. Colorado, Nevada, Wyoming, Idaho and Arizona) after the full-length drops. In the meantime, keep up with Six Feet in the Pine on Reverbnation and “stomp by” Urban Lounge on May 15!