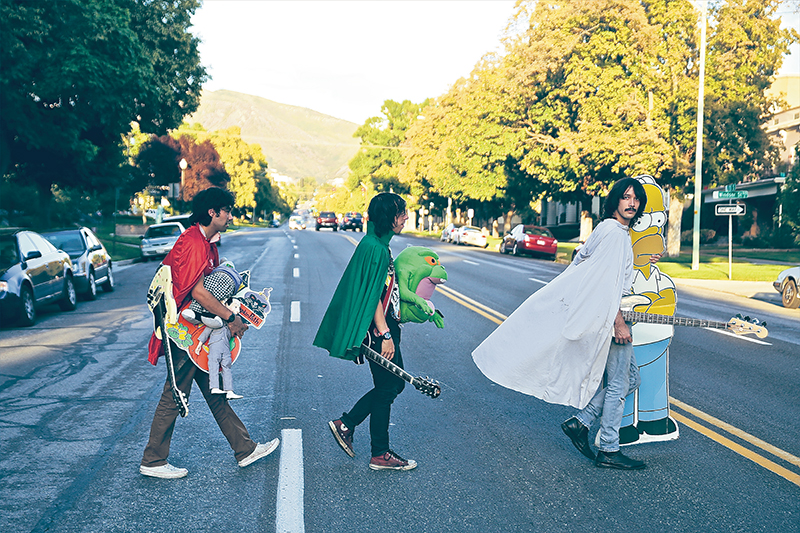 October’s Localized celebrates three of Utah’s most dynamic and experimental bands: 90s Television and Bat Manors, along with The Artificial Flower Company as support. Swing by Urban Lounge on Oct. 22 for an absolutely free, 21-and-up show. The night’s event is sponsored by Spilt Ink, High West Distillery, Uinta Brewing and KRCL 90.9 FM.

Listening to 90s Television is like funneling 40 years of pop culture at once through the mono speaker of a VHS/TV combo set. At varying intervals throughout all four of the records that they’ve self-produced in the last five years, 90s drift from being dreamy to a playful, warped, excited cabaret to even burned-out. However, it’s a fairly common mistake to read their name as an explanation for their music. For Ginger Brown, the expectation that their sound aims for a 1990s nostalgia tribute is all wrong.

Sonically, this seems to make sense. 90s Television isn’t just another peg in the predictably impending trend of revivalist music. Rather, the idea for 90s grew between Brown and PJ Ramsey when they were teenagers. After sharing the experience of throwing a chair through the window of an abandoned Hogie Yogie, the pair would eventually go on to hang out and jam together to the albums of bands such as Weezer, The Strokes, Electric Light Orchestra and The Beatles.

“We were in a Strokes cover band all throughout high school,” says Brown. “We both worked at McDonalds at the time, so we would play shows in the Play Place … and to get people to come, we would say ‘FREE BIG MACS,’ but there were never any free Big Macs.”

Not even I could come up with a more perfect metaphorical representation of their sound than the two of them playing The Strokes over the sound of kids laughing in a multi-colored ball pit—cartoon prints dancing across the walls. In any event, Brown and Ramsey were initially attracted to the faded sound of Is This It, and when combining this influence with a retro TASCAM tape deck and a dash of thrift-store nostalgia, they began to explore their new sound.

To date, 90s Television have released four cohesive albums: Raw Justice, Going Blonde, Small Pumpkin and Bad 4 The Tooth. Almost all of the songs have been written by Brown and Ramsey, with a few Animal Collective–inspired exceptions from Brown’s cousin Leaf Green. For Ramsey, who’s a brilliant stop-motion animator, songwriting is seamlessly paired in his mind with creating his characteristically collage-like, cinematic quality.

“I always thought I was more visual about it,” says Ramsey. “I like seeing the song take form because each song has its own character, like [the sound] could be more of a candy bar than a guitar, more of a puppet than a person.”

As the main visionary for their recordings, Ramsey’s technique involves surrounding everyone with various media stimuli (movies, video games, soundtracks, toys, etc.) while they play—usually picked up from secondhand stores. Because of this, walking into their jam space feels like stumbling into the loot of Deseret Industries–raiding dadaists.

“When I first started 90s with Dirt Cocaine,” says their guest drummer Special Guest, “I was uncomfortable at points because they were like, ‘We don’t have a snare, so we’re going to use a squirt gun as a snare,’ or, ‘We don’t have claves, so here’s a cup and a big ass wooden spoon.’”

“If you fool them,” says Ramsey, “that’s the trick.” For their 2015 double-EP release, Bad 4 The Tooth, Brown explains that their sound is continuing on the path that they’ve set out for themselves from the beginning. With regard to their previous album Small Pumpkin (featuring the cartoon of a half-eaten Halloween candy), Bad 4 The Tooth is best thought of as Volume Two: the cavity.

“[Small Pumpkin] is almost too wholesome, too sweet, too poppy …” says Brown. “I remember talking to Green about how nowadays, our candy is like partying too much, and the toothache is like a hangover. … We’re kind of preaching about the excess.”

And if you think about them in terms of the excess, 90s Television begin to make sense in their meshing of themselves in a Sgt. Pepper fashion among the onslaught of characters and sounds that have emerged since the invention of television and pop music. In a way, 90s Television reflect all of our media-warped childhood psyches back to us—simultaneously embracing and taking the mickey out on what Guy Debord would call “the spectacle.”

As a self-described “Muppet-y album,” though, Bad 4 The Tooth maintains the endearing feeling of fun that makes 90s Television so likable. For this release, expect songs about bug collectors, abandoned kittens, a song called “Hand Cream” and SEGA Genesis samples galore.

You can hear their one-of-a-kind recordings for yourself at 90stelevision.bandcamp.com, and don’t forget to catch their locally famous stage setup at Localized on Oct. 22—capes are welcome.