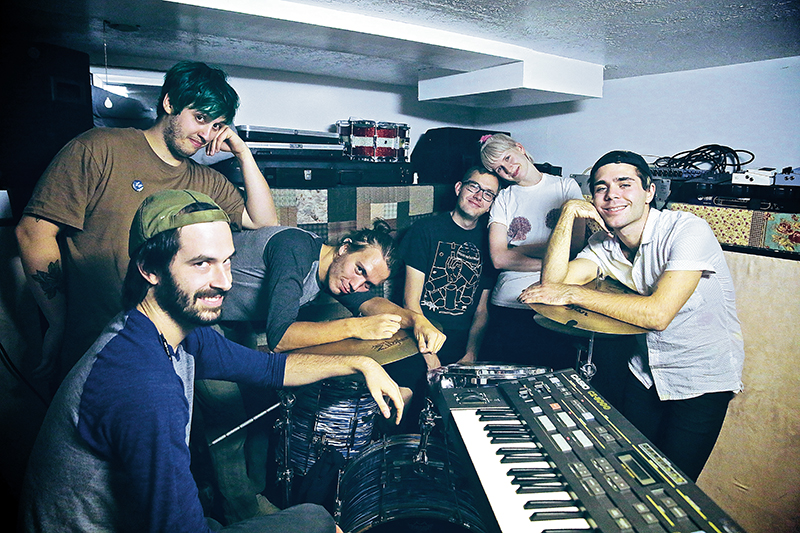 October’s Localized celebrates three of Utah’s most dynamic and experimental bands: 90s Television and Bat Manors, along with The Artificial Flower Company as support. Swing by Urban Lounge on Oct. 22 for an absolutely free, 21-and-up show. The night’s event is sponsored by Spilt Ink, High West Distillery, Uinta Brewing and KRCL 90.9 FM.

In January of this year, Bat Manors released their debut full-length album, Literally Weird—a collection of beautifully crafted, multi-instrumental ballads that meander through the sweet, melancholic headspace of their primary creator, Adam Klopp. As a writer, I try to repress such ambitious sentences as these, but as a listener, Bat Manors provoke like a whispered truth.

“I was really into a lot of Woodsist and K Records songwriters like Bonnie Prince Billy, Angel Olsen, Antony & The Johnsons,” says Klopp. “It doesn’t really come out at all, but Mount Eerie was a main source of inspiration in terms of layering and multi-tracking.”

For those who are unfamiliar, Klopp’s sound is ethereal and patient—usually taking minor pop-chord progressions and ornamenting them with vocal melodies that are about as predictable as the turns of a falling feather. On his own, Klopp’s compositions could almost work as sorrowful folk tunes. However, with the addition of strings, woodwinds, percussion and vocal harmonies, Bat Manors expand Klopp’s otherwise soft soliloquies with an atmospheric breadth that adds weight and dramatic sensibility.

Getting to this point wasn’t easy, though. With the help of Cope and Meisenbach, the recording process took around two months to complete from start to finish—and the work definitely shows. Almost each part in the entire piece has been layered with an identical track over it to create a deeper resonance in the sound. When you consider the number of parts that are operating in each song, the overall time spent tweaking and perfecting is staggering.

Production quality aside, Klopp began forming songs around the time of his exit from the Mormon religion. “I wrote the songs while I was going through this whole process emotionally and started the band on the tail end of it,” he says. “[Literally Weird] wasn’t a concept album going in as a planned thing, but it was conceptual in that it became a narrative of my experience.”With this in mind, it’s easier to interpret the somewhat ironic tone of Klopp’s lyrics. Almost every problem expressed in Literally Weird exposes the real-life conflict between the literal and figurative interpretations of words (particularly in religious language)—giving a compelling edge to his voice’s serene delivery. Each poem seems to work as a cultural Rorschach test between people of faith and non-believers because they can be read in two different ways—albeit, not always so subtly.

“The rhetoric for a lot of the songs are pretty anti-church, but a lot of people listening at Velour were so into it for the opposite reason,” says Hooper.For example, tracks like “Manifest Destiny,” “Comfortable Hole, Bye” or “The Cruise” stand out lyrically as Klopp mentally turns religious language against itself—oftentimes looking for empathy or pushing moral standards to unsatisfying conclusions.

“[‘Manifest Destiny’] is about the concept of forward nation or destiny correlating with agency,” says Klopp. “It’s two contradictory concepts. Within theologies, a lot of times, it’s set up so that there has to be a protagonist and an antagonist in the story … like how in the narrative of the Bible, Satan or the adversary, or the people who crucified Christ, are almost necessary components to salvation. Evil becomes necessary for the sake of this whole process. However, when you apply it to the real world, it doesn’t work that way.” Still, the political content is only partial to the band’s inventive and communal personality. After all, with a name like Bat Manors, it would be a mistake to think that these folks are steeping themselves in the pressure of complete indie-political seriousness. “The songs are sentimental, but also they’re serious and not serious,” says Klopp. “It’s a theme.”

For the observant, this playfulness can be somewhat predicted in the tongue-in-cheek title. “We heard a strange person say Literally Weird one time,” says Meisenbach. “He was trying to describe people who he thought were ‘so weird,’ so he said ‘literally weird’… which doesn’t make sense, but it makes you think of it in a humorous way.”

“But it seemed really appropriate for the album title,” says Klopp. “I don’t know if I intended Literally Weird to be necessarily funny, but I thought the phrase was really funny … like he was trying to muster the strength to articulate an experience, and that was somehow the thing that he got ahold of when he was like, ‘How do I describe these people?’… and that [failure] is part of the sentiment of the phrase.”

You can check out Literally Weird, as well as a few side tracks, at batmanors.bandcamp.com or on iTunes. Although Bat Manors are not recording yet, this should keep you pacified as they continue to gather material for their distant sophomore record—and don’t forget to catch their show with 90s Television at Urban Lounge on Oct. 22, right after The Artificial Flower Company.