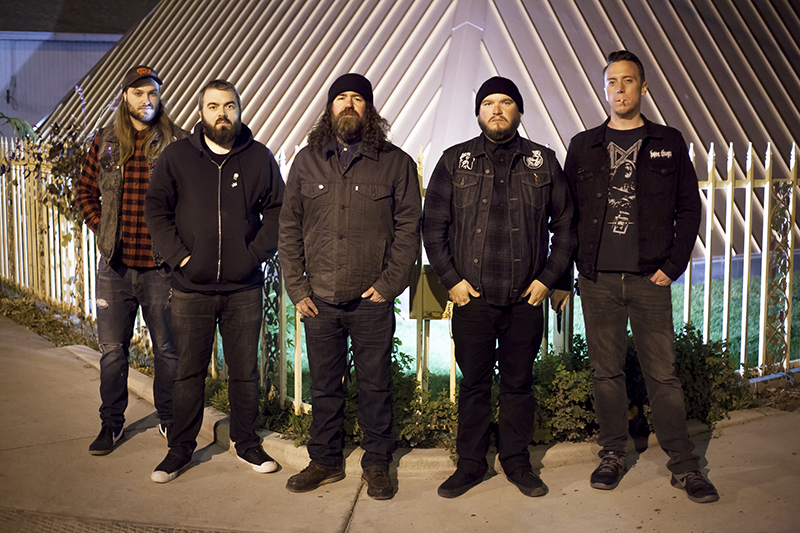 The Winter Solstice: the time of year when night outweighs day, darkness looms at its peak and the crème de la crème of the grim underbelly of Salt Lake’s metal scene take to the Urban Lounge stage for SLUG Localized. This month features the sheer brutality and aggression of blackened thrash outfit EXES and the impending doom and grim theatrics of the atmospheric Darklord, with Korihor throwing their hat into the ring for an evening filled with headbanging, moshing, drinking and sacrificial rituals. As usual, SLUG Localized is a free, 21-plus show and is sponsored by Uinta Brewing, High West Distillery, KRCL 90.9FM and Spilt Ink SLC.

Exes are a band unlike anything I’ve ever encountered—not just because their sound incorporates different multitudes of black metal, thrash, hardcore, D-beat and punk rock, and not just because the shared years of experience between each band member amounts to an eternity by rock n’ roll standards, but because EXES are the first band whom I’ve interviewed over dinner. The evening wore on as we sat in the Hoof & Vine steakhouse, and between the laughs and rising and falling levels of our wine glasses, I was regaled with how EXES came to be and what is to come in their future.

In 2014, Phil White sought to create a band that fluently blended punk, thrash, D-beat and black metal. Despite having known each other for years, the lineup consisting of White on vocals, guitarist Dreu Hudson (formerly of I Am The Ocean), guitarist Levi Lebo (formerly of xCLEARx, The Kill and New Transit Direction), bassist Skyler Goddard and drummer Alex Caldwell (of Breaux) didn’t come all at once. Even in the middle of creating an album, the band went through changes in their lineup and, incidentally, their sound. “We actually recorded eight songs with a full-length in mind, and we decided to take the band in a different direction,” says Hudson. “We trashed five songs and very deliberately selected Levi to join the band. Having him has given new life to this band, and I love what we’re doing with him.”

The camaraderie among the band members is evident—these aren’t five random guys who decided to form a band, but rather kindred spirits whose years of friendship and shared tastes solidified them as a music group. “I think that being close with your bandmates is important,” says Hudson. “I’m not in this band because I’m the best guitar player by any stretch of [the] fucking imagination.” Goddard agrees, adding, “Chemistry is key. If chemistry doesn’t work, I don’t give a shit about how good your band is.”

Five fingers make a fist, and with a fully vitalized lineup, EXES released their ferocity in their self-titled EP, which consisted of the three remaining tracks from the ill-conceived full-length. “Recording was a fucking nightmare!” says Hudson. “We recorded with Randy Cordner in a van down by the railroads. We didn’t record in it out of necessity—he had a studio, but we just liked the way the van sounded.” “Shallow Grave,” “Fire and Fury” and “Nothing But The Knife” all intricately combine the high-velocity riffing of thrash and the atonal progressions of black metal, with the blunt abrasiveness of punk and hardcore as an overlay. Caldwell’s pulsating blast beats and White’s combination of screams and growls ultimately carry this collected product of aggression. “I legitimately think this band has a personality disorder,” says Lebo. “It doesn’t know what it wants to be, but it’s all awesome.”

There is nothing more honest and raw to a human than emotion, and like most metal bands, EXES’ source of inspiration derives solely from anger and frustration, which is reflected in both their name and their lyrics. “I hate everything in this world,” says White. “I really do. I love my friends, my family and the surroundings in my life, but for the most part, I don’t like a lot of things, people and situations. I want to harness all the things that my friends dislike in this world and I want to spew about it. It’s very Neanderthal and immature, but it’s honest.”

EXES’ EP was released in conjunction with their music video for “Nothing But The Knife” via Metal Injection. Shot in EXES’ band room with White taking real drugs off of Goddard’s father’s WWII knife, producer Matt Brunk created a fast, violent and sporadic masterpiece. With the video and EP gaining them a favorable amount of traction, EXES have very little planned in the realm of touring. “It’s not that we feel entitled or anything,” says Hudson. “We all did the road dog thing for years and loved it, but now we have solid careers and families. We will play festivals—we’ve submitted for Tree Fort and Psycho Fest, and we will do Crucialfest next year, but we will only hop on tour if it’s something big enough to put our jobs and families on hold.”

In the meantime, EXES will continue emulating this fucked-up existence while simultaneously drinking, partying and having a good time. “In the spring, we will release our new EP that we recorded with Andy Patterson,” says Hudson. “The plan is to write and record good records, play fun shows, try to get on festivals and have fun and still have a pot to piss in. Also, fuck Snapchat!”