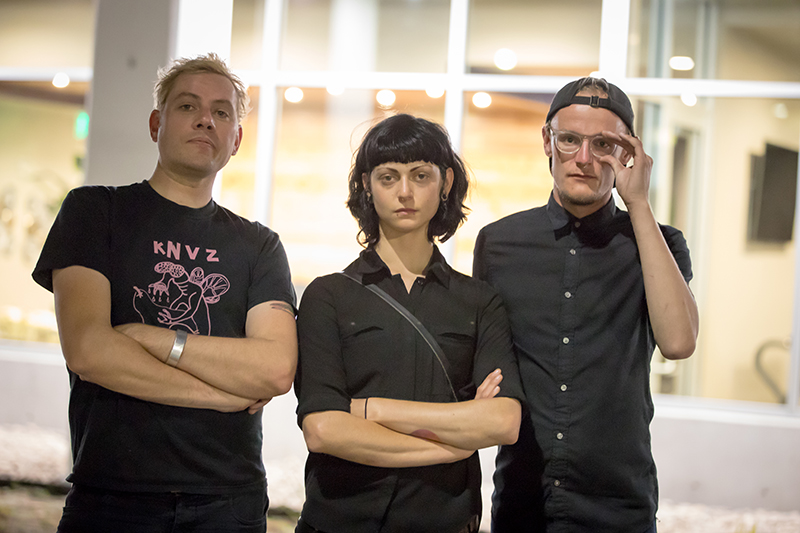 Sometimes music is a lot of fun, and sometimes it’s more than that. Sometimes music is a necessary catharsis that carries you through a rough day, month or year. No strangers to this phenomenon are this month’s Localized performers: Hoofless, Sympathy Pain and R. Candall Lark all make powerful music that brings some light to the listener’s life by purging all the darkness. Join us at Urban Lounge on Thursday, May 17 (doors at 8 p.m., show at 9), for the most emotional experimental music Salt Lake City has to offer. The free, 21-plus show is sponsored by High West Distillery, Uinta Brewing Co., Spilt Ink SLC and KRCL 90.9 FM.

Hoofless, the local trio consisting of Halee Jean, Michael Nebeker and David Payne, have come a long way. The group started as a one-off duo with Jean on cello and vocals and Nebeker on violin before adding Payne on drums. Though they had been longtime friends, Jean and Nebeker had never formally performed music together, since Jean had grown up playing in rock bands, while Nebeker comes from classical music. Rather than letting these elements conflict, they instantly melded into explosive yet refined music. “I think there’s a part of me being all, ‘Rock n’ roll!’ but there’s also Michael telling me, ‘There needs to be a system,’” says Jean. “I feel like I’m a wild wind and Michael is my tamer.” From the start, this idea that music is just as much about human relationships as it is about the music has dominated Hoofless’ approach.

While any number of groups are quick to boast about their “organic” music, Hoofless’ personal connections make their music feel especially natural. Many of Hoofless’ compositions are lengthy, highly repetitious endeavors that feature gigantic swells and huge contrasts in emotion. Nebeker compares some of their work to the adage that “If you boil a frog slowly, it’ll boil to death, but if you drop it in boiling water, it’ll jump out.” Jean continues that “it gets whipped up pretty quickly, but by then you’re already in the boiling water.” Truly, a Hoofless show can complicate your sense of time and place, and the tumultuous set can often turn meditative.

At the beginning of April, Hoofless released their first official studio album, Mouth Feel (hoofless.bandcamp.com). According to Jean, the album—in the broadest sense—is about “an emotional, sexual catharsis built around shame.” The four tracks (each roughly 10 minutes in length) feature the characteristic elements of Hoofless’ music: densely layered strings parts, splashy and intricate drums patterns, all topped by Jean’s unforgettable voice and surreal, evocative poetry. Even without knowing the specific impetus behind each song, the intense feeling of exposure and release is readily apparent.

This focus on direct emotions and expression is one of the many reasons Hoofless prefer live performance to their recorded work. Even though they praise Wes Johnson and his studio, Archive Recordings, for working with the group to best translate their live performance to record, they still question its medium. “In a show,” says Jean, “I’m allowed to be fully emotionally immersed, and that has a very different effect on the music.” To her, the record “felt wrong, and even violating, to the authenticity of live performance.” Rather than use their album as a definitive work of art, Mouth Feel is more of a gateway to their live shows.

On top of this emotional disconnect between live and recorded music, another benefit of live performance is the fact that no Hoofless composition is precisely the same each time it’s performed. While the “skeleton,” as Nebeker calls it, of Jean’s looped cello lines is a constant, what happens on top of and in conjunction with this is often determined in the moment. The environment, their current mood and their own musical communication guide the pieces. At the beginning of each night, the group decides what’s about to happen by asking themselves, “What are we going for here?” says Nebeker. “Are we going to play soft and delicate, or are we going to try to knock their socks off?’” Sometimes Hoofless are a harmonious chamber ensemble; other times they construct crushing layers of sound that fill every corner of a room.

Overall, Hoofless’ music is about creating a space for vulnerability—a word that the trio references frequently—not only in the sense of allowing individuals to express their inner struggles but with an added focus on artists working in and around Salt Lake City. While the trio sees no shortage of talented, motivated performers and creators, Payne is quick to stipulate that “Individuals are not the same as infrastructure,” and the community has work to do in order to create spaces that provide stigma-free opportunities for performance. “I really think it takes a whole community,” says Jean. “It takes everyone to put their two cents in.” On top of Jazz Jaguars’ biweekly showcase for local artists and musicians at Twilite Lounge (hosted by Payne), the group cites Diabolical Records’ head Adam Tye—whom they call “the patron saint of local music”—as helping this cause. “Without him, the music scene would be nonexistent,” says Jean, noting that many groups, Hoofless included, wouldn’t be where they are today without his support and promotion.

In keeping with this community-focused mindset, Hoofless are far from the only thing each member is involved in. Payne and Jean are members of Red Bennies and Jazz Jaguars, while Nebeker still keeps up his work with classical music, performing with the Salt Lake Symphony as well as with his own Spectrum String Quartet—he’s also currently opening his own violin studio (saltlakeviolinlessons.com). All things accounted for, Hoofless are just one of the manifestations of the art that Jean, Nebeker and Payne aim to create. “My biggest takeaway from playing with Hoofless is that you are enough, that there is room for you here,” says Nebeker. More than just through their inspiring, forward-thinking music, Hoofless embody—as artists, as community members and people—the great possibilities for Salt Lake’s music and art.