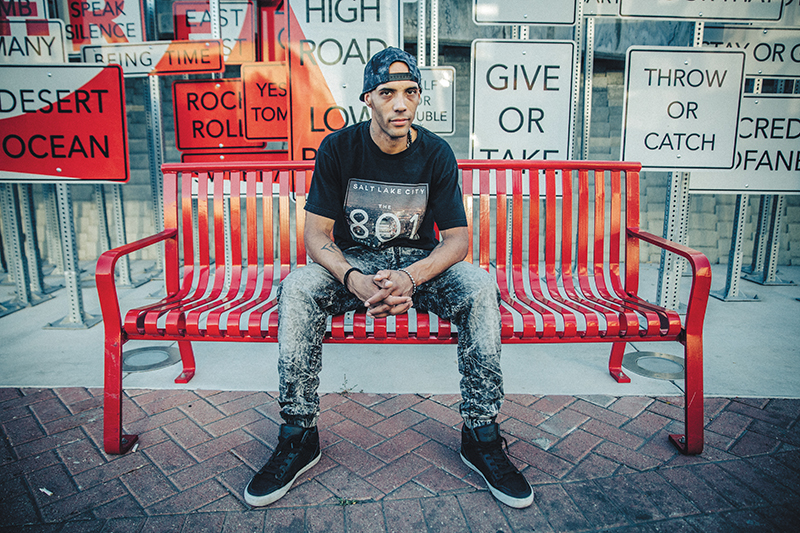 SLUG’s October Localized show will start snow season with three emcees known for songs laced with chilling content and lyrical skill. First up is the Battle Axe Warrior G-Life, followed by Kaotic the Verbal Assassin and then the Poet of the Proletariat. This series has been brought to you by our benevolent sponsors at Uinta Brewing, KRCL 90.9 FM, Spilt Ink SLC and High West Distillery. You don’t need to buy tickets—as always, Localized is a free show, open to patrons 21 years of age and older.

You can practice many skills as a rap artist. You can tidy up sloppy bars. You can improve timing and punchlines. You can even hire a vocal coach to help you work on pitch and tone. It only goes so far, however—the voice you were given is the one you are stuck with. Q-Tip will never be able to fool you into thinking he’s Rick Ross. A captivating voice is a gift, and that’s what you will come to remember about Kaotic, the rapper—among other things.

He invited me over to his Millcreek apartment, and the first thing I noticed is that his dwelling was meticulously neat—the type of clean that makes your mother smile or your drill sergeant say, “Atta boy.” He talked to me about things like his love for Star Wars as we settled in for an interview about the two things that make him who he is: music and family. One of the most remarkable things about Kaotic (aka Randy Scott) is that he comes from a storied musical background with roots to the very first African-Americans who set up shop in Utah.

“I am what it is,” says Kaotic. “I’m a half-black, half-white dude from Kearns.” According to him, Green Flake was his great-great grandfather. Story has it that Green Flake, Oscar Crosby and Hark Lay were with the Mormon pioneers when they claimed the land we now know as the Beehive State. “That’s the reason why I haven’t left Utah,” says Kaotic. “I’ve been to a lot of places, and they don’t move like we do here.”

His stage name came from his mother. “It’s because my mom said that whenever I came in the house, the phone started ringing and everything just goes crazy … it’s always chaos,” he says. Music and breakdancing were outlets for a young man who felt alienated and was struggling with defining himself. “I went into this phase where I made so many enemies in my hometown … that I end up losing my friends, and I end up in a lonely place, and that’s when I started rapping,” Kaotic says. It took him a while to develop into the man you’ll see onstage Oct. 18 at Urban Lounge.

Musically, Kaotic is settled into a production phase that’s along the lines of Forest Hills Drive with his July release, B.A.R.S. (or Beauty Around Randy Scott): a tribute to the bond he shared with a man he did not always understand or hold in high regard-—his father. “He toured with Parliament. He’s performed next to Marvin Gaye. He performed in Elizabeth Taylor’s mansion for Sonny and Cher’s anniversary,” says Kaotic. “I mean, [my dad] has been around. My grandpa, he was a jazz musician also.” Even though he speaks about his elders with great respect and reverence, the underlying sentiment was that things weren’t always like a Cosby Show episode. “[I used to hear people say], ‘Oh, you’re Randy Scott … Randy Scott’s son? Your dad was a bad man, man,’” says Kaotic. “I always thought he didn’t give a fuck about nobody—he really cared about a lot of people, so I had to do [B.A.R.S.] for him.”

On June 1, 2015, Randy Scott Sr. passed away at his family home. He was 65 years old. Maybe it was time, maturity or the recorded messages he left his son on an old cell phone, but something sparked Kaotic to look at his father in a new light. The time they spent together bonding over music and life may have led to a switch in perspective that led to compelling rhymes, reflective skits and passionate content that encapsulated fresh feelings regarding a relationship that spanned more than three decades.

Don’t expect Kaotic to stay in one lane for too long, though, as he’s always working with new flows and beat makers to satiate his passion for making music. He doesn’t stray from things like representing Royal Purp Ent. or his manager, Milk, recording songs with LAM of Self Expression Music, and using similes and metaphors in content that stays closely knit to Utah themes and experiences. Those remain constant in a world of flux.

The beauty about someone who has truly been in the streets and has learned from self-inflicted hard times and unforeseen trauma is that they tend to assist the younger generation in an effort to mentor them and keep them from repeating their mistakes—or maybe just offer words of encouragement. It’s a form of authenticity that you can’t fake. You see that with Kaotic and the performers he’s worked with. From Utah veterans such as Ya Boy Pell to up-and-comers like Dennis James and A-G-E, he’s earned the ears and respect of his peers, from the old-school heads to the new-school kids.

“I’ve brushed shoulders with a lot of hip-hop greats, from Supernat to Wu-Tang to KRS-One,” says Kaotic. “If you’re really with the culture, you gotta be with the culture. Stay tuned … keep your ears open, because I’m working.”

After several deterrents, it seems as if Kaotic is ready to embody his rap moniker in an artistic sense and leave the chaos in the streets. Catch his newest visuals for “X” and “Winter Cold” on YouTube before coming to Urban Lounge for Localized. You can follow his past, present and future movements online at facebook.com/kaotic.va.