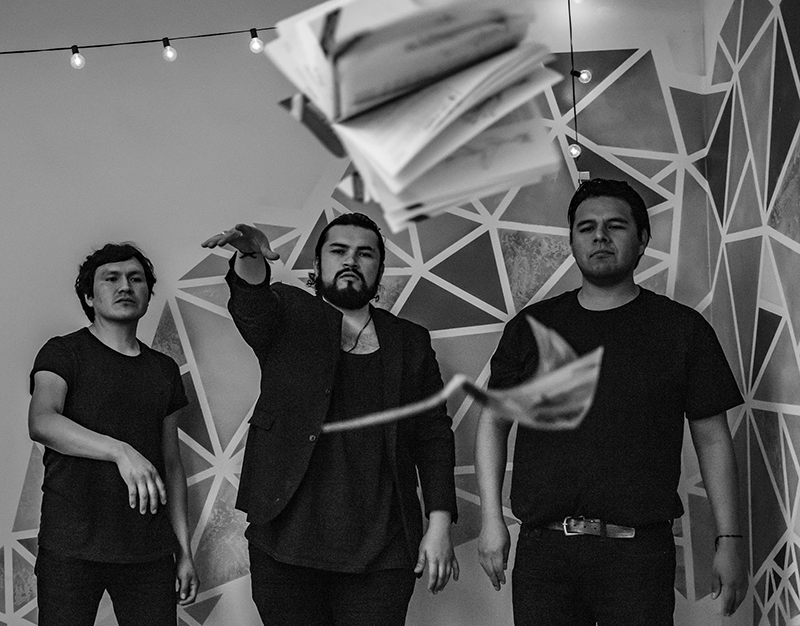 It’s time for another SLUG Localized, and this round, we’ve got head-banging rock, psychedelic wanderings and a heap of guitar pedals all set and ready to please your earholes. Co-headliners Mortigi Tempo—rock renegades with a sizeable discography—and Lord Vox—mystic rock shamans with pulsating groove—will join opener Sunsleeper to crank things up over at Urban Lounge on Aug. 23, doors at 8 p.m., show at 9 p.m. As always, this is a free show, 21 and over, and a special thanks goes to our sponsors: High West Distillery, Uinta Brewing, KRCL 90.9FM and Spilt Ink SLC.

I wasn’t sure what to expect out of self-described “mystical rock” kings Lord Vox as I entered their practice space. This turned out to be a good thing because any expectations I might have had would have been blown away, as guitarist/vocalist Nahum Reyes, bassist
Allan Orellana and drummer Fernando Garcia kicked on the amps and blasted me away with their savory rock n’ roll. With an incense stick burning conspicuously in the background and the room full with a stringy, lustful, ephemeral jam, I began to understand just exactly what made Lord Vox a mystical force to be reckoned with. “It’s very spiritual,” says Reyes. “[Our songs] are very profound, at least to me … a lot of the themes of the songs are mystical in a way: light and dark, and how one cannot exist without the other.” Whatever it is, it’s killin’—thick bass lines, washy guitar riffs and straight-to-the-point drum grooves create a euphoric atmosphere that I’m eager to dive into again and again.

Once I had witnessed the might of Lord Vox, I couldn’t believe that they didn’t have an album out yet. The band has released one single, “Beautiful Mountain,” which pays homage to the beautiful mountains around Salt Lake with an intoxicating pulse and whimsical guitar strumming. Unfortunately, Lord Vox have had a hard time recording. “It’s difficult to find a [studio] that understands your music and your sound,” says Orellana, who—when he’s not slaying bass lines or shredding guitar chords—is an ironically soft-spoken dude. “Because we gig so much,” says Reyes, “we just practice to sound really good live … We want to find our sound, and we want to refine it, but also, I feel like the experience of rock is that you’ve got to see it live.” That said, I was happy to hear that Lord Vox are planning to be in the recording studio this month with an EP or an album out not too far down the road.

If you’re like me, then one of the first things you’ll notice about Lord Vox is how cool their logo is. Reyes is a visual designer by trade, and he put his skills to good use designing the band’s signature graphic. “[There’s] a threefold meaning to that logo,” he says. “It looks like swords fighting because I feel like we’re warriors of light … It [also] looks like crosses upside down, not because we’re anti-Christianity at all … It’s more like what the cross represents—to me—is like colonialism and authority … And then, the third meaning, if you see there, there are three X’s because lust, man, sex. I think sex drives mankind.”

The cornerstone of Lord Vox’s sound is the connection and the cooperation between each of the band members. Each song they play is like a jam session that just goes exactly right at every turn. Two years ago, a chance encounter brought the three together in a session that was fated to begin Lord Vox.  “The first day that we jammed out, we got two or three songs like, down,” says Reyes. “It was just instant.” Garcia elaborates by saying, “It was pretty smooth—all of the songs feel right!” The entire band agrees that they share a tight bond. Reyes describes it best by saying, “We’ve had plenty of those [nights] getting drunk enough to start crying and hugging each other. So, I guess that’s pretty tight. We cry, we laugh and we jam out.”

Honestly, I have nothing but praise for Lord Vox. They immediately made me feel like part of the gang when we sat down for the interview—and their live music is definitely on par with many and much larger bands that I’ve had the pleasure of hearing. Reyes describes his feelings by saying, “Nobody is a prophet in their own land. When it’s so available, its like, ‘Oh, there’s this local band,’ and it’s like, ‘Eh, maybe, maybe not …’ but if we were to play the same shit anywhere else in the country, or the world, people would be like, ‘Holy shit!’” It’s a sentiment that I couldn’t agree more with, and Garcia sums it up best, shouting, “Support local music!”

Lord Vox have an incredible sound that I can only describe as a heavier version of something between My Morning Jacket and The Growlers. It’s a rich, warm, stringy, washy rollercoaster that takes turn after turn and spits me out at the end of each song, dazed as I recover from the ride. “I almost like it when we’re done with a song and … there are no claps because everyone is just taken aback. They’re like, ‘Oh shit!’ You know?’” says Reyes. After finishing a couple of Lord Vox songs (lordvox.com), I certainly felt like I did know as I scratched at the goosebumps forming on the back of my neck. The band has a phenomenal presence when they play, and I have no doubt they’ll be jamming Urban Lounge with their sultry sound on Aug. 23 for SLUG Localized!