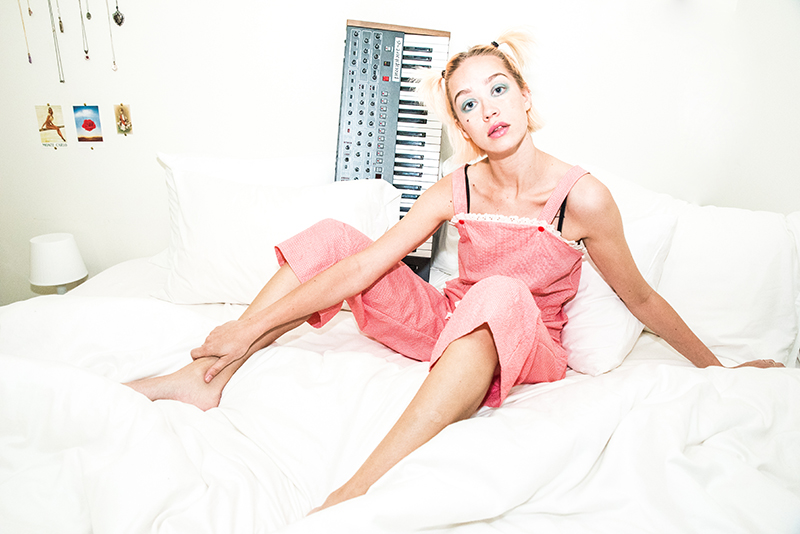 Hot, late August nights are the perfect time for shows that buzz with energy, and that’s exactly what will be delivered when Madge’s electric noise-pop joins the surfy, summery garage rock of Peach Dream and openers Dream Slut. Needless to say, this will be one dreamy Localized, so come bask in the haze at Urban Lounge on Aug. 16. The show is 21-plus and free, thanks to our sponsors: Uinta Brewing, High West Distillery, KRCL 90.9 FM and Spilt Ink SLC. In the opening of her single “Red James,” Madge, aka Cat Leavy, sings in a multiplicitous, weevily voice, “I’m Madge, with the broomstick,” before blasting off into a track that is driven by conflicting, layered beats and fuzzily bouncing synths, which convey the attitude of a pop song while dodging just around it with something more warped than pure pop. Anyone familiar with the work of Provo’s New Shack knows that Leavy can weave a dreampop soundscape, and “Red James” indicates that her new project, Madge, will only prove this to be more true. It is not only this experience that has helped Madge come into existence, but that broomstick, too.

While Leavy describes her work in New Shack as pure, she says that Madge stems from and exposes a place of rawness. Leavy says, “In Celtic mythology, there’s the goddess Maeve, the goddess of madness and creativity, and in modern folktales, she has become this witchy hag, this mischief-maker named Madge. I read about that years ago and kind of clung to it. [Madge] is the part of me that is angry and not necessarily well-spoken or refined.” These descriptors come across pretty easily in “Red James,” not just because of Leavy’s wild vocals and lyrics, but because of its spur-of-the-moment creation and personal style. The song started off as an experiment in Bone Shack Studio (which Leavy runs with her partner, Christopher Bennion), where Leavy layered tracks until she got the final product. Of this production and its resulting sound, Leavy says, “I’m drawn to very hard-hitting beats, and in my studio, I work mostly with analog synths. I love the way they sound and the vintage idiosyncrasies that you get, the grittiness and sloppiness that come from vintage and analog gear. I like poly-rhythm, combining time signatures, and if you listen to ‘Red James,’ you hear tons of beats coming in at different places. I think that when I make music, it references what I’m feeling in the moment.” It’s always impressive to think about how for some people, like Leavy, expressing oneself in the moment means sitting down in a studio and not only laying down tracks but producing it all, too. Leavy mixed and recorded the whole thing herself, engineering everything. This skill stems from the combination of being exposed to the producing techniques of Bennion and New Shack’s other half, Eric Robertson, as well as being self-taught. Starting off by messing around on Garageband years ago, Leavy has, for the past year, learned about audio engineering from Women’s Audio Mission’s Sound Channel, a program that provides interactive textbook information on the subject. Given this commitment and the fact that Leavy has a master’s degree in Performance Studies, her life seems to revolve around music and learning more about it.

Having this expertise and hunger to learn is what helped Leavy start Madge. “I think this project has been in my brain for a long time,” she says, “and recently, I’ve had the tools and the skills to realize it.” Leavy’s production skills and the birth of Madge seem to go hand in hand, especially since Madge is also representative of how far Leavy has come with those skills. Leavy says of the project, “I think I do kind of get the gratification of having complete ownership of something, and also doing something that is letting people know a different side of me. I love the New Shack persona and the imagery there—I think it’s very cool, but I think Madge is a little grittier, and I’m a lot more self-conscious about it. It feels good to have this part of me exposed.”

Leavy’s studio work exposes something else, too, and pushes back against it: the lack of women-identifying and nonbinary people in the world of music production. While Leavy loves her male-identifying studio friends, she still notes, “I just realized early on how insecure it made me feel to be around these people. I’m a pretty strong, forward, confident person, and this weird side of me comes out when I’m working with men where I become very deferential and second-guess myself … but truthfully, I’m very smart, I’m very capable. I’ve learned all this very quickly.” It’s hard not to think of Grimes, who, after finishing her fourth album, Art Angels, posted a picture of her album’s details, where she was listed as engineer. In a way, “Red James” feels like that sort of receipt: proof of Leavy’s work, experience and strong creativity.

On July 29, Leavy will release Fight or Flight Club. The EP will vary in melodic and dreamy territories as well as more noise-driven ones. Wherever it goes, though, what will doubtlessly come across is Leavy’s skill, the experience it conveys and why it matters.