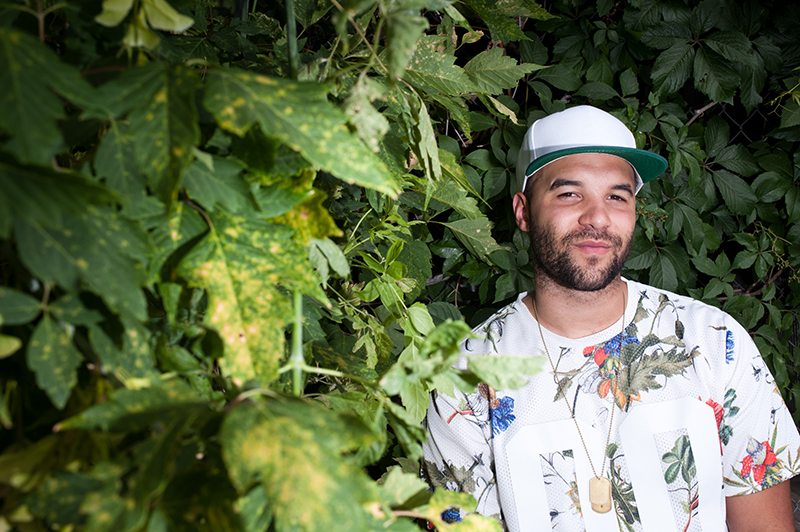 Feel-good indie rock and hip-hop are going to be filling the Urban Lounge as they once again host some of the Beehive State’s finest musicians for Localized, brought to you by Uinta Brewing Co., KRCL 90.9 FM and Spilt Ink SLC. The event will be held Aug. 20 at 8 p.m., and with the affordable admission price of FREE, you’d be doing yourself an injustice by missing out. VanLadyLove kick off the night with their toe-tapping, high-energy sound, followed by Static Waves, whose addictive guitar riffs and moody backbeats will keep the party moving. Finally, the show will be taken over by Mimi Knowles, who will bring down the house with his refreshing mixture of intelligent lyrics and spirited beats. Check out Facebook for more info.

Mimi Knowles is smiling ear to ear from the moment he walks up to the SLUG office. He introduces himself to me and then continues to talk to everyone in the front room as if he has known them his entire life. Knowles’ outgoing personality extends past his music, letting the entire room feel his presence.

Knowles first noticed the influence of music in his life at a young age. “My dad always had Motown playing in the house, and so I first started hearing Jackson 5 and Stevie Wonder,” he says. “That’s when I was really young, like 5 or 6, and I was like, ‘Music is pretty dope.’” At the age of 15, Knowles received his first guitar and started writing songs. His first song, “Superheroes are Afraid Too,” was written to help overcome his fear of hanging out with girls. The confidence that can be heard through his music and performance easily shows the growth that Knowles has gone through over the years.

Since then, Knowles has learned how to play guitar, piano, bass and ukulele, and has worked his way up through Provo’s music scene. Making a name for himself wasn’t easy, though, as hip-hop in Provo didn’t really have an audience. “The Provo scene, when I first started hitting it, was just folk—like indie rock/folk,” he says. “If you weren’t that, you weren’t playing.” Knowles even initially tried to write folk songs to gain attention in Provo. “After winning a few Battle of the Bands and songwriter showdowns, people started to take me seriously and labeled me as a soul hip-hop artist.”

Despite his lighthearted and laid-back personality, Knowles’ style of hip-hop is something that deserves respect. His lyrics show range, telling stories of life and growth, and he’s also carefree enough to spit a few bars. Knowles’ mixture of familiar beats and witty lyrics sound like a greatest hits of modern hip-hop and pop music—he can take a sample you’ve heard over and over and bring it new life.

When it comes to his writing process, Knowles’ starting point varies depending on what he is being inspired by. “I think there [are] three primary ways to write a song—starting with melody, starting with a chord progression or with lyrics. I’ve done all three—it just depends on the moment.” Knowles is always brainstorming when it comes to his music. “The best song comes when inspiration hits, and I have to stop what I am doing,” he says. “I try to put myself in situations where I can get inspired.” Mimi Knowles finds influence from artists like Drake, Mark Ronson, John Mayer and Kanye West, and describes his own style as pop/funk/soul.

Knowles is a true artist in that he uses his talents to inspire those around him and to better the people he comes in contact with. He has a message for everyone who’s getting into music: “Stay true to yourself,” he says. “Find a passion, be passionate about it, but don’t forget about the people who got you there.” When asked about the legacy he wanted to leave behind with his music, authenticity remained a constant theme. “Make sure you’re authentic as you’re coming up,” he says. “I want people to say, ‘Mimi was the same guy onstage as he was when he was sitting down with me.’”

Knowles isn’t a one-trick pony by any means—when he isn’t writing music or performing, he is working on his clothing company, Mimik Clothing. After a short break, the company has revamped for a summer line. Knowles’ inspiration comes from being in fourth grade and wanting to push style ahead of the curve and wear something unique. As for the future, Knowles is working on a cover of Taylor Swift’s “Bad Blood” with Nashville-based musician Jessica Frech. He is constantly touring around the local area, as well as occasionally stopping in the northeastern United States.

Utah’s hip-hop scene is growing, and Mimi Knowles is hoping that Localized will help him branch out and break into Salt Lake City’s scene more. He has played shows all over the city but has yet to perform with SLUG. An artist this upbeat and positive with his music and performances will surely bring good vibes to Urban Lounge. You can follow Mimi Knowles and everything he is doing at his website, mimiknowles.com.