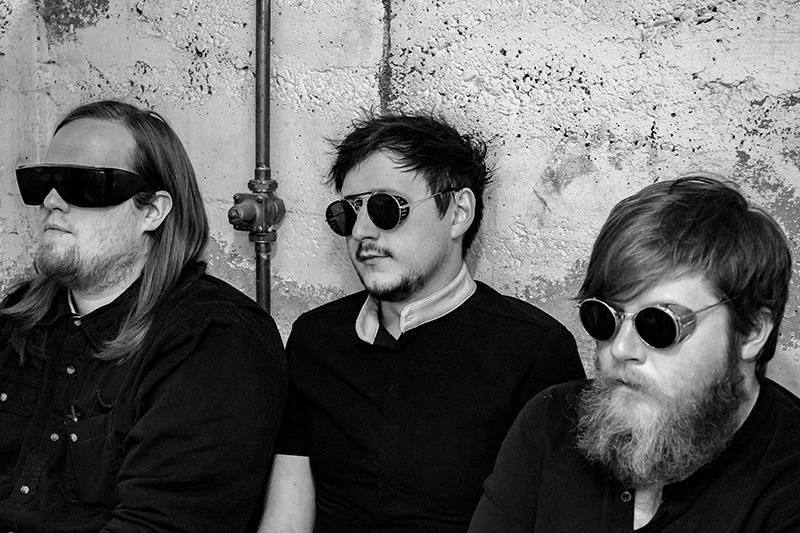 It’s time for another SLUG Localized, and this round, we’ve got head-banging rock, psychedelic wanderings and a heap of guitar pedals all set and ready to please your earholes. Co-headliners Mortigi Tempo—rock renegades with a sizeable discography—and Lord Vox—mystic rock shamans with pulsating groove—will join opener Sunsleeper to crank things up over at Urban Lounge on Aug. 23, doors at 8 p.m., show at 9 p.m. As always, this is a free show, 21 and over, and a special thanks goes to our sponsors: High West Distillery, Uinta Brewing, KRCL 90.9FM and Spilt Ink SLC.

It’s always good to see musicians who care about the quality of their sound. That’s why it was so great to crouch my way down into the basement where guitarist/vocalist Chris Fallo, percussionist Marc Leach and bassist/guitarist/keyboardist/vocalist Nicholas Allen like to practice and record their jams. “I did max out a couple credit cards to get a decent sound out of this,” says Fallo, pointing at walls piled high with audio cables, guitar pedals, instruments and speakers. “It gets pretty loud down here”—a fact that became abundantly clear when the band fired up all their gear to give me a little taste of their live sound. Fortunately, Mortigi Tempo excel at loud music, and their style definitely benefits from being able to turn all the way up to 11 for those chaotic, fuzzy riffs that they like to throw into most songs.

Head-pounding riffs, abrupt, rhythmic kicks and a shitload of sound effects are the core of what makes Mortigi Tempo so good. The other thing that makes the band is the amount of effort they put in behind the scenes: fine-tuning audio effects and sound quality. I’m constantly surprised by the synthy effects, trippy panning and antique samples that are sprinkled throughout their albums. “We like to take [our albums] and make it more of an adventure album,” says Allen, “where it starts off, but then, in between every song, there’s noises and other things going on.” Put simply, Mortigi Tempo want to remind us all to listen to albums, not just songs.

If you head on over to the Mortigi Tempo’s Bandcamp (mortigitempoband.bandcamp.com), you’ll probably notice some fairly gnarly imagery scattered over a lot of it. Creepy shit—dolls hanging from Christmas lights, phallic hot dogs, a healthy dose of the uncanny valley—is all just part of the band’s style, and perhaps even part of its allure. “[Our music] should either make you want to fuck or fight,” says Fallo. The band explores this concept in their music video for “Feelin’ You,” which features a raging house party that takes a turn for the worse—becoming a gory, ritualistic sacrifice scene as the song descends into chaos.  “I’m sick of things being pretty all the time,” says Fallo. “I think everyone is too afraid that if they do the wrong thing, or present the wrong imagery, that they’re going to turn people away … and those are the people who I don’t really want to attract to our music.”

It’s rare to see a local band with as many albums under their belt as Mortigi Tempo, and rarer still to see that each album in a band’s repertoire receives so much thought. Each time the band begins work on a new release, they have a clear direction with their sound. “The original idea was that we were gonna do concept EPs,” says Fallo. “[Memento Mori] was supposed to be our psychedelic Spaghetti Western concept EP … We always start out as writing EPs, and then it always turns into full-lengths. We can’t really help it … We gave up on trying to write, like, normal albums. It’s just not fun.” If you’re wondering what constitutes a “normal” album, Fallo sums it up in one word: “Weezer.” What’s their advice for all of you out there trying to put together your first album? “Find a real weirdo who lives in a shed with a bunch of nice equipment,” says Fallo, “[someone] who is down to let [you] experiment with things for a long time. I think our first one took us eight or nine months.”

Just to make things a little spicier, Mortigi Tempo will be releasing their third full-length album on the same night as Localized! Spread the Disease will showcase the grungier side of the band, thick with bass fuzz and crunchy rhythms. “This is like our greatest-hits compilation,” says Fallo, and the whole band laughs. “This is what we actually sound like.” After losing their de facto bassist during the recording of Memento Mori, Mortigi Tempo have settled on new sounds and styles that work with their three-piece setup. “We’re stoked to be releasing something that we’re going to want to play at every show,” says Allen.

From hardcore head bangers to stringy psychedelic licks and sound effects, Mortigi Tempo explore sonic territories hitherto uncharted. The band has a knack for getting loud, changing things up with tight rhythmic kicks and, most of all, just having a good time. I recommend bringing some earplugs to Localized on Aug. 23, because it’s going to get heavy when these guys kick on the overdrive and attempt to blow the roof off with their riff-heavy rock.