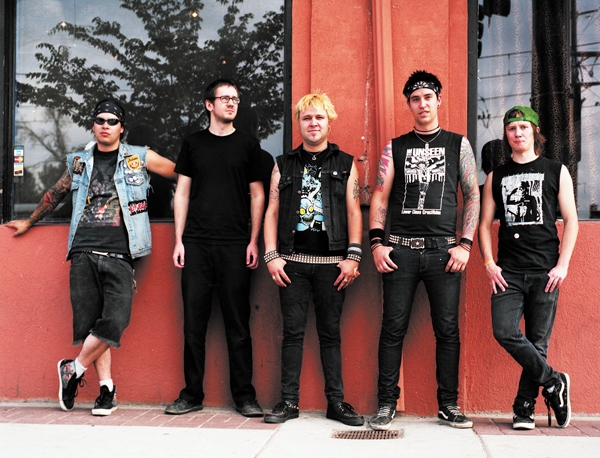 Negative Charge formed in the summer of 2004 in the back room of Tay’s mom’s house. ”It was just us getting drunk, and we decided that Salt Lake needed a good punk band,” Tay says. Since that summer, the band has gone through five drummers and four bassists. Their current lineup has been in place for about a year. The band’s combined track record reads like a who’s who of the SLC punk scene. Before joining Negative Charge members of the band spent time in The Fictions, Le Frey, The Dregs, Endless Struggle, The Willkills and many others. The band released their first and only full-length album in March 2008.

Over the years I’ve seen Negative Charge at numerous gigs. They’ve played house parties, a strip club in Ogden, In the Venue, other all-ages venues that have come and gone and mainstay dive bars like Burt’s Tiki Lounge and the Double Down in Las Vegas. Once while on tour in California, they even performed on a boat.

The list of legendary punk bands that they’ve opened for is much too long for anyone to remember. This summer alone they have shared the stage with The Germs, Vice Squad, Lower Class Brats and The Briggs––often outperforming and expelling more energy than the national acts that they open for. Like many punk bands, the real power of the music is found in their live performance. Brock describes their shows as being “4/5 energetic,” because, according to Mikey T: “Preston likes to hide behind stuff.”

The description is spot on. In June, when the band opened for Vice Squad, Nick, Tay and Brock took center stage and never stopped screaming their faces off. Although Mikey T was shoved behind a drum set at the back of the stage, his metal-influenced double-bass drum beats seemed to propel the energy of the crowd into the other band members. Preston hung off to the side of the stage, but if one of the members didn’t keep things mellow, the band might implode. Negative Charge relentlessly assaulted the crowd with their version of hardcore-infused street punk for half an hour.

Unsurprisingly, during the first part of the summer, the band was playing almost every week. “We haven’t unloaded our van for a month,” Nick said in June as their onslaught of live shows neared its end. “We would much rather go on tour than play Salt Lake all the time,” Tay says, “We love Salt Lake, we love playing here, but we like to keep it fresh.”

Although the band doesn’t currently have any regional tours planned, they’re hoping to do some weekend warrior dates soon––hitting two or three cities near Salt Lake City in two or three days. They also have a date booked at the Double Down in Las Vegas on Aug. 22. Last summer when they played the quirky punk rock bar, they went on at 3 a.m. and were dubbed “Negative Trainwreck” after a night of excessive drinking on the strip. According to Nick, the five-member band was playing six different songs.

Dubbed was also playing the Double Down that night and witnessed the appearance of “Negative Trainwreck.” “We play with them all the time. When they get so drunk they can’t play its funny to us,” Nick Skunk says. “They’ve seen us do the same thing. It’s funny to see your friends turn into a god-awful mess.”

Dubbed’s bass player, Mike the Bass, summed up the show with a single comparison. “Nick Charge was channeling Elvis,” he says.

Negative Charge assured me that they would try to hold back the Negative Trainwreck for the Localized show. And for their upcoming show at the Double Down… “Hopefully we’ll get a better spot. Go on at 1 [a.m.],” Nick says. 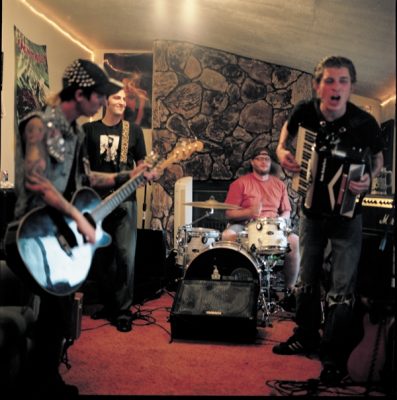 “Our band is held together with drugs and alcohol,” Nick Skunk says as he drinks a PBR.
Dubbed started nearly a decade ago when Nick Skunk was still in high school. “Nick used a fake ID. We learned how to play in front of people. You had to be drunk to endure such humiliating circumstances,” Mike says.

In those days the band was a three-piece that mostly played Sublime cover songs. Luckily, they ditched the Bradley Nowell worship and, as Nick Skunk describes it, “got good.”
“We moved away from some of the reggae stuff and we started to get really fucking angry and fast,” Mike says, “We played everything really fast.”

Ecks joined the band on his saxophone two years ago on Valentines Day and calmed the band’s style down a bit. “We did a reggae dub and wanted a horn section to give it more balls.” Nick Skunk says, “We had him do it live a few times and then told him he had to be in the band.” Brettley joined the band on drums last April.

The current lineup is what makes Dubbed a band that can jump from Bad Brains-style punk anthems like “Shut Yer Mouth,” to ska songs like “Gamblin’” and “Stone Dead” and even the occasional country song. “I think that’s the one thing we really have going for us and against us. None of our songs sound the same,” Ecks says, “People really don’t know how to wrap their heads around us when they see us live.”

The band credits their musical schizophrenia to the boredom that comes from playing one style of music over and over again and to their “musical ADD.”

This past summer, Dubbed took a break from playing live to focus on recording with their new lineup. The band is recording their upcoming album in true DIY style: using an old Apple computer, logic pro and whatever cheap condenser mics the band can get their hands on. The recording space doubles as the band’s practice space and is located in the backroom of Ecks and Nick Skunk’s house. “We’re trying to follow the Gaza paradigm. They did it right. They put out a really good EP that they just put their full fucking effort into. Then they gigged on weekends, four or five day tours and played to kids in smaller cities,” Ecks says. “Kids in smaller cities actually appreciate music.”

Dubbed is planning to release their album by August or September. Although there are no solid tour dates in the works for the band, there is talk of an upcoming east-coast tour and the ever-popular weekend warrior schedule. To finance the time on the road… “[We’ll] pray to Joe Pesci that people buy our merch so we can make it to the next town,” Nick Skunk says.

As far as their Localized performance with Negative Charge goes, they’re confident that it will be a boozy affair. “I can say one thing, we can sell beer,” Ecks says. They also seem genuinely excited to play. “We’re gonna bust our asses. I’m going to play until my fingers bleed a bit and we’re gonna put on a good show,” Mike says. The bloody finger bit apparently isn’t bullshit either. “He has to put super glue on his fingers every time he plays or they bleed profusely,” Ecks says.

Come check out Dubbed, Negative Charge and openers Desolate at Urban Lounge on Friday, August 14. Five bucks gets you in.