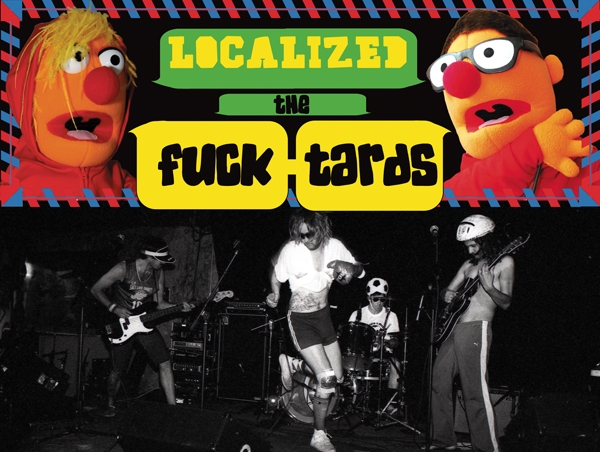 The final Localized of 2009 promises to be one for the ages. Get ready for the Christ-punching punk rock of The Fucktards and the deranged deviance of Heathen Ass Worship as they take the stage of The Urban Lounge on Friday, December 18 with openers Breaux. Five bucks gets you in, but nothing will ever get you out.

The prospect of interviewing Mike Brown intimidated me. This is exactly why the SLUG higher-ups made me do it. When Mike proposed that we conduct the interview in a sketchy gay bar, it didn’t exactly alleviate any of my fears. My mind was flooded with visions of myself being abandoned, either accidentally or on purpose, in a world I know nothing about and left to fend for myself in ways I never could’ve imagined. Luckily for everyone involved, the idea was dropped (or forgotten) and I interviewed Mike on the back porch at the SLUG HQ. Based on the content of Mike Brown’s monthly column, the hate mail and occasional threats of legal action caused by the column and the very name of The Fucktards, one might be surprised to learn that Mike Brown is very serious and very professional in everything he does—even if the things he does are intended to upset people.

The Fucktards accidentally formed ten years ago after Mike Brown overheard a group of his friends talking about forming a band. Mike mockingly suggested they call the band The Fucktards and let him be the singer, which is exactly what they did. The band quickly became infamous for their sloppy sound, unpredictable stage antics and tendency to ruin everyone’s good time. “When you’re like 21 to 24, before life kicks you in the balls, that attitude helps with the stage presence but it doesn’t help you get shows,” Mike said. The Fucktards quickly established themselves as a love ‘em or hate ‘em band, being banned from Kilby Court for their destructive tendencies while being praised by the staff of Todd’s for the exact same behavior. “We would break so much shit there,” Mike said, “There were times when I thought they would be mad but they were like, ‘That was awesome!’ I think that kinda sent us a bad message.”

The Fucktards broke up in 2003, but reformed earlier this year to play SLUG’s 20th anniversary party. Since then, they’ve been injecting a much-needed dose of fun into Salt Lake’s live music scene. “I’ve noticed with a lot of the bands in town that are hot right now, if you’ve seen ‘em once and you go to see them again it’s the same shit.” Mike said, “That’s what I think is one of the most awesome things about punk rock in general. You don’t necessarily have to change your set, but something different could happen at every show every time.” A Fucktards performance is more than a show: it’s a spectacle. Often coinciding with a Mike Brown Fest, during which the Urban Lounge becomes host to in-bar skateboarding and ping pong tournaments, the Fucktards’ live performances are less about the music and more about the experience. “We’re not one of these bands that practices every week, but I think that works to our favor,” Mike said.

Even though The Fucktards have once again become one of the most entertaining live bands in Salt Lake, they’re approaching things differently than they did in their younger days. Mike Brown is older and, despite what anyone else may tell you, wiser. He works in a bar and knows what’s expected of the bands who play there and just how much shit they can get away with. Even with this newfound professionalism, don’t expect a new Fucktards album anytime soon. “We recorded a CD a while ago and it was such a pain in the ass. It was such a fucking frustrating process and it wasn’t fun.” Mike said, “The only reason I wanted to be in a band was to have fun in the first place. The songs are so sloppy and basic punk rock metal that I don’t know how many people would actually wanna listen to it.”  The band also has no plans of playing any all-ages shows, but that’s probably for the best. “I think when people are drinking they don’t really care if you’re making fun of Jesus or singing, ‘I popped Mother Mary’s cherry.’” Mike said. “I’ve literally made girls cry and have seen people walk out when we start playing ‘Christ Punchers.’”

The Fucktards are back, and even if they’re a bit more professional and more willing to play by the rules in their current incarnation, they’re still the same old band. “People either really, really like us or really, really hate us and that’s how I want it to be,” Mike said. “We’re making fun of everything, including ourselves. The local scene now is so serious, I just want us to be that band that steps outside of that circle and shoots bullets through the scene. It doesn’t have to be all dramatic and political and stupid.”

Much like The Fucktards, the members of Heathen Ass Worship take their existence very seriously—but in a completely different way. I met up with the band in their practice space, which was littered with empty beer cans and hosted an aroma that truly can’t be described by the written word. The band was formed an indeterminate amount of time ago when, while on a road trip, Pastor Sasha and Dirty Melissa encountered Litterbox in a dumpster in Reno, Nevada. After their attempts to impregnate Litterbox failed, they decided to form a band in the name of Heathen Ass Worship and change not only the modern musical landscape, but the world itself.

When I asked the band to explain exactly what Heathen Ass Worship was, Sasha said, “It’s an ancient religion referred to in the book of Exodus. It has historically been practiced by people like the Marquis de Sade and involves indulging in every form of debauchery known to man and not drawing sexual lines or boundaries, ever.” “Consequently all of our songs refer to butt fucking at some point,” Melissa said. Sounds logical so far. The band’s primary purpose is to spread their gospel musically, visually and physically with the ultimate goal of unraveling the moral core of the universe and destroying it completely. So far, so good. “Have you seen the universe lately? It’s fucking falling apart and it’s all thanks to us,” Melissa said. “Disease, violence, pestilence, it’s all our fault,” said Sasha.

Undoubtedly, Salt Lake City’s local music scene has also felt the destructive force of Heathen Ass Worship. Before I could even finish asking the band about their thoughts on the current state of local music in Salt Lake, all three in unison said, “Fucking sucks.” “There’s like three good bands and everyone else sucks,” Sasha said. “It’s this return to this stupid, hippie bullshit that started in the 70s with all these stupid Eagles and Fleetwood Mac sounding bands. If I hear one more twangy guitar I’m gonna shit myself.” Based on everything I heard from Heathen Ass Worship and their philosophy, I’m sure shitting themselves is a suitably shocking activity that would not only reflect their own displeasure with local music, but also further their destructive doctrine. Like I said, these dudes (or possibly dudettes—I thought it would be impolite to inquire about their genders) are totally fucking serious.

When I told the members of Heathen Ass Worship that their band came highly recommended from Mike Brown, Sasha said, “We fucking hate Mike Brown so bad. We’re gonna blow them off the fucking stage.” “When other bands play with us, they have to nail 2x4s to their assholes because we’re a big fucking cum-loaded hurricane ready to blow ‘em off the fuckin’ stage,” Melissa said. The recorded music featured on the band’s Myspace page didn’t really lead me to this conclusion, but after meeting and talking to the band, this seems like an entirely plausible claim on Heathen Ass Worship’s part. “Every time we play, we’re trying to get the show shut down. We want to get the cops called and get arrested,” Sasha said. “We’re trying to get everyone to leave. If you’re not offended, there’s something wrong with us,” said Litterbox. “We’re like GG Allin. Except we have vaginas. And we rule.”

Despite their alleged and highly probable cosmic prevalence, information on Heathen Ass Worship was hard to come by on the Internet. I told the band that the few mentions I could find of them were usually negative. In response to this, Melissa said, “People who hate us probably got weiner-touched by their daddies when they were little and our songs remind of that.” “Or they weiner-touched their young retarded brother at some point and our shows make them uncomfortable,” Sasha said. Given the current state of the universe and how much it has deteriorated since Heathen Ass Worship’s formation, these claims also may be more likely than they seem. “The people who like our shows realize that life is short and if you don’t experience everything you can, you’re a fucking idiot,” Sasha said. “Plus, the people who like us aren’t afraid to fuck a chicken or two, and that’s important,” Melissa said.

The band has spent the last fifteen months running a lady-boy ranch in the Phllipines (seriously, ask them about it at the show), so Localized will be their first show in more than a year. When I asked the band what we could expect from their performance, Melissa said, “Heathen Ass Worship is more of a religious experience and not a band to be listened to. There will be plenty of cocks, balls and assholes at the show. That’s what makes the world go round.” Once more, for clarity: these guys are serious.