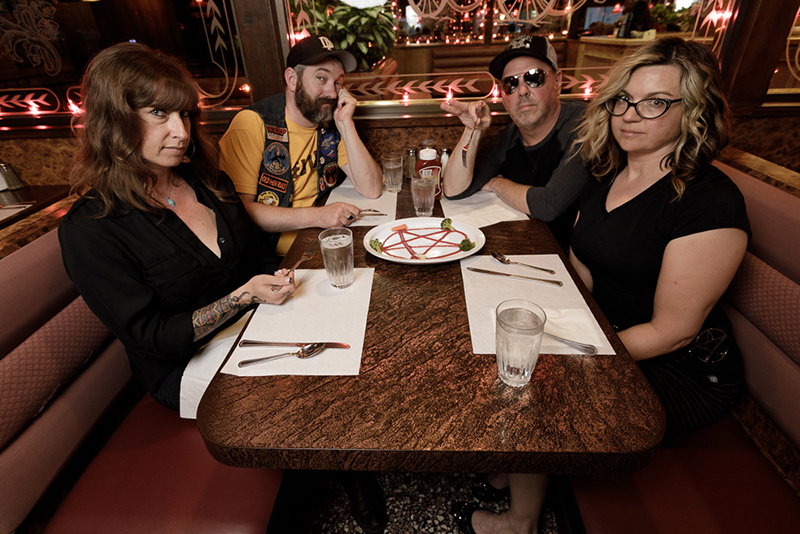 With the red-hot days of summer upon us, come to Localized, a free show to satisfy your thirst for rock n’ roll. Shecock and The Rock Princess, Magda-Vega and Galagher will turn up the gain, cranking out guitar solos and melting faces at Urban Lounge on July 19 (doors at 8 p.m., show at 9 p.m.). Get some reprieve from the summer heat with a cold one (show is 21-plus) with our sponsors: Uinta Brewing Co., High West Distillery, Spilt Ink SLC and KRCL 90.9FM.

Heavy, hyperaggressive rock n’ roll is the essence of Salt Lake–based Magda-Vega’s sound. Since 2013, ex–Wild Ones members guitarist Bill Frost and vocalist Robin Brown, with the help of guitarist-turned-bassist Angela Mize and drummer Mike Walton, have pulled from their different backgrounds to create a conglomeration of rock that borrows from many different genres to create a sound that is both infectious and substantial. Most Magda-Vega songs seem to be structured around Frost’s guitar riffs, setting the scene for Walton and Mize to support. “There are elements of garage rock, stoner metal, punk, doom and even straight-up ’70s cock-rock in what we do,” says Frost, who describes Magda-Vega’s sound as “loud, sexy and overrun with gratuitous guitar solos.” What results are songs ranging from the triumphs of Vikings in “Black Eagle” to being an unapologetic bitch in “Goodbye Kitty,” backed up by meaty guitar and sleazy, sexy rhythms.

While the instrumentalists of Magda-Vega offer a healthy mix of genres and talents, vocalist Brown definitely brings in an edge and personality that set Magda-Vega apart in Salt Lake City’s live-band circuit. Described in the band’s own bio as a “fiery hellcat,” Brown prefers to release her fury onstage and in recordings, choosing to opt for mysterious silence throughout the interview, giving her the air of an intimidating enigma. For Frost, having Brown as the frontwoman of Magda-Vega is one of their defining aspects: “She has her own style, she doesn’t hold back, and you damn well pay attention to her onstage.” With a raspy voice and a defiant attitude, this seems to hold true for Brown, whose cheeky, punk-inspired lyrics are as in-your-face as her intriguing and almost menacing persona.

With the medley of Brown’s prominent presence and the vigor of the instrumentals, it almost comes as no surprise that the recording sessions for Destroyer were basically live performances within themselves. “Each song was recorded live in a couple of takes, vocals and all,” says Frost. “The four of us played in the same room with no headphones, Iggy and the Stooges style, at Mike Sasich’s Man vs. Music studio.” Frost points out that many of their fans tend to find similarities between their live performances and recordings, which he takes as a compliment. For Magda-Vega, the songwriting and recording process is a shared effort, which helps the band proliferate in churning out the hits. “Usually, [Frost] comes up with a riff and we all build on that,” says Walton. “[Frost] would be the band leader, but he hardly ever tells us what to do or not to do. It’s a relaxed, collaborative atmosphere.” Since releasing Destroyer in 2017, Magda-Vega has started to work on new music, which will be performed at this month’s Localized.

Listening to their sophomore release, Destroyer, Frost’s guitar riffs create the tone for each song, while Mize sets up solid, supporting lines to connect Frost’s quick riffs to Walton’s drum fills, all while framing Brown’s brash and bold vocals. “I love all of our songs, to be honest,” Mize says. “Magda-Vega doesn’t have one type of sound. We dabble in different styles and tunings. I love playing in low tunings—low A is particularly cool.” Mize is referring to the tuning of the album’s title track, which Frost claims was written only days before the recording and had never been performed live at that point. With a definite Black Sabbath–esque feel to the slow-building, head-banging piece, “Destroyer” certainly makes sense as the title track, though “Smash and Grab” is credited as being the punchy piece with the most airtime on KRCL, where Walton also DJs for the Thursday-night Psych Out segment. For Walton, having such a fundamentally rock n’ roll sound fosters a sense of uniqueness for the band. “To me, the traditional sound of SLC bands is just weird, which I love,” he says. “But we’re kind of bucking that decades-long trend by just playing rock. My brother often says, ‘You guys are so not weird. Be weirder!’”

For those who haven’t experienced Magda-Vega live, whether at their favorite neighborhood spot, Big Willie’s, or at their album release at the Heavy Metal Shop (at which, Frost says, “We’d finally found a room we could pack—thanks Kevin [Kirk]!”), Frost promises “volume, bombast and [Mize] with great hair and a cute outfit—both of which she’s [currently] working on.” While Frost has been known to blow out an amp or two at Urban Lounge, his response to whether history will repeat itself for Localized is simply, “We’ll see.”

Magda-Vega’s Destroyer can be found on Spotify (the band’s goal is to surpass Kanye West in plays), and their full discography can be found at magdavegaslc.bandcamp.com. Be sure to catch Magda-Vega at this month’s Localized on July 19 at Urban Lounge.