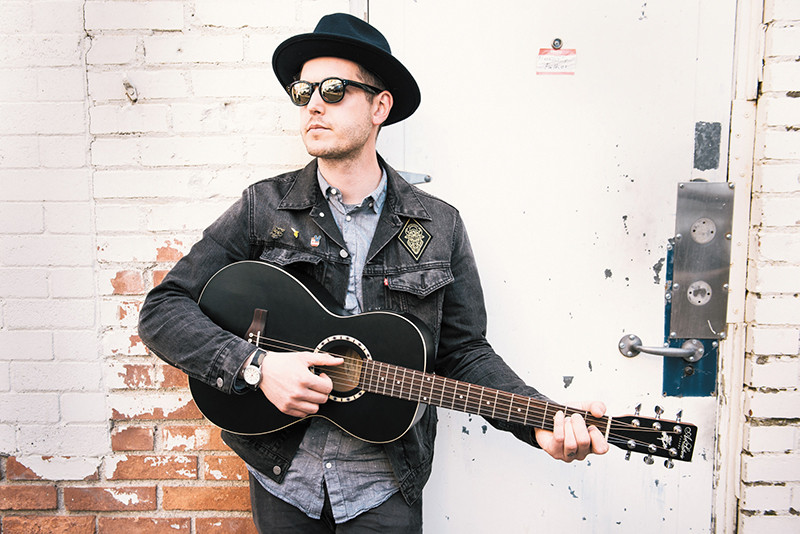 Magic Mint, the solo-project brainchild of local musician Andrew Shaw, might seem like an axiomatic extension of Shaw’s four-piece band, Color Animal, but it’s not. Self-described as “the marriage of looping and pop music,” Magic Mint presents a psych-pop sound that wavers tentatively somewhere between coldwave group Black Marble and indie-rock band Beach Fossils—with a few intentional nuances that give Magic Mint its euphorically retroactive sound. Magic Mint sounds like it should be a full band, not a solo act, but it’s all the calculated work of Shaw.

Shaw formed Magic Mint as a solo side project to Color Animal due in part to the band’s overbooked schedules and Shaw’s continued creativity. Magic Mint’s first album, Grand America, debuted in 2014 as a unique testament to Shaw’s ability to fuse together the sounds of prog-psych groups like Dead Meadow with the surf rock elements of Mikal Cronin’s 2015 release, MCIII. There’s an unmistakable element of nostalgia permeating throughout the album—as evidenced on the track “Happy Ever After,” a song that opens with guitar melodies layered immaculately beneath vocals tinged with the irreligious fuzz of Ty Segall.

“I was listening to a ton of bands with minimal, electronic drums, delayed vocals and a lot of echoes,” says Shaw. “I wanted to try that aesthetic, and I was trying to figure out if I could make a full band sound as a solo act that didn’t sound like a singer/songwriter, acoustic thing.”

Shaw is no stranger to tailoring music to specific environments. He previously contributed to the original score for two films, The Strongest Man and Must Come Down, for Utah-expatriate filmmaker Kenny Riches. Shaw’s relationship with music and film is solid enough to extend into Magic Mint’s future. “I’ve had this delusion of scoring an album, kind of like what Pink Floyd did with Alice in Wonderland, to an old Vincent Price movie called House on Haunted Hill,” he says. “I feel like Magic Mint is the right kind of project for that movie.”

Perhaps what inspired Shaw the most to start a solo project was the rotating question of whether or not a single person could create the sound of a full band. There isn’t a straightforward answer to Shaw’s “Can it be done?” question. Shaw compares playing shows to walking a tightrope. “I’m setting loops and I’m triggering the drum machine with my foot. If I start playing a song and I forget to turn on the extra echoes, I just either have to go with it or switch it,” Shaw says. “If I switch it, I have to be quick about it, but if I screw something up, it’s out there.” But Shaw doesn’t view these occurrences as mistakes. Rather, they’re a part of the organic process of creating and experimenting with new sounds.

Although the song structures of Magic Mint may be deeply rooted in traditional pop music—“Most of the songs are in major keys with simple song structures,” Shaw says—the music of Magic Mint also presents an element of chaos. “I try to invite chaos into what I’m doing,” says Shaw. “That’s a lot of what I do with the loops. I run my guitar through one loop pedal and I run my vocals through another loop pedal—they’re not always synced to each other.”

There also isn’t a specific algorithm behind Magic Mint’s sound. On the contrary, it’s an entity in perpetual evolution. “The pedal I work with has five knobs, and I generally like to know where they’re set, but I don’t obsess over them. It depends on how the room is and how the environment is,” Shaw says. “I’m trying to create tones and notes that go well together, and I will end up with this loop that has infinite possibilities. Some people might consider that a mistake, but it’s not.”

For Shaw, playing live isn’t only about the physical act of creating music—there’s a deeper connection. “I feel like performing is the most zen I’ll ever get,” Shaw says. “When I’m not playing music, I’m thinking about everything—my wife, my job, my dog—but when I’m performing, all of that goes away. All that’s important is the next note that I have to play and the next word that I have to sing. It’s the only time that I feel like I’m living in the present.”

As far as the future is concerned, Shaw has several different ideas on his mind—including a hip-hop project. “I’m always thinking,” says Shaw, “What else is there? What sounds haven’t I made? What else can I do? I just want to explore.”