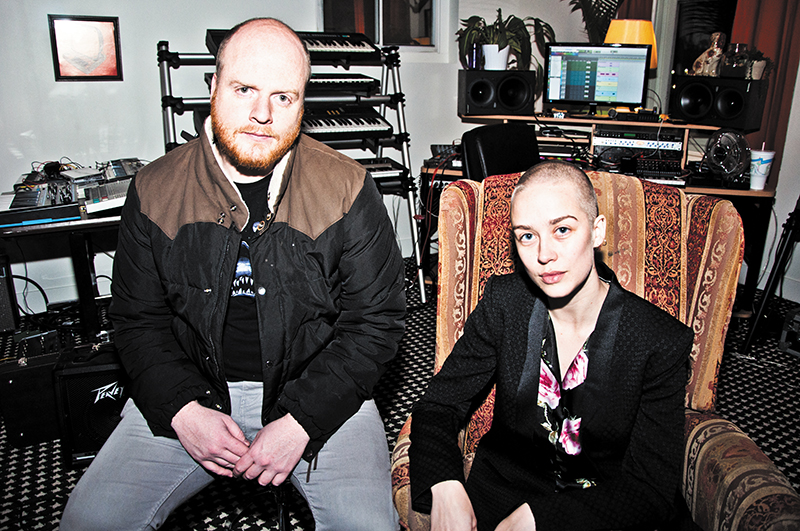 Industrious and resilient, Provo-based synthpop duo New Shack have burst into a bright existence in the last year and a half. Recalling the gauzy, early-’00s indie pop of bands like Stars and The Postal Service, and at times veering into cerebral dream worlds inhabited by Cocteau Twins and Purity Ring, New Shack’s Catherine Leavy and Eric Robertson have hatched a glistening, vintage-inspired synthpop sound that’s all their own.

The pair formulated New Shack in 2014 during a period when they were living on separate continents. Though Leavy was living in Germany and Robertson in Provo, they collaborated virtually, each working on their respective contributions to songs. “I would make beats, songs and ideas, and then send them to her,” Robertson says. Leavy would respond quickly with vocal tracks for each song. “It was collaborative,” Leavy says, “but we would work separately. I would come up with some kind of story or lyric. I’d write vocals and send him back some kind of demo.”

Despite working across continents, New Shack was a perfect collaboration for Leavy and Robertson, who released an EP in November of 2014 and their debut full-length, Shadow Girl, in June of last year. “There’s been times where I’ve sent her a track and like, three hours later, she’s sent back a full demo, and we’d maybe change one thing, if anything, from that to the final,” says Robertson. Leavy’s ability to adroitly add lyrics to Robertson’s demos makes the band’s process quick. “Eric’s able to build these tracks that are so unique and so great,” Leavy says. “Usually, when he sends me an idea, the track is already [fleshed out]. I’m like, ‘Yes, this is exactly right.’”

Leavy, who now resides in Provo, contributes serene vocals and beatific lyrics to Robertson’s  perfectly produced vintage-synth sounds. “Once I get a melody in my head, I tend to write songs in a kind of fury,” she says. “I write lyrics and poetry a lot—I keep files and files of it on my computer. Sometimes Eric will send me a track that really speaks to me, and I kind of start hearing a hook, and I might connect it to words I’ve already written, or I’ll write the words to that melody I hear.” Leavy’s airy vocals complement Robertson’s electronics, and together, they blend into a complete whole. “What I really like about New Shack is that I write the beats and she writes the melodies and lyrics,” says Robertson, “and we don’t really get into each other’s business too much. I think that’s why it works so well.”

The duo’s collaborative sound shines on Shadow Girl, a 10-track album of dreamy synthpop crafted with vintage synthesizers. Though the album has a gritty, analog-synth flair, Shadow Girl’s magic is in its flourishes of subtle, modern twists. “There’s definitely a modern edge to it,” says Robertson. Leavy agrees: “While there’s a lot of actual ’80s vintage sounds, I do think our sound is pretty niche—it’s pretty different,” she says. The album balances neatly between vintage-synth attitudes and contemporary leanings. Glossy synths and chimes color tracks like “Operation” and “Stereo Station,” while tiny beats, claps and samples skitter across the album, placing it on a forward-moving path. Pulling each track along, Leavy’s vocals shift to the tune of each track, one minute dreamy and ethereal, another, pulsing right along to the beat.

Shadow Girl’s forward momentum has brought them accolades here at home and abroad, including a nod on SLUG’s own Top 5 “Organic Free-Range Local Albums” of 2015. “New Shack really clicking and being successful so fast is really kind of unexpected,” says Leavy. “I recorded [New Shack’s] EP on cellphone earbuds, like, not even iPhone earbuds. It was really, really lo-fi.” Not content to coast on the wave of Shadow Girl’s success, Robertson has begun to incorporate guitar into their previously all-synth aesthetic for their new EP, entitled Eingang. “The tones on the guitar that I’m using now are pretty ’80s-sounding as well—ambient and big,” he says. Their August 2015–released single, “House of Frankenstein,” featured a chorus-saturated guitar hook, but Eingang promises to push the envelope further. “We’ve even gone farther from that with guitar and big drums,” says Robertson. “There’s less synth on the new one.”

Eingang will also be the first release on New Shack’s boutique label, Pleasant Pictures Music. Pleasant Pictures—which is also the name of the studio where Robertson produces music for select local acts, including Hive Riot and Static Waves—will release Eingang and other curated records digitally and physically on CD and vinyl. In addition to starting a record label, the duo also acted in videos for four of their tracks in 2015, ranging from the Mad Max–esque aesthetic of “Disassembly” to the minimal visuals in their “House of Frankenstein” video. They also play selectively in Provo and Salt Lake at hometown venues such as Velour Live Music Gallery, Muse Music Cafe, Urban Lounge and Club X.

You can see New Shack live at SLUG’s Localized on Feb. 18 at Urban Lounge. Purchase New Shack’s music at newshack.bandcamp.com, and find them on Facebook, or on Twitter at @newshackmusic.