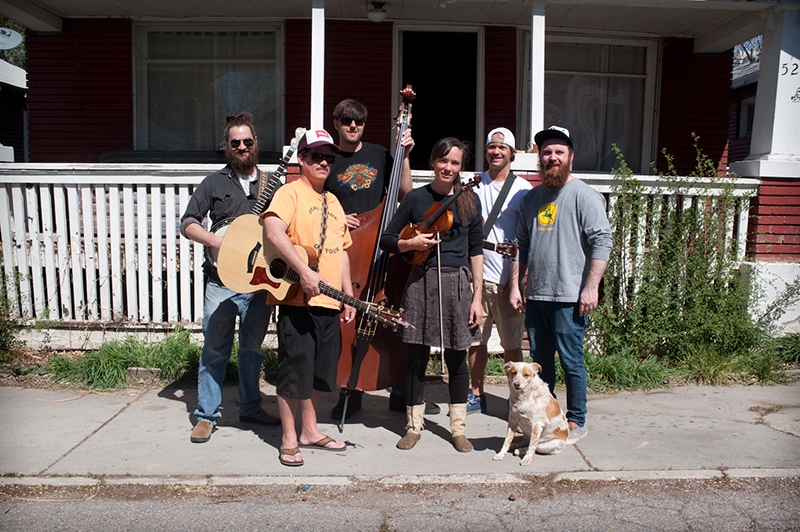 This month’s Localized is going to be one hell of a musical showdown. Kaleb Hanly will open and set the scene for a night of untamed folk and bluegrass. Following, Porch to Porch will heat up the stage with their wild riffs, foot-tapping harmonica and bending elbows. The night will end in a Western frenzy by Six Feet in the Pine, who aren’t your average church-goin’ folk, though they’re serious cowboys, strummers and pluckers. Stop by Urban Lounge May 15 at 10 p.m. for just $5, sponsored by Uinta Brewing Co., KRCL 90.9FM and Spilt Ink SLC.

Porch to Porch are an upbeat, folky bluegrass ensemble with fast-picking fingers and a wailing harmonica. They live by their motto, “For the love of music,” which harmonica player and designer Willus Branham penciled into their band logo five years ago. They’re a big, happy, whiskey-drinkin’ family who dedicates their Wild Western project to spreading good vibes, jamming and going right into the crowd. The band is fearlessly dedicated to connecting with people, and it’s no surprise they found each other. “We are the tightest, loosest band you’ve ever heard, and I try to go out and talk with people in the middle of a song, with the harmonica,” says Branham. They once sang “Somewhere Over the Rainbow” for a Hawaiian man at Cliff House that ended in tears. “He hugged us and said that his wife had died, and they played that [song] at her funeral,” he says. “It’s those moments where I’m like, ‘This is why we play music.’”

It began at age 16 when guitarist Marc Glauser and Branham began playing in the basement, and then later at clubs around the Salt Lake Valley once they were of age. Guitarist DJ Gray played in a reggae band at the time. “DJ opened up for Eek-A-Mouse … We said, ‘Wait, didn’t we play little league football with that guy?! That’s DJ Gray!’ We had the whole crowd chanting DJ GRAY!” says Glauser. High school homie and bassist Nick Harris, or “Big Nick” (also in Filth Lords), had been playing with Benjamin “Benjo” Chapman (banjo, guitar) and Anastasia Lund (fiddle), who eventually opened for Porch to Porch. After one collective porch session, everything felt right. “Music brought us all back together,” says Harris.

Two years later, Porch to Porch have played at plenty of local shows and on plenty of porches, naturally evolving to playing outside at places like Snowbird, Willow Creek Country Club and La Caille. “Maybe we can go to different states around the country and find local musicians like we have here, interview and play music with them and also go to random peoples’ porches,” gray says. “Hopefully, we can play [their] favorite song and bring a smile to [their] face—we’re all about smiles, man.”

Gray says it’s all about the human connection, while Chapman says, “Whether it’s with other musicians, audiences or in our group, on the porch, having fun, there’s something special about sitting in a semi-circle outside and being able to hear, see and feed off each other, in contrast to playing in bars, standing in a line.” The band is all about improvisation and respecting whomever’s “feelin’ it” by returning to the same loop or hook at the end. “It’s great that we have no electric instruments in the group,” Chapman says. “We can always throw it down organically.” Though being an all-acoustic band, bars and clubs struggle with having to mic everything. “Urban Lounge, though…” Glauser says. “Ryan Landry, that guy has us on lock down.”

These local porch rats sing songs about living in the valley, about “this wacky, weird, wonderful place we live in,” says Harris. Porch to Porch practically bleeds salt, too. “I might be biased, but this is the best city,” Glauser says. Branham explains how Utah, specifically Salt Lake, isn’t well-represented in the music industry—there is more to Salt Lake than people think. So, Branham decided, “Fuck, let’s rep SLC!” and so they do on tracks like “The Wasatch Fault” from their self-titled EP, released this past March. There’s a lot of relatability and humor in their lyrics—“they are folk drinking songs,” says Gray. Glauser says there is a slightly dark tone, but mostly a “humor, laughter, let’s eat, drink and be merry because tomorrow we could die, who the fuck knows” kind of way. “Yeah!” says Harris.

Their Salt Lake–inspired EP is an entirely collaborative effort, which is a blend between new and old songs, devoid of all egos. “No one person writes anything, and we all sing the songs,” says Glauser. There’s no “lead singer,” although one can easily pick out the low, booming bluegrass voice of Harris on tracks like “Freedom.” There are three solo-instrument players. “Some songs just spark from Big Nick playing the bass,” says Glauser, “and Benjo wrote the song ‘Just a Ride,’” which is meant to showcase the banjo with Lund’s fiddling frenzy.

The EP was recorded at Rigby Road Studios with Joel Pack, who selected Porch to Porch for First Friday, where they recorded the track “The Wasatch Fault” for free onto a disc to share with the public. The experience with Pack was so positive that they finished their five-track EP at Rigby Road Studios and are currently working on their full-length album there, which is expected to hit the streets in January 2016. They affirm that Pack knows his shit, and brings a lot of helpful knowledge to the production process.

Porch to Porch are focusing on finishing their full-length album, playing new venues like The Depot and opening for some bigger-name bands like Old Crow Medicine Show and John Prine. Together, they’ll keep representing Utah and continue to connect with people and love the hell out of playing music. Make sure to check them out at soundcloud.com/porch-to-porch and catch the train to Urban Lounge on May 15!