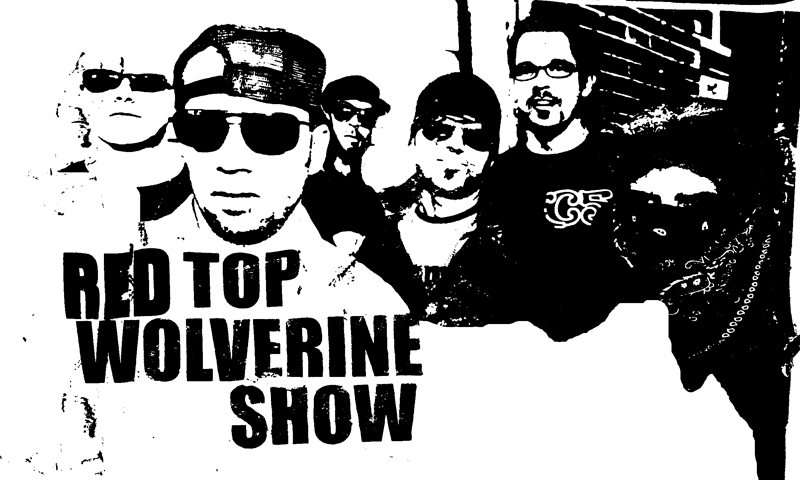 Loiter Cognition, Red Top Wolverine Show and opening act The Alkaloids will be playing SLUG’s Localized at Urban Lounge Friday March 9th. This will be the craziest most intense show of all time so be there.

I met with Red Top Wolverine Show on a rainy Sunday afternoon. These guys are the most laid back easygoing group of people that I have ever met. I wasn’t sure what to believe out of all the stories that they were telling, tales of jail time and felony offenses, leaving band members behind at the venue after gigs, “Yeah we left Stanley, at the gig once he was busy trying to slay some dragon—we told him we were leaving,” said Jailbait. All of the members met through various friendships, family or former bands, except for one, whom they found trying to break into a band member’s car to steal his iPod.

RTWS has existed for almost two years. Their music is a collection of blues, funk and rock. RTWS have gigged as far as Logan and Jackson Hole.

“We have a goal to play every dive bar and club in the whole valley,” said Frisco. They also have plans to play a few shows in Moab, Las Vegas and to hopefully tour to the South Eastern part of the country “There’s some pretty cool blues bands down in Mississippi,” said McCarley.

The group says they have too many musical influences to name. I ask to get a quick overview and McCarley says “Any old Delta blues before 1945 and early punk rock like the Stooges” and everyone else brings their own influences from hip-hop to country to rock.

RTWS have one record and released one CD titled Sloppy Jalopy on the Rev.313 record label. One listen through Sloppy Jalopy and you can immediately hear all the influences the band members mentioned, especially a very strong emphasis on the Delta blues. The recording, which was done by McCarley in his basement studio, named “Mouth of Hell” (or as Bucket likes to call it “The bowels of hell”). Sloppy Jalopy is a dark dirty and powerful recording, it sounds nothing like anything you’ve heard from any local Utah band.

They also have plans to someday release their soon to be hit single “Jesus I’m Rollin With You,” a song about Jesus Christ’s crime fighting adventures.