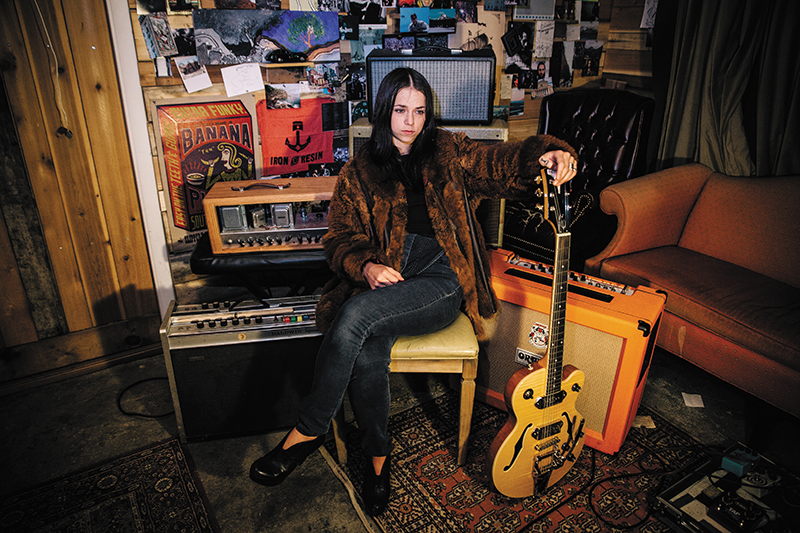 Sarah Anne DeGraw is a solo singer/songwriter immersed in the local music scene. The guitar is the foundation of her eerie musical disposition, both acoustic and electric. Her music often reveals sharp, high-pitched notes on the keys or six-strings which adds an assertive spook to the overall soulfulness of the music. DeGraw’s slow strums and simple progressions start and stop perfectly to frame the impressive rises and falls in her voice. The sinister lyrics are sung with an uncanny strength and grace, leaving you both mesmerized and unsettled. She moves through the valley with a haunting aura about her, playing shows at the State Room and Hogs Wallow, and naturally positioning herself among other talented artists in the community at Craft lake City’s DIY Festival.

SLUG: Music has been a part of your life from a young age. Could you speak to how your relationship with music began and how it has developed?
Sarah Anne DeGraw: Music started at age 5 with singing harmony in a family band, to plunking around on the piano, to learning the classical world through cello, to finding a classical guitar, and then an acoustic, then electric, to playing the drums in a rock n’ roll band, and back to electric. Growing up, music was part of the deal. It was just something that I did, like going to school as a kid, or taking out the trash. It wasn’t until later that I actually fell in love with it and started to discover its avenues. Growing up with it made creating much more comfortable, and I was compelled to play instruments and sing because it was so available. Its development has been a strange course of events, also. The wider the range of my influences, the more my own style changes and my scope broadens. It’s a tide that will never stop shifting.

SLUG: How did you get your start with this solo project? What prompted you to focus on your solo career versus playing in a full band?
DeGraw: Being solo was all I knew was possible in the beginning. I liked making music and was just doing what felt good. I want to start a band. Soon. Performing all started with my dear friend, Ben, telling me about this venue in Provo called Velour Live Music Gallery in 2008 or 2009. Forgive my memory—the years and months all blend into one at some point. He raved about it to me on the phone one day, and so I developed a subconscious notion that I would indeed play there. When I was 17, I went to an open mic and they asked me to come back. The rest is history. I got to know Corey Fox of Velour and he gave me my start, really. I didn’t have any idea what I was doing. I just wanted to play music.

SLUG: You collaborated with Johnny Betts. Could you speak to that experience?
DeGraw: I wish only that we could’ve done so more. Our time creating together was too short and I hope that we’ll do more in the future. I’m his Number One fan and he’s an incredible songwriter.

SLUG: Per your Craft Lake City DIY Fest performance, it seems like you’ve moved from an acoustic-guitar–oriented sound to a more bluesy electric sound. How did you grow into this style?
DeGraw: Influence. I didn’t discover the blues and rock n’ roll until later in life, and when I did, it all started transforming. Kirk Dath of Crook & the Bluff really turned me on to a lot that I was unfamiliar with, and since hearing more and opening my mind to new ways to experience and make music, I could never leave the electric.

SLUG: Given your penchant for both acoustic and electric techniques, how have you previously written those songs with those technical sensibilities in mind? How has your songwriting developed?
DeGraw: Lots of the tunes were written on an acoustic guitar, actually, and then moved to electric. When I started on the electric, my writing changed and keeps changing. You can do things on electric that you can’t on the acoustic. Both are equally as beautiful in different ways and there is room for both. These times are as evolutionary as I’ll get out. “Oh, these time are a changin’.”

SLUG: How do you weave guitar, singing and lyrics together for your style?
DeGraw: I suppose the songwriting, when it’s good, just happens. I’ve been asked the question “What comes first, the music or the lyrics?” and, when it’s good … I can’t really recall what came first or what I was trying to say. I suppose when it’s good, I don’t think, I’m just alive and present and it all happens at once.

SLUG: You’ve only received formal training on the cello, and you sing and play piano, but you mention in your Facebook bio that when you first picked up a guitar, “It was like the lock in the strings had found the key in [your] fingers.” What aspect of the guitar most drew you in and worked with your musical vision?
DeGraw: Well, I said that because writing on the guitar came so naturally to me. At the time I first discovered the guitar, I was writing on a classical, and the tunes were very different sounding. All of the years of classical influence and surrounding infiltrated what I was writing. I kept writing songs on the piano, but the guitar really got my voice. They just liked each other. Writing flowed much more easily on those strings than it had with any other way I had written before.

SLUG: Which guitar(s) have you been using lately, and what kind(s) of sounds are you trying to finesse with them? What does your tone lend to your sound overall?
DeGraw: I’ve been using an Eiphone Wildkat with P90 pickups and a bigsby. The sound I get out of the guitar and the Fender 75 amplifier is rich, bass-heavy and a little distorted, which is what I’ve gone for with these tunes specifically. I have a Fender Mustang on layaway at House of Guitars in SLC that I can’t wait to get my hands on. The tone really changes everything, to how I write, play and sing.

SLUG: Which aspects of your skill set do you like to underscore the most as a solo artist?
DeGraw: I’m a singer. That’s what people seem to like the most, and it’s what I like doing the most. You can’t really leave anything out, though. I think that my voice works best with an electric guitar and blues riffs, and it didn’t always have that.