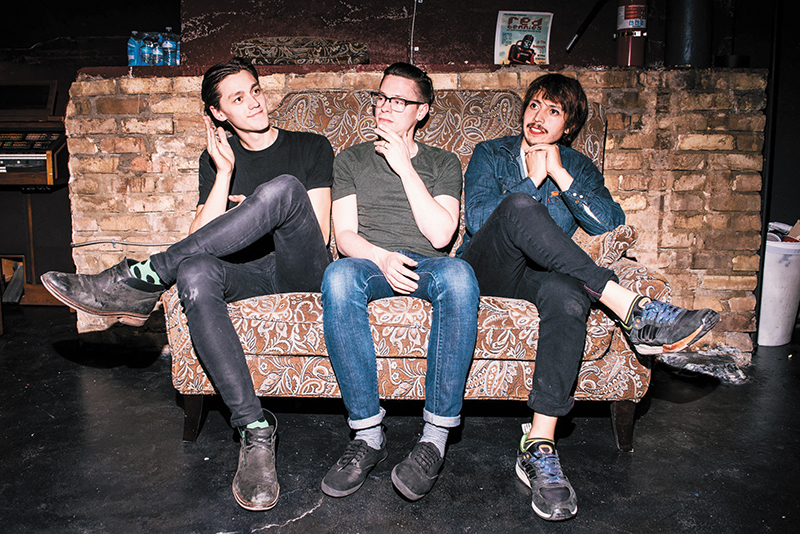 Local trio Soft Limbs doesn’t want to be known for a Salt Lake sound—on the contrary, the psych-rock punk group aims to redefine their place in the local scene. Soft Limbs fuse together instrumentation lifted from garage rock groups of the late ’90s with dynamic, unpredictable psych melodies that lie somewhere between the early, experimental guitar work of Modest Mouse’s Isaac Brock and the art-punk catchiness of Liars’ 2014 release, Mess—but that’s just scratching the surface. If you were to examine Soft Limbs under a microscope, you’d find jam melodies that lie somewhere between the Greenwood brothers and Ian Curtis. Deductively speaking, it appears as if Soft Limbs are taking the DIY approach to a new level—and it works.

Alex Duran formed Soft Limbs with former drummer Curtis Pettygrove in early 2015, releasing their first full-length, Major St. Sessions, in April of that year. The most recent Soft Limbs album, Small Village Rumors, was released via tape at Diabolical Records the following December. The tape release was a bittersweet moment, however, because after recording and releasing three albums together, Pettygrove moved to California, providing an opportunity for current bassist Michael Paulsen and drummer Ian Francis to join the band that following winter.

Both Francis and Paulsen approached Duran about becoming involved with Soft Limbs, a move that would eventually indicate how the band would function logistically. “I aim to be a second brain to Alex, in the sense that I just offer my insight and hope that it propels Alex’s creation a little further,” says Francis. Duran aims to create a culture of liberation within the local music scene. “Soft Limbs is about personal liberation,” Duran says. “I want Michael and Ian to infuse their personalities into it.”

Infusing personalized style into the music is nothing foreign to Francis and Paulsen, who also both play in local group Indigo Plateau (Paulsen on guitar/vocals and Francis on drums); Francis also drums for local band Josh & Ian. It’s a unique mélange of musical styles that lend Soft Limbs their frenetically calculated vibe. When Duran isn’t multitasking loud, eclectic guitar loops and vocals (such as the newest version of the track “Poketz,” available on their Bandcamp page),  Paulsen is creating leading basslines and irreverent syncopations. “I’m traditionally a guitar player, not a bassist,” says Paulsen. “I look for ways to play the bass like it’s a lead guitar.”

In terms of influences, Soft Limbs view them as entities that transcend whatever artist they’re currently listening to. “Influences go way beyond bands,” says Francis. “Whatever has me on an emotional high that day influences how I’ll drum or perform. Going through the ups and downs of life is more influential than what I’m listening to.” And judging from their most recent recording from Lounge Nite at Twilite Lounge, it’s apparent that the new lineup is deflecting any type of genre pigeonholing. The track “Tide Up” fuses the psych pop elements of Mac DeMarco with the darker territory of Kurt Vile as Duran sings, “Tell me what you’re after / Come on baby / Come on baby / Have a sense of laughter.”

This perspective plays directly into one of the band’s centering philosophies: community. “We want to unite the community,” says Duran. Paulsen currently books free shows at Sugarhouse venue The Borough (819 E. 2100 S.). “Most people group music by genres, but we’ve set this aside. We’ve started grouping bands according to social dynamics. When I book shows, I try to pick bands from diverse social groups and cliques,” says Paulsen.

This philosophy circles back to Soft Limbs’ commitment to artistic self-liberation—on any level. “We express our art the way we want to. We’re going to express it in whatever way we want, and we’re not going to apologize for that.”

When they’re not busy working on new tracks (“We’ve got three new songs, and we’re probably going to release a single this month,” says Duran), Soft Limbs are encouraging emerging artists in the Salt Lake scene to step forward. “[For] anyone who is thinking about sharing their art or being involved in the community, now is the time to go for it,” says Francis. “Salt Lake will welcome you.”

Check out Soft Limbs’ recording from Lounge Nite at the Twilite Lounge (as well as previous albums) at softlimbs.bandcamp.com.