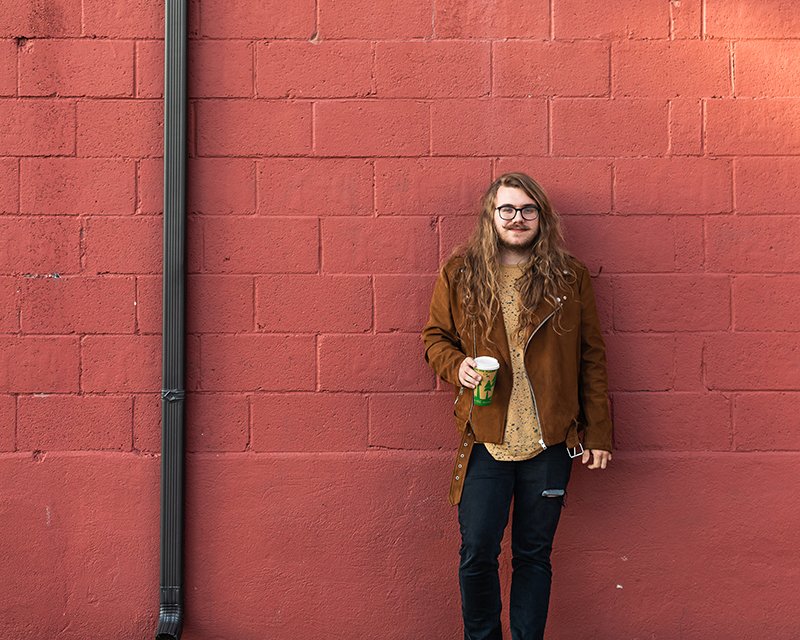 It’s December already?! Before you make those damn resolutions, catch Breakfast in Silence and Tayler Lacey with opener Rebel Rebel at the SLUG Localized showcase on Dec. 19 at Urban Lounge, a 21+ event sponsored by Huge Brands. At $5—you won’t regret it.

“We live in troubled times,” Tayler Lacey sings on his track “Death of the Post Modern Sailor”—and indeed, we sure as hell do. With a memorable voice that ranges between The Decemeberists’ Colin Meloy and Neutral Milk Hotel’s Jeff Mangum, Lacey has a knack for the past and speaks what he wishes to have spoken through his overt lyricism and strong acoustic strings. Growing up in the suburbs of Salt Lake County, Lacey, 23, began playing in a psychedelic rock band after high school before venturing off as a solo folk singer in 2016.

“I always had a soft spot and a liking for folk music,” says Lacey, who learned guitar at 13 and surprisingly never took singing lessons. “I started singing along while playing guitar. I figured out what sound I wanted to have, and from that point, tried to sound like a folk singer.” As a true autodidact, Lacey is driven by the DIY scene, and is as he says, “100 percent independent.” He makes his own CDs and merchandise. Stamped as a local musician, Lacey is proud to be part of the community and does consider the ways in which the music scene is somewhat reflective of the city and only the city. “I think Salt Lake has a cool dynamic right now because it’s on the rise in terms of population and the ‘hip’ scene, but it’s still hard because there’s not a whole lot of places outside of Salt Lake in Utah that are music-populated,” Lacey says.

“I think Salt Lake has a cool dynamic right now.”

Lacey wants to make music for a living, yet he’s mindful of the unrealistic side to the lifestyle: “All musicians’ dream is to make it big—if they want to admit that or not,” Lacey says. “It’s always in the back of your head. You want it to pay off, and ideally, I want to do music full-time and go on tours and make enough money to survive. But more than anything, I want to be able to do music as much as I like to and have enough time and energy to put my all into it.” Fortunately, the repetitive nature of performing is no struggle, as it genuinely comes easy for Lacey to read each new crowd. He finds it refreshing as opposed to exhausting. “I think a lot of it is knowing your crowd and mixing up the songs. I don’t ever change up the lyrics. More changing up how I’m playing it, making some parts more intense than other parts, reading the space that you’re in and who’s listening.”

On one of his latest singles, “Billy Big Fish,” Lacey clearly illuminates the courageous spirit of his voice and his enticement to folk/Americana. His sound is full of incandescent rhythms with a flurry of twangy, melodic strings. In other words, he’s damn catchy and impactful. When asked what fundamentally draws him to the genre, Lacey says that most of his favorite artists are from that era of the ’60s and ’70s, a time when that specific style was prominent as well as political, “singing about an older way of life and how things are changing,” Lacey says. “There’s a certain rawness that you somewhat lose when bringing in electronic instruments and computers. You lose grittiness.” Certainly, Lacey’s true-to-life tone charms listeners toward the wistfulness of the past that’s gone and forever our ghost, and you could say even the political nuances can be noted as surreal. “I don’t get too political or anything, but every now and again, I write a song that’s politically driven,” Lacey says.

“There’s a certain rawness that you somewhat lose when bringing in electronic instruments and computers. You lose grittiness.”

Lacey’s history is a vital theme that illustrates the notorious distraction of one’s nostalgia. As a person, Lacey says that he gravitates toward being more shy and reserved, which is the reason he often reflects. “It’s that feeling when you look back on something and think, ‘Oh, I should have said that, or done that,’” he says. “In my own life, I miss living in the moment.” The past matters because it’s debatable, and the intuition in Lacey’s bones creeps up song after song, but he’s not attempting to caricature these worldly issues and loved ones. Rather, it’s the impossible psyche of his own past he cares to have a word with. “When the past is leaving, or when you’re transitioning into a new thing, how much of it do you hold onto because it’s a fond memory?” Lacey says. “How much of it do you actually move on from because you can’t dwell on the past. I don’t know the answer, but it’s a point I tend to bring up in my songs.” With his guitar, harmonica and foot tambourine, Lacey is embracing and welcoming the unknown that is not merely the future but the abstract, in past reverie.

Keep an eye out for the new singles that Lacey will be releasing, and make your way to the SLUG Localized showcase on Dec. 19 at Urban Lounge. Doors open at 8 p.m., and music starts at 9 p.m.

Localized— Daisy & The Moonshines, Folk Hogan and L’Anarchiste
You, Me and The Devil: The Devil Makes Three