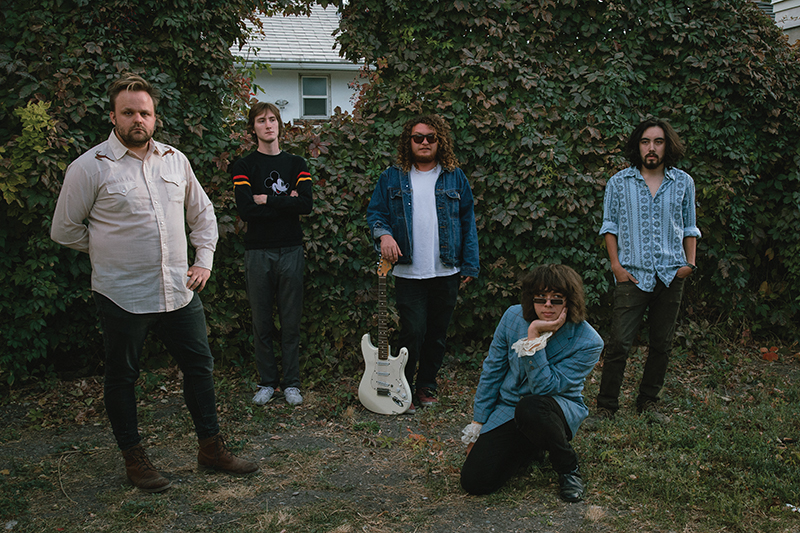 On Nov. 16, SLUG Magazine presents SLUG Localized featuring The Boys Ranch, The Poppees and Say Hey at Urban Lounge.  This evening will celebrate some of Utah’s finest surf, pop and rock n’ roll acts. Get ready to twist, shout and do the barracuda. SLUG Localized is sponsored by Uinta Brewing, High West Distillery, KRCL 90.9 FM and Spilt Ink SLC.

The Poppees were born out of the withering petals of The Artificial Flower Company and blossomed as a band refreshed, renewed but familiar to the senses. They breathe life into a new era of jangly indie rock by evoking a concoction of 1960s harmonious Monkees-esque tunes that warm their listeners with a fuzzy daze of sweetened-eggnog-induced psychedelia. Their music is perfect for a tonic lounge or dimly lit speakeasy. They are, however, not to be confused with the 1970s power pop group of the same name. These Poppees are Andres Mitchell, Cody Rigby, Moo Rudolph, Sully Swoboda and Michael Cuenco. Rigby says, “Like a plant that grows and loses its leaves, we, too, grew into what we are now.”

They formed within a deep appreciation for music and its celebrated history. Together, they boast a wide range of influences to draw from. This includes Small Faces, The Guess Who and Donovan, among other blue-eyed soul bands from the 1960s. To be sure, their individual music tastes are not limited to those previously mentioned. Swoboda proudly admits that on his birthday, Lil’ Wayne and Tha Carter V are found in his celebratory selections. Rigby, on the other hand, finds himself immersing in the Yé-Yé Movement via the likes of Serge Gainsbourg. All of these influences leave a profound mark, as Cuenca says, “I’m always getting a broad variety of new and great music from the rest of the band—which is a huge perk and always keeps it interesting.”

This wide appreciation for varying genres proudly displays itself as the band seeds a trail throughout the Salt Lake City gigging circuit. They have shared the stage with many of Utah’s local darlings, including Slick Velveteens, The Boys Ranch, Major Tom & The Moonboys, Static Replica and 90s Television. Not to mention, they’ve been a staple in the Urban Lounge tribute shows—some of the more notable performances are for The Beatles and Lou Reed tribute shows. Speaking of performing the popular tribute shows, Mitchell says, “It pushes us out of our comfort zone as musicians and gets us back to rock n’ roll appreciation, as a reminder of what made the greats great.”

For The Poppees, the tribute shows allow them to demonstrate their versatile skill in learning covers from favorites like The Beatles or Lou Reed. These shows also present opportunities to learn from other musicians in the community. On Sept. 1, The Poppees performed the Velvet Underground, Lou Reed Tribute Show at the Urban Lounge. “It was a blast. Everybody killed it—90s TV, Static Replica, Kale Chip,” says Cuenco. “I like to think all the bands worked real hard to put it all together and make it a great show, which is of course true—but then again, Lou Reed made it pretty easy for us to rock our socks off.”

During this show, The Poppees shared a bill with longtime friend and producer Denney Fulller of The Boys Ranch. Fuller, who played in Static Replica that night, has worked closely with The Poppees on their new album, Hot Dogs and Wine—released on March 23, 2018. Speaking of their new album, Mitchel says, “[It’s got] something for everybody, better production and stronger songs.”

Hot Dogs and Wine highlights The Poppees’ harmonious psych-pop tunes. One song that stands out is “Yuika Doesn’t Play in the Band Anymore.” It’s a bit cheeky and quite the catchy poppy number about former member Yuika. Rigby says, “[It’s] a nice way to go see Yuika off to her next thing.” Other songs like “Julie Sky” and “Teenage Wonderlust” capture the essence of dreamy pop with sounds that cross the spectrum of folk and indie rock.

Other than working to produce Hot Dogs And Wine, The Poppees have also guested on the Twist and Shout Nights hosted by The Boys Ranch at Garage On Beck. “It was a great time,” says Rigby. “The Boys Ranch put on such a great show, and I’m hyped we got to open for and play with them.” During these performances, The Boys Ranch present a starstruck show that includes dancers and strictly vinyl DJs. Mitchell says, “It was a wild scene [with] go-go dancers [and] everyone boogying all night long.”

The future looks bright for The Poppees. They are continuing to blaze a trail through Salt Lake City, playing gigs and actively recording. “We are excited,” says Mitchell. “Our next album should be better than Hot Dogs and Wine in every way and will be our official ‘debut’ of what the Poppees are all about.” Look for them on Spotify, Bandcamp and at SLUG Magazine’s Localized Nov. 16 at Urban Lounge with The Boys Ranch and Say Hey. It’ll be a wild time, so be sure to come out and play.