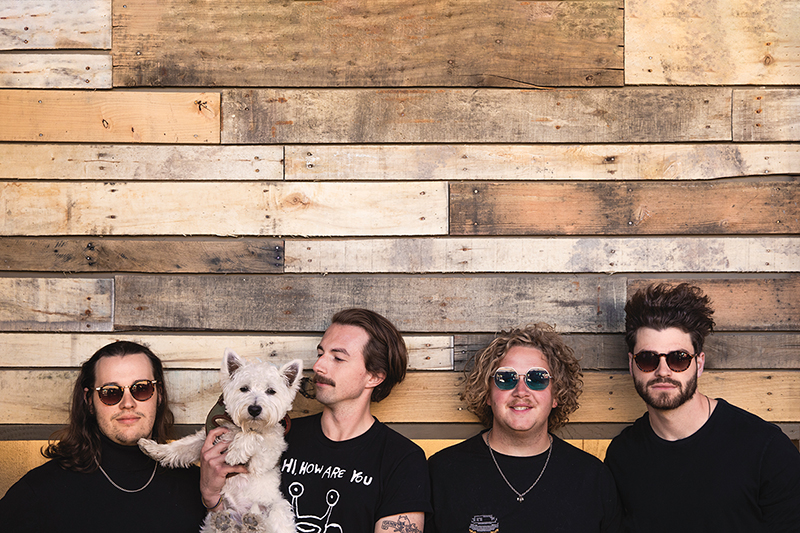 July baby! It’s the thick of summer, and the days are as long as the nights are sweaty. The August dregs are just ahead, so take a night with us to appreciate the season while it still feels this good. This month’s SLUG Localized features performances by The Ugly Boys, Doctor Barber and Josaleigh Pollett, all performing at Urban Lounge on Thursday, July 18 at 8 p.m. for $5 at the door. And as always, SLUG Localized is sponsored by, Tito’s Handmade Vodka, High West Distillery, 90.9FM KRCL and Spilt Ink SLC.

Are the Ugly Boys actually ugly? Well, they are dedicated, hardworking and focused, with substantial talent to match. Since beauty is in the eye of the beholder, their story and presence make them truly beautiful. “We all wanted to be in a band that had dedicated members and a band that represented harder work from every member than these lopsided bands where fewer members did hard work,” says Benton Wood, guitarist and vocalist. In the summer of 2017, Wood, Paul Zuniga (bass, vocals), Cole Eisenhour (percussion, vocals) and Peter LaBarge (keys, vocals) began to charge toward this vision of the hardworking band they always wanted to be a part of.

“We had done a lot of different things with our other bands, so starting with a clean slate, we knew how to structure things,” Eisenhour says. “We knew how to take different approaches and things we needed to get in through the door, instead of figuring it out along the way.” Eisenhour exemplifies this, as he currently plays in Mojave Nomads. Wood played in Raccoon Dog, Panthermilk and briefly in Little Bear, and Zuniga currently plays in July’s Localized co-headlining band, Doctor Barber. Each a talented musician in his own right, they come together to create fun, what they call “damn-good pop.” And damn, it’s good.

“We can come into a room together with skills coming from the same vein to make something we are proud of,” LaBarge says. Pride is a common theme for the Ugly Boys—taking pride in what they create, putting the sweat into their music and all of the other elements of engineering their well-oiled machine are their driving forces. Another driving force for them is having fun. This is where their sound comes in. Now, no matter how old you are, dancing is awkward. It takes the right room, moment and a touch of courage to move your body to music. The Ugly Boys bring forward all of those elements on a silver platter with the patters of their funky guitar lines, flighty vocals, keys and dance beats, making dancing to their music a breeze.

“I’m excited to play the Ogden Twilight this August.”

“Honeydew,” from their latest EP Do You Like Me?, is reminiscent of a junior high “School’s Out” dance that actually went right. “Met you at a Party,” a collaboration with Strange Familia, carries a clap beat that incites a desire to clap and sing along with their inviting and relatable lyrics. These aren’t just your typically structured pop songs; they come at you like the summer anthem you’ve been waiting for. You can hear the Prince and late-’80s influences most in “Babe Don’t.” The song features an impressive vocal range from all of the members as they overlap, weave in and out and create a perfectly executed and layered sound alongside the funky bassline, solo guitar and simple drumbeat. Recorded on their own, it’s skills like the ones that the Ugly Boys demonstrate in Do You Like Me? that caught the ear of Ogden Twilight coordinator Jared Allen, landing them a spot at 2018’s Ogden Twilight and again at this year’s installment. “I’m excited to play the Ogden Twilight this August—we played it last year and it was a little rough,” Zuniga says. Believe it or not, last year’s Twilight was the Ugly Boys’ first show as a band. “How we got Ogden Twilight as our first show was that three of the four of us went to Las Vegas to see The National because we knew that the guy who puts on was going to be here, and of course we like The National,” Zuniga says. “We kinda went and partied with him in Vegas, waited until he got drunk enough to play him our music and he liked it!”

“There’s a lot of irony that surrounds the beginning days.”

Aside from their skills in creating and recording music, another notable trait about the Boys is their work ethic. Eisenhour, with the input of the rest of the band, created all of the branding, graphics and content that makes them stand out so vibrantly. “I’m not the hub for it all, I throw it out, and they say, ‘Let’s change this,’ and that is how we collaborate,” says Eisenhour. Their Instagram (@someuglyboys) is flourishing with “fake ads,” music video promos and content that not only relays their potent individual personalities, but also the time that they spend on this work. Their website (someuglyboys.com)—which is perfectly organized and curated—upholds the standards and quality of their music with information on their merch, tours, shows and music videos.

“There’s a lot of irony that surrounds the beginning days,” says Zuniga. When they were coming together in the beginning, all of the members of the band were experiencing a summer of heartbreak. Within two months, every member left long-term relationships that, in a way, influenced the beginnings of their sound. “When we were choosing our color for branding, we chose purple. Soon after, Pantone announced that the color of the year was going to be ultra violet,” says Wood. Serendipities like these tie the group closer together and serve as signs that they are on the right path. Today, the Boys have three tours under their belt, one festival, and many more shows to go. Come see them get ugly alongside Josaleigh Pollett and Doctor Barber at the Ogden Localized showcase on July 18th at Urban Lounge.

Local Review: Ugly Boys – Do You Like Me?
Soundwaves Episode #311 – Ugly Boys