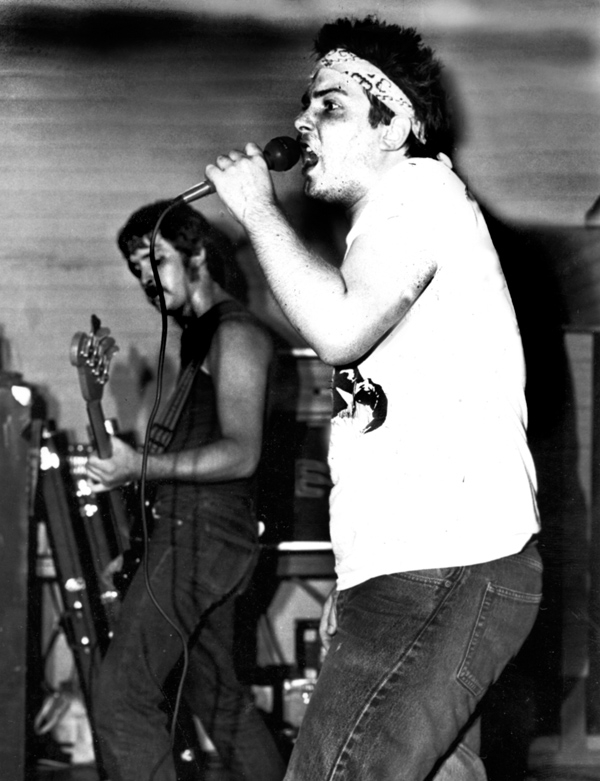 On Nov. 9, 2008, Brad Barker was informed of the unexpected death of his brother, Brent Barker. A few days prior, he had visited Brent in the hospital following a routine medical operation.  He told his brother that Barack Obama had won the recent presidential election.  In return, his sibling raised a thumb up. “He couldn’t talk after the operation, but otherwise he seemed just fine,” says Barker. “It hit me extremely hard me hard when Brent died. I still struggle with it every day.”

Twenty-eight years prior to his brother’s death, 1980, Brad Barker was a sixteen-year-old kid in West Valley City, UT. Unsettled with the circumstances at home, Barker spent much of his time with a close friend, Kelley Evans. With a mutual love for music they decided to start a band together, a band named Victims Willing. “We started playing around the time that Maimed for Life, The Potato Heads, The Bad Yodelers and The Massacre Guys came along. There weren’t clubs around back then. We played in houses or rented spaces,” says Barker. “At first people had a hard time ‘getting’ us. We were far too metal for the downtown punk scene and way too punk for the metal-heads out in suburbia.“

Regardless of any initial setbacks, the band went on to become a staple of the Salt Lake underground music scene over the course of the next decade. The band underwent a few member changes (including Brent, Barker’s brother, and Terrence D.H.,) but eventually settled on a lineup including: Barker on vocals, Evans on guitar, Joe Jewks on bass, Derek Stearns on drums, and Steve Hickock, also on guitar. The band soon found itself sharing a stage with touring acts, bands like The Descendents, S.N.F.U., Youth of Today, and NOFX. Brad Collins, owner of Raunch Records, released a 7” of the band on his record label. “I like to think the band was a success,” says Barker.

Victims Willing died a relatively quiet death in the early 1990s. After failing to procure a record deal with a European label that had taken interest in the band, and a lack of any new

song material, the members decided to take a break. The band agreed to take the summer off with the intention of getting back together the following autumn. “I remember Steve was incredibly sad with the idea,” says Barker. “He even stated that he felt if we took the time off it would be the end of us. Sadly he was right.”

“More than anything, I just wanted to spend some time with them again.”

The months following his brother’s passing were particularly difficult for Barker. “I began to start thinking about what was really important to me,” says Barker. “It’s so easy to get caught up in the day-to-day stuff. If you were to ask me a year ago if Victims Willing would ever get back together, I would have laughed at the notion. But after Brent died I realized how important my friends are to me. Joe and Kelley are like brothers to me. I love them as much as my siblings.  I realized that it is really important to me to have them in my life.” Brad contacted what members he could. To his surprise, both Evans and Jewks agreed. “I told them that I didn’t care if we just got together to play some songs in a basement somewhere. More than anything, I just wanted to spend some time with them again.”

In addition to former members, Evans and Jewks, Troy Lemmon joined on drums and Matt Moyle on guitar as new members. “In some ways the band has come full circle. Troy use to come and watch the band rehearse when he was a kid. He was a drummer and he liked to come and watch Derek play.  He contacted me offering to play with the band if we decided to get back together,” says Barker. “I also got in touch with Matt. He played guitar in a band with me called Knowitall for years.” Victims Willing began rehearsing again in the spring of 2009.

“The band has never been a band full of conflict and egos,” says Barker. “One of the members will put together some music and bring it to band practice. I bring the lyrics. We just jam the song and see how it goes. It’s a very fluid process. There isn’t any petty competition. We’re all too old for that.” Barker continues, “Matt and Troy have brought something really great to the band. I definitely think it is an improvement. I get people coming up to me after our shows talking about all the times they have watched Victims Willing play over the years.  They go on to say that they have never heard the band sound so good. We hope to be back in the studio soon.”