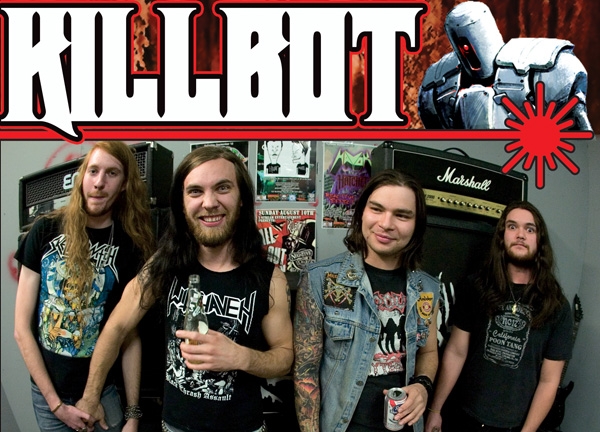 Prepare for the thrash/stoner-metal onslaught of the decade Friday, January 15 for SLUG Localized (at the Urban Lounge, natch). Opening will be Speitre, who will blow you away with their homemade leather warrior costumes, cunning guitar solos and youthful visages. Are you guys really a day over 16?

Smelly has black spandex leggings on under his ripped jeans when I arrive at Mikey T’s house. This is really all the proof I need that Killbot are true metalheads, and by the end of the night, Killbot are debating what parts of Nietzsche’s The Antichrist Anton LaVey ripped off for The Satanic Bible, and there’s no doubt left. That and the fact that their two cats are named after the two holy Ls of metal: Lemmy and Lucifer.

Killbot play old-school thrash with positively shredding solos. In fact, their music tastes are so classic that I ask if they’re in their late 20s. They’re way bummed out by that question and explain that Mikey T (also a member of Negative Charge) is the oldest, at 26. Uups.

They approve of the whole thrash revival movement going on currently, proclaiming that anything with “core” in its name is probably bad. Skeletonwitch and 3 Inches of Blood are examples of “true old heavy metal.”

Killbot are not just your straight-ahead thrash band, though. Deavy Metal’s unique vocals help set the band apart, as does Mikey T’s drumming. “Mikey’s drumming is 50% of Killbot’s sound,” explains Deav. Deav’s and Smelly’s guitar playing is some of the best I’ve heard—sharp, precise, surgical, fast, like nail scissors. Deavy has been playing guitar for 13 years, and Smelly, who was influenced greatly by Paul Gilbert, for 10. Both create a dual-guitar attack onstage that sounds not unlike a meat grinder. Which can then turn the crowd into a meat grinder.

“Killbot are complete Hessians, there are lots of injuries per shows,” says Deav. “They’re mostly alcohol-fueled. After every show, there’s a pile of beer cans you can see from outer space.

“No bar shows get crazy, but at all-ages shows, there’s only been two where no one got seriously hurt. Cops get called, people get injuries they have to be hospitalized for,” says Deav. “There have been broken arms, shin injuries, and multiple instances of people getting knocked out from guitars.” Once, bassist Paul’s hair got stuck in Deav’s guitar and some of it got ripped out.

Even the shows they don’t play are prone to mayhem. In Elko, at a biker rally, Deav got arrested. “They thought I was a girl because of my tight pants and long hair,” says Deav. “Then they saw the brass knuckles in my back pocket.” It is true that between the four of them, they could make thousands selling their (seriously!) gorgeous hair to a high-quality wig company. Deav went to jail and Killbot didn’t get to play, even though they were sharing a stage with Joan Jett.

Killbot’s also played Las Vegas, at a vacant house “venue” called East Side Joe, with a half-pipe in the living room. People skated while they played in the kitchen and threw firecrackers into the crowd.

“The owners of the place paid us $12, then a biker group called Satan’s Sinners ran us out of town,” recalls Mikey T. Mikey T rode his bike to a nearby town for refuge. Killbot’s combined influences run the range from Conan the Barbarian and jazz (Mikey T) to Curtis Mayfield, bong rips and Teenage Mutant Ninja Turtles 1 & 2 (Paul), to Iron Maiden (Smelly) to Satan, old-school metal, Freud and Hannah Montana—“What?! She’s hot!” (Deavy).  Old gangster rap names are listed, along with a fascinating array of old horror movies, a couple of which I haven’t heard before, like the controversial Cannibal Holocaust and Rabid.

The band has been together for four years and have seen their share of lineup changes. Mikey T and Deav met for the first time at the Gateway Mall while Mikey was on his way to see Judas Priest in Las Vegas. He found out Deav was going to the same place, and the rest is Killbot history.

Killbot just released an awesome CD called Welcome to the Cemetery on Dec. 12, 2009, the artwork of which was done by well-known female artist HALSEYCAUST, who has done CD art for Municipal Waste and Toxic Holocaust. If you don’t go to Localized, watch Killbot play and buy their album, then you’re just dumb. 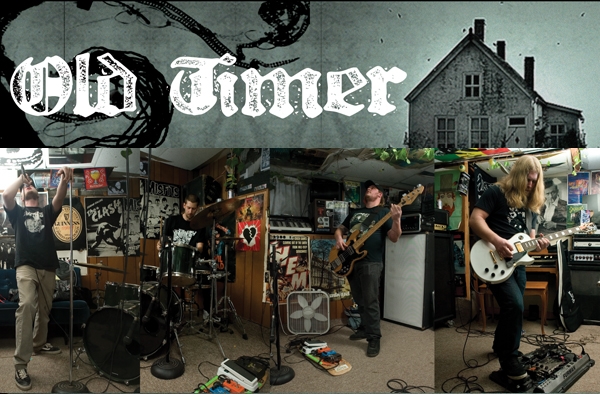 “You run the stone slab back and forth as the machine is shooting out sand at high speeds. The sand blasts the stone around the rubber stencils and creates the grooves that spell the words.”

Stone, sand and grooves … sounds like exactly the stuff stoner rock is made of. Dave Jones explains his job as a monument builder/engraver (a lot of headstones, a lot of LDS church signs), which he’s been doing since he was a teenager, while the rest of the band waits in the other room eating Sour Patch Kids and smoking. Their practice space is in the basement of the place Dave works, and is covered in the following posters: Danzig, The Clash, Reservoir Dogs, Marilyn Monroe bench-pressing, The Who, Manowar, Animal House, Split Hoof, a Them! movie poster, no less than four Misfits posters, two Clockwork Orange posters, and two identical Evil Dead II posters. “Max and I had the same poster,” says Dave Jones, explaining the Evil Dead II duplicates. ‘The posters are all the extras we had lying around all of our houses.”

Old Timer create thudding, heavy, repetitious grooves from their formidable rhythm section (think Sleep doing Mammutus, and possibly Earthless, too, simultaneously) overlaid with guitar solos that are pretty much indescribably soulful and raw, and precise as planetary orbits––about four parts Jimi H. to every one part Jimmy P. Matt has been playing the ax since fifth grade, and cites Yngwie Malmsteen, Mike Pike and Black Sabbath as influences, in addition to the two Jim(m)i/ys. He took two years of lessons when he first started, then learned for 5-6 years on his own.“I started taking lessons again when I was 16 because I started soloing and wanted to play blues guitar,” he says.

Max, whose favorite band is the Melvins, tells me the main influence on his guttural, gasoline-gurgling rasp is Cookie Monster. He laughs, the band laughs, then he insists he’s serious. Also Freddy Mercury.  Max recites some lyrics which the band has never heard before: “Cosmic imagination/First man to be formed/A cold that never died/Thoughts transformed. … Coming from the stars/Images carried with them/Idols brought from dim eras and darkened stars” and ends by saying, “And that’s good enough for me.”

Just like with Killbot, horror plays a big part in Old Timer’s music. HP Lovecraft’s Cthulu is a big influence––their song “Hibernaut” is about Cthulu and Dave Jones has a half-finished tattoo of Cthulu on his arm. One of the songs on the set list in their practice space is “Hell’s Too Full,” about zombies, and “Echohawk,” about Navajo witches called skin-walkers.

I’m a little partial to Old Timer because they happen to play my favorite genre of music—stoner rock, but also because our bands happen to share an important member in Dave Jones (he also plays in Subrosa, The Dwellers and My 3 Sons’ of Bitches). He not only fixes garbage disposals for chocolate cake, has a penchant for punctuality and is an all-around great guy, but he also plays bass like an apocalyptic chainsaw filled with sand. His SUNN amps chug out low ruin, buzz, raw viscerality. “My first paycheck when I first started working was $50,” says Dave. “I went to multiple pawn shops until I found a bass in that budget, called my friends to jam and formed a band that very day.” He picked the bass because it’s easy to start playing, but then grew to love it.“The bass is rhythmic and musical, and I love those lower frequencies. I feel like you should feel the bass as well as hear it,” Dave says.

Old Timer’s been together two years and is planning on releasing a full-length soon (they’ve already released a couple EP-ish releases), but Max says laziness holds them back. “It’s hard to write a song,” says Max. “And playing too many shows is the death of new songs. We also need to overcome our laziness to tour.” They did play Doom to Grind in Denver last year, at Blast-O-Mat, an old car wash/record shop with a venue. It was at that show that Dave McCall met Old Timer for the first time, when he was living in Denver.

Dave McCall (The Corleones, The Fucktards, My 3 Sons’ Bitches, Politically Erect) is brand new to the band––he just started a few weeks ago and is already holding down the OT stoner groove like a pro. When he was a teen, his grandma died before she could buy him the drumset  she said she’d get him, but an uncle made good on her promise and bought a set for Dave—a Mike Bordin signature series for $1700.“I knew I was going to take drums seriously, so it made sense to buy a quality set up front,” says McCall.

Dave McCall rounds out the music group and the friend group nicely, joining three guys who have all been friends for over a decade. “We go skateboarding in the summer together,” says Matt. “We yell at each other, but then we work through it.” Besides sweet Jane, friendship seems to be the ultimate unifying factor of the band—definitely one of the best reasons, if not the best reason, to be in a band at all. Well, that, and the glory that comes from playing SLUG Localized.