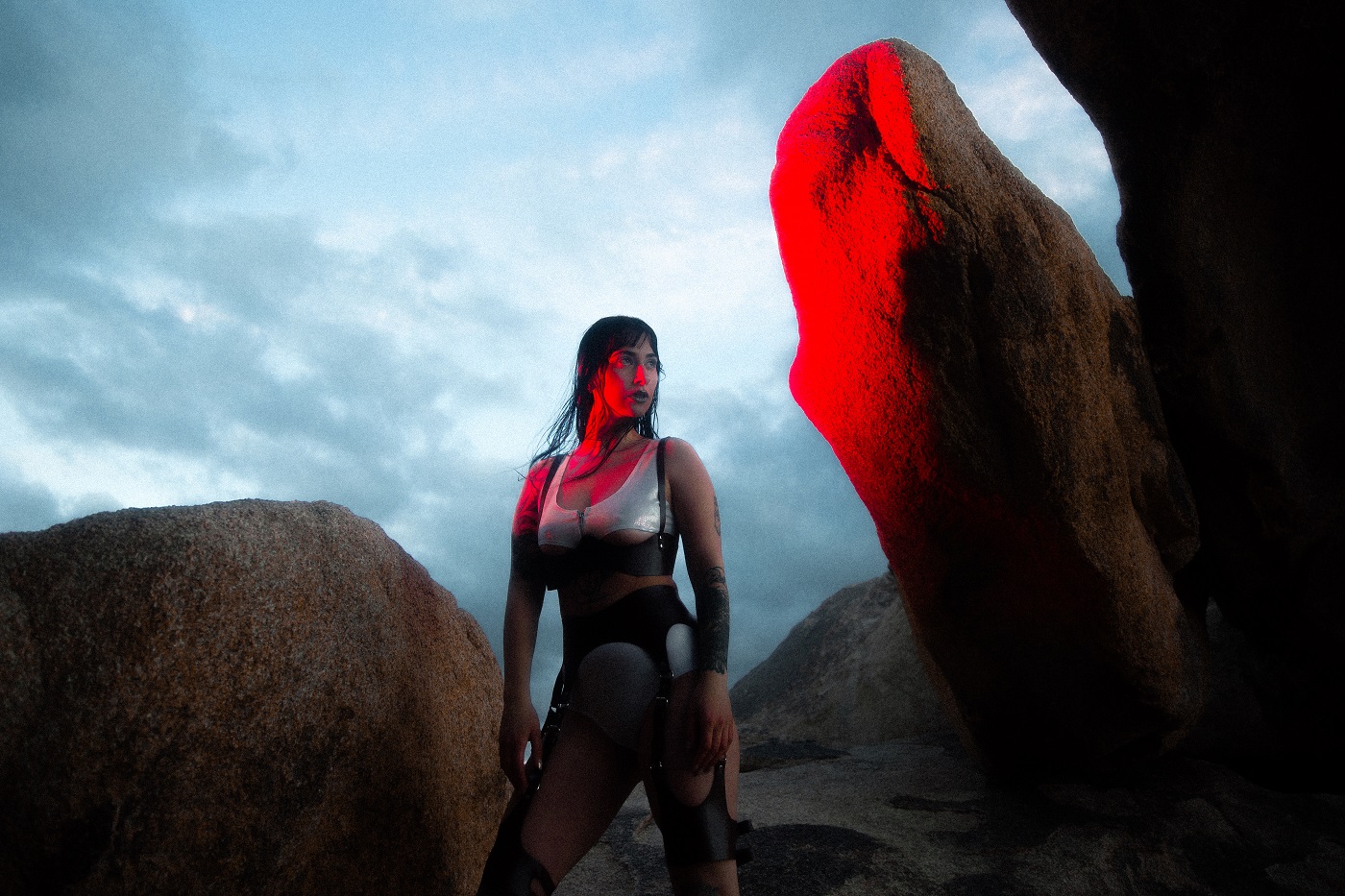 A Million Voices from One: An Interview with Pale Spring

Right around 90 seconds into “Safe,” the opening track of Pale Spring’s excellent second album, DUSK, Emily Harper Scott’s voice expands into an instantly unforgettable choir of multi-tracked harmonies. Up until this point, the track floats along a mostly monophonic setting, with the occasional double at the tail end of a phrase. After this minute-and-a-half marker, each elongated note is massive, a tiered assemblage of rich harmonics that stretches across Harper Scott’s range. This critical juncture is the first of many major statements on DUSK, an album full of cosmic-pop nuance and a total effect that synthesizes music and message into a fluid entity. It might just be the product of two people (and a few instrumental collaborators),  but DUSK sounds and feels like it’s speaking through a body beyond the scope of a single being.

If Harper Scott’s voice and songwriting shone on 2019’s CYGNUS, DUSK is a floodlight beacon of both her own artistry and that of co-producer Drew Scott (the other half of Pale Spring and Harper Scott’s partner). For the most part, the production on DUSK is sparse and stripped-back, leaving plenty of room for Harper Scott to skate and float freely. “Emily is the main instrument,” says Scott. “And her story and the vibe that she gives across [the album] is really front and center.” More so than just in the lead melody lines, Harper Scott’s vocals occupy every corner of Pale Spring’s musical villa: She’s stuttering and glitching across the splayed beat of “Please U,” her tumbling hook rolls over a self-sample that resembles a reversed wind sound on “Pulled Apart.”

This complete malleability that defines Harper Scott’s vocals stems from a number of factors. Though she notes a sustained influence from “edgier, dark R&B vocals,” Harper Scott focuses more on an inward, self-aware approach to singing: “I don’t think I’ve ever tried to sound like another singer,” she says. “Instead, I’m just [focusing on] vocal health. Trying to do things the right and healthy way and then find myself along the way.” This empathetic approach to the physicality of her voice allows Harper Scott’s to flood the space afforded her by the spacious backing beats. The smooth power of “Safe” is countered by the breathy R&B vocals of “Slow Motion,” a dustiness that’s discarded in favor of clipped and rollicking desperation of “Pulled Apart.”

The other agent in defining Harper Scott’s voice-as-total-instrument approach are the organic natures of Pale Spring’s songwriting, performance and editing processes. Each song idea begins with the thinnest outline of a beat, over which Harper Scott improvises melodies in “Gobbledygook” or a “complete alien language,” she says. From here, she’ll piece together together a final melody and craft lyrics based on that original, in-the-moment musical flow.

But Pale Spring operate on a nearly zero-waste policy, and these rough cuts are anything but lost. Rather than completely scrap unwanted half-songs or old vocal takes, Scott forms an entire instrumental ensemble out of these bits. From these studio leftovers comes the fragments of Harper Scott’s voice laced into nearly every beat. In a more extreme case, they’ll even return as the full backbone of a new song, as was the case for DUSK‘s stunning closer, “Dark,” the meat of which comes from a CYGNUS outtake.

Sometimes, however, these wordless expressions don’t even make it as far as Scott’s kitchen, and instead find themselves displayed directly through the forefront of songs. Throughout the first half of the title track, atop a bed of rich guitar harmonies, Harper Scott’s echoing vocals hang in the back of the mix and intone sounds that nearly sound like English, but continue to escape real definition. “I felt like I didn’t need words in that part to give off that kind of relaxed, carefree vibe,” she says about using the original vocal takes. If these hums preclude lingual meaning, then the track gains all the more potency as it dips into its second half, where a team of stiff, auto-tuned Harper Scotts bemoan “ghosts in my bed.”

This eerie line points to the final layer of Pale Spring’s music, the surreal imagery and emotional heft of the lyrics. “When I write lyrics, it’s almost like I close my eyes and I picture a scene and I start there,” says Harper Scott. “I feel like I return to this image of bed-ridden depression.” From the “ocean of sadness” detailed in “Safe” to the pained identity reflections of “Impact” and beyond, Harper Scott explores the tangible, visceral effects of depression. “Whatever lyric I write turns into some fantasy land of what this depressed person is thinking about while they’re in this state,” she says. Speaking of her lyrical characters in the third person situates these songs in the fertile mud between autobiography and allegory; Harper Scott tells the stories and embodies the voices of the infinite people (both tangibly existent and not) that occupy the Pale Spring universe.

“Whatever lyric I write turns into some fantasy land of what this depressed person is thinking about while they’re in this state.”

While Harper Scott certainly names and probes the dark side of mental illness, Pale Spring’s music isn’t about defeat. The narrative-driven locals of these songs (or “fantasy brain-lands,” as Harper Scott Calls them) offer relation, respite and release from these feelings. “Being able to talk about it or make something … beautiful come from that is a very freeing feeling,” says Harper Scott. “I hope that listening to this music makes people not feel so alone. Normalizes these feelings of depression, painting a picture of it being a common thing that so many people experience. That it doesn’t have to be done alone.”

On top of this continued reckoning with signature Pale Spring themes, Harper Scott expanded her lyrical focus on DUSK to encompass new terrain: “‘Please U’ and ‘Slow Motion,’ those are the first two songs I’ve written in my entire life that are explicitly about sex,” she says. “For a very long time, I felt like I wasn’t allowed to for some reason. [It was] this kind of sad, mental block of mine. Those two songs were very freeing because they let me take ownership of that. Be unapologetic about it.”

Therein lies the true beauty of Pale Spring’s music: Its subject matter may be bleak, its production chillingly bare and its overall musical approach bordering on esoteric, but Harper Scott and Scott ultimately make music that exhales and instills strength and freedom. From Harper Scott’s neon-lit, towering portrait on the cover (shot by Danny Siebenhaar) to the expansive songs and emotional catharsis contained within, DUSK screams praises about the power of change, self-affirmation and growth. In sound, style and scope, this is a championing work from Pale Spring, hopefully—and probably—one of many to come.