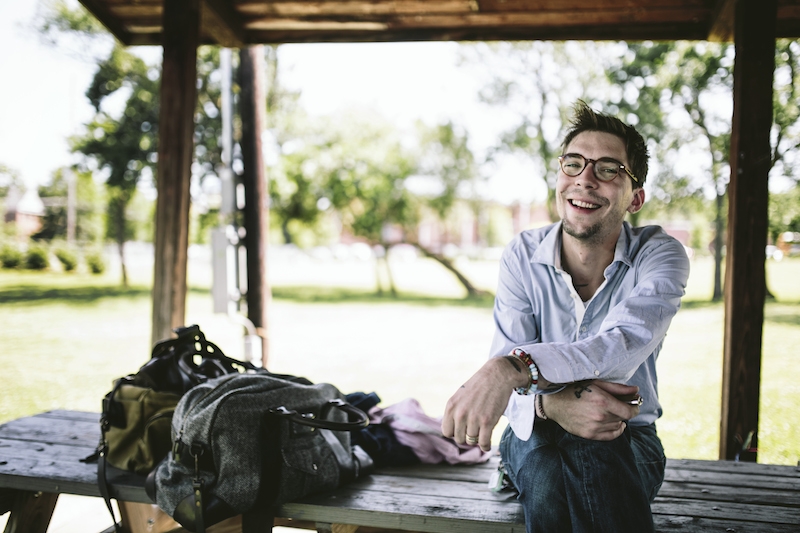 “With the new album, the tour is definitely something new for me, and I’ve had to learn a new way to play guitar,” says Justin Townes Earle. Photo: Joshua Black Wilkins

SLUG spoke with singer/songwriter and guitarist Justin Townes Earle about his new album, the state of Utah and his up coming Salt Lake City show at The State Room this Sunday, Sept. 28.

SLUG: How’s it going out there on tour?
Justin Townes Earle: It’s going real good. All the shows have been going great. My new band is amazing to play with. There a bunch of guys I’ve wanted to play with for a really long time during my career, and it’s just an honor to be on tour with them. The crowds are just great. With the new album, the tour is definitely something new for me, and I’ve had to learn a new way to play guitar. I had to get away from my complete sound filling-ish, claw–hammering guitar and do my best Steve Cropper impersonation and play no more than two strings at a time.

SLUG: So where are you guys right now?
Earle: We’re in Madison Wisconsin.

SLUG: What’s it like out there?
Earle: It’s actually really nice—almost perfect. It’s getting a little cold at night but Detroit was in the 30’s yesterday.

SLUG: Your wife is from Utah—have you experienced it beyond touring?
Earle: Well, by performing for sure, but my wife’s from Park City, and when we got married, there wasn’t a lot going on. My album was delayed by about a year due to record label issues, so I had about eight months to explore and get up into places like Guardsman Pass. My wife knows the area because she’s a big skier, so she showed me around. It’s a really amazing thing to get to see and we’d travel a lot between Pagosa Springs and Mendocino because we didn’t have much else to do, so we decided to just wander around.

SLUG: Did your wife ever take you up to go skiing?
Earle: No. I’ve never skied and at 32, I’m a little past that point in my life to learn it. My wife’s a professional downhill skier, so there’s just no way I could keep up with her.

SLUG: The first time I went skiing I was carried down in a stretcher, so I feel you. So here’s a silly question. I grew up in Tennessee, where you’re from, and did a lot of camping in those parts. Did you do a lot of camping growing up and is it anything like touring?
Earle: No. I grew up in a real urban area with my mother and she worked three jobs so we couldn’t afford camping. I never went on a vacation till I was an adult. I’d guess being on the road would kinda be similar. I have a full-size bed and a private bath, but maybe parts of it. The only time I’ve ever really been camping was when I was reprimanded to a wilderness camp for about a year. I was one of those kids who’d never seen a cow, so when I saw one I didn’t realize how big they were and it scared the shit out of me.

SLUG: You mentioned the new band with your tour but is there anything else that’s unique about this tour?
Earle: You know, I’ve grown up a lot, and the chip on my shoulder isn’t completely off, but it has started to crumble rapidly. It’s a very relaxed tour compared to the past. There’s no wild drunkenness and no bullshit. I know where my guys are gonna be, they know where they should be, so it’s definitely a unique tour as to who I use to be. It helps us to concentrate on the music. It used to be the art happened in the writing, then in the studio, but now, while performing, we can find all this inner melody that never existed before.

SLUG: Are there any songs that are becoming particularly fun to play live or that the fans are responding to?
Earle: “Today and the Lonely Night” has become one of my favorites to play—it’s just become beautiful … absolutely beautiful. In the past, my favorites were always the in-your-face, harder songs, but I’ve always tried to develop as a musician and never make the same record twice. That’s what art is today—it’s stepping into grounds you’re not too sure about and trying to learn something, and knowing the difference between when you learn something and when you aren’t ready yet.

SLUG: Is there anything you’d like to let your Utah fans know before you come out to see us on your tour?
Earle: It’s gonna be a different show. The country aspects have been dwindled down and I’m really proud of the way it turned out. The tour has been excellent and I hope everyone comes out and enjoys it.

SLUG: We look forward to seeing you, too. Thank you so much for your time.