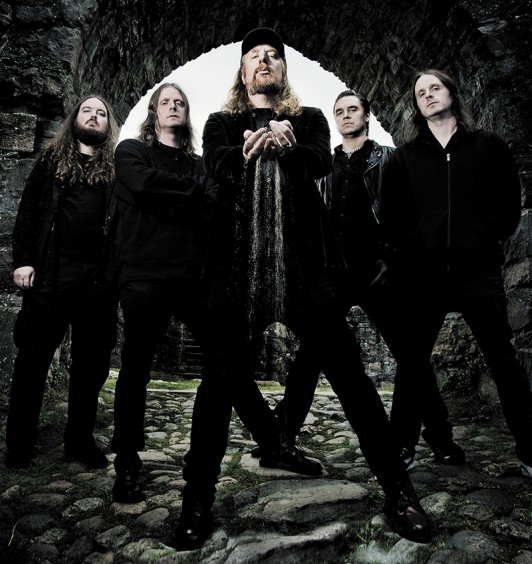 Artist(s) of the Fevered Soul: Tomas Lindberg of At The Gates

I once met a guy at a party who said that At The Gates stole the “Gothenburg” sound from Dissection. After experiencing a brief aneurism brought on by the absurd nonsense one might expect from a drugged chimpanzee in a research lab, I explained to him that At The Gates once shared a practice space with Dissection. I asked if he thought that both bands, from the same time period, were somehow not going to influence and develop alongside each other. He looked blankly at the wall, took a sip of his drink, and pissed off.

Seven years later, SLUG and I had the honor of interviewing Tomas Lindberg, vocalist of one of the most influential death metal bands in history. At The Gates released At War With Reality on Oct. 28 of last year, their first album since the legendary Slaughter Of The Soul hit shelves in 1995. “It felt absolutely brilliant to be back in the studio together,” Lindberg says via email from Nagoya, Japan, where At The Gates were on tour at the time of this interview. “It was a very intense creative atmosphere in the studio, a very positive one, though.” Lindberg feels that the labor of recording the new album was worth the effort. “We had spent a year writing this record together, and hearing the songs take form in the studio was very rewarding,” he says. “We all spurred each other on to perform on the highest level.”

Since Slaughter Of The Soul is considered by many as a go-to album of the genre, I wondered if Lindberg felt that At War With Reality stood up to not only Slaughter but their back catalog of music in terms of quality and influence. Each of their albums builds on the last, picking up and improving where the previous left off. “Our goal with [At War With Reality] was to write the most complete ATG album ever, an album that was to sum up our whole career, and at the same time move forward with a daring and progressive edge,” says Lindberg. “In my opinion, we succeeded with this, at least to our own standards. As you noticed, all our albums are different [from] each other and have a special sound, and I think this is [also the case] with [At War With Reality].”

At War With Reality is certainly a satisfying record—it’s furious, melodic and thrashy, and has some interesting surprises. However, I’m personally still on the fence as to whether it compares with Slaughter or the rest of the ATG back catalog on a grandiose scale. The At The Gates fanbase has undoubtedly had incredibly high expectations— one would wonder how Mr. Lindberg feels that the fans are reacting to the new album, both in terms of the record itself, and when the band performs the new songs live. “It has been very rewarding to meet the fans and share the experience of the new songs in a live environment—it’s almost like the new tunes go down better or at least as good as the old ones [when we play them] live,” says Lindberg. “It’s like the fans are as happy as we are that we were able to, with [At War With Reality], prove our relevance as a band in 2014.” However, he feels the pressure to excel came from within At The Gates as a band itself. “I would say that our own expectations were the highest ones. We knew that if we were happy, the album would be a goldmine—it’s as easy as that,” says Lindberg. “We consciously decided on NOT trying to second guess other peoples’ expectations—that would just hinder the creative process.”

Lindberg has been in many bands over the years: Grotesque, Skitsystem, The Crown and Nightrage, to name but a few. Lindberg says that his time in the other projects helped him improve so he was on top of his game for the recording of At War With Reality. “I think that you learn from every interaction with other people,” says Lindberg. “All the stuff we did in between the two [At The Gates] periods definitely came into the new record to a certain extent. We are a lot more experienced nowadays and know how to go around a lot of the more common obstacles. We quickly came into the [At The Gates] mode again writing [At War With Reality], though—[there] is a certain atmosphere working together [with] the five of us.”

At The Gates members were in several of the other projects together with Lindberg (Infestation, Grotesque and Skitsystem), but something is special about ATG as a unit, as Lindberg hinted. He says that he has always been extremely close with the other fellows in At The Gates. “We do hang out together a lot, even though we tour quite a lot at the moment,” says Lindberg. “We enjoy each other’s company, as we grew up together—we don’t have any fights or anything like that.”

At The Gates will be in SLC for the first time on April 2 at The Complex with Converge, Pallbearer and Vallenfyre, and Lindberg is excited to play here. He says that we can expect “a heartfelt and passionate interaction between band and audience,” and a “100-percent pure emotional outlet on all fronts. See you there!”